Breakfast on the Shore 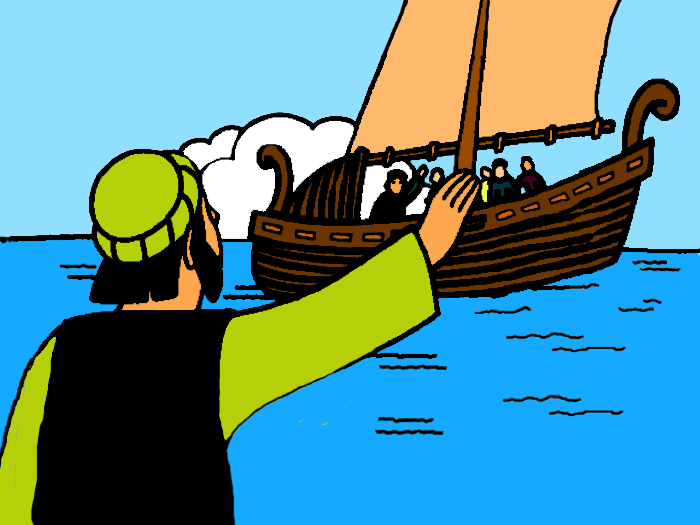 Suggested Emphasis: Jesus can forgive us when we sin.

After the resurrection, Jesus appeared to many people. One of these times was when Peter and some of the other disciples had just spent all night fishing and catching nothing. Jesus stood on the shore and yelled out to the men on the boat to cast their nets on the other side if they wanted to catch fish. Miraculously, they immediately caught lots of big fish and then joined Jesus on the shore. After cooking breakfast, Jesus talked to Peter and told him that he wanted him to “feed his sheep.” Even though Peter had denied Jesus during his trial, Jesus forgave Peter and accepted him back as a friend.

The children will remember Peter denying Jesus. Perhaps they feel sad for Peter. He wanted so much to stand up for Jesus but he really let him down when he denied him. Today’s story is special because it shows that Jesus could still be friends with Peter even though he had messed up. Jesus could forgive Peter and he can forgive us.

This whole story is similar to the first time Jesus called the fishermen to follow him and become fishers of men (Luke 5:1-11). Then and now the apostles had spent all night fishing without catching anything. Again Jesus leads them to a huge catch.

The Sea of Tiberius was another name for the Sea of Galilee. It was a beautiful lake and almost 700 feet below sea level. It was 14 miles long and 6 miles wide. The upper part of the Jordan River fed into it.

It was common practice for fishermen of this time to fish at night. The cooling waters drew fish to the surface. Fishermen could also use torches or lamps to attract fish to the surface so nets could be drawn up to catch them. They would use a large, weighted net thrown from a boat and then dragged toward shore. Sometimes two boats stretched the net between. In this case they fished all night but caught nothing.

All Christian leaders are called to “feed the sheep” or take care of the people they lead (1 Peter 5:1-4; Hebrews 13:7). Peter is not the only one. Perhaps Jesus knows that Peter needs special affirmation after the denial. Perhaps he wanted the others to hear that he accepted Peter.

Ask the children to tell you all the different kinds of places they have eaten breakfast (at the table at home, camping, in bed, in the car, in a boat, etc.) Ask them what kinds of foods they have eaten for breakfast. Share some of your own stories. “In today’s story we are going to learn about a time when Jesus made breakfast for his friends. Listen to the story very carefully. When you hear me say where he cooked the breakfast, I want you to say ‘Yum, yum!’ and smack your lips very loudly.” Do they same when I say what food Jesus cooked.
top

The apostles were all very happy that Jesus had been raised from the dead. They had seen Jesus a few times since he had been resurrected.

One day Peter said, “I’m going out to fish.” Thomas, Nathanael, James and John and two other disciples decided to go along with him.

They all went to the Sea of Galilee and got into a boat. The way the fishermen would fish was to put their nets into the water and pull them up to see if there were fish inside. People liked to fish at night because lots of fish came to the surface of the water and the fishermen could catch them. Usually that worked but not this time. Peter, James, John and the others fished all night but they did not catch any fish. They tried throwing the net on the right side and the left side but they just couldn’t catch any fish.

Early in the morning they looked up and saw someone on the beach. The man yelled and asked them if they had caught any fish. When they said no the man yelled again, “Throw your nets on the right side of the boat and you will find some fish.”

The fishermen probably wondered about that. After all, they had been throwing the net on both sides all night and they hadn’t caught anything yet. Why should they do it again?

Finally they decided to give it a try and cast their nets off the right side of the boat. When they started to pull the net up they saw that there were fish in it. There were lots of fish in the net. In fact, there were so many fish that the seven apostles could not even lift the net into the boat. They decided to head for shore and pull the net beside the boat.

Then John looked at the beach again. He took a closer look at the man standing there. Wait a minute. The man looked familiar. It was Jesus! When John told everyone Peter got very excited. He really wanted to see Jesus again so he jumped into the water. Peter made his way to shore while the others followed with the boat and net full of fish.

When Peter and the apostles got to the shore they saw that Jesus had a fire going and some fish already cooking. “Bring some of the fish you caught and we will eat them too,” Jesus said. “We will eat breakfast on the beach.”

Peter and the others brought some of the fish. There were plenty left because they had caught 153 big fish! Jesus fed the apostles a big breakfast of fish and bread. Would you like to eat fish for breakfast?
While they were eating the breakfast Peter was probably thinking back to another time when they had all eaten together. Peter loved Jesus but he had done something he was very sorry for. A few weeks ago, when Jesus and the apostles had been eating the Last Supper together Peter told Jesus that he would be willing to die for him. Then, when Jesus was arrested, Peter got scared. He did not die for Jesus. He had not been brave at all. He told people that he did not know Jesus. He denied Christ three times. Peter wondered if Jesus could ever forgive him.

After breakfast Jesus asked Peter a question. “Peter, do you really love me?”

Peter answered, “You know that I love you, Lord.”

Jesus then said, “Feed my lambs.”

Then Jesus asked again, “Peter, do you really love me?”

Peter answered again, “You know I love you, Lord.”

Finally, Jesus asked again, “Peter, do you love me?”

Peter was hurt that Jesus kept asking him. Asking the question three times reminded him of the three times he had denied Christ. “Lord, you know everything. You know that I love you.”

Jesus had forgiven Peter. He told Peter that he would someday die for Jesus. Jesus said to Peter, “Follow me” and Peter did. Peter would always follow Jesus.
top 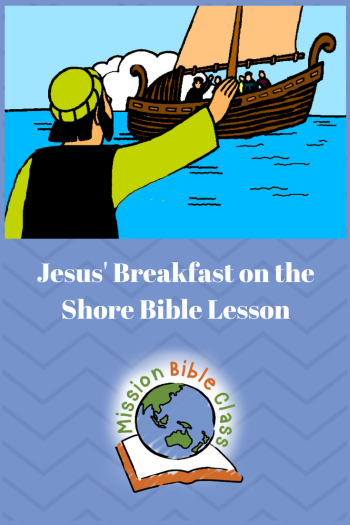