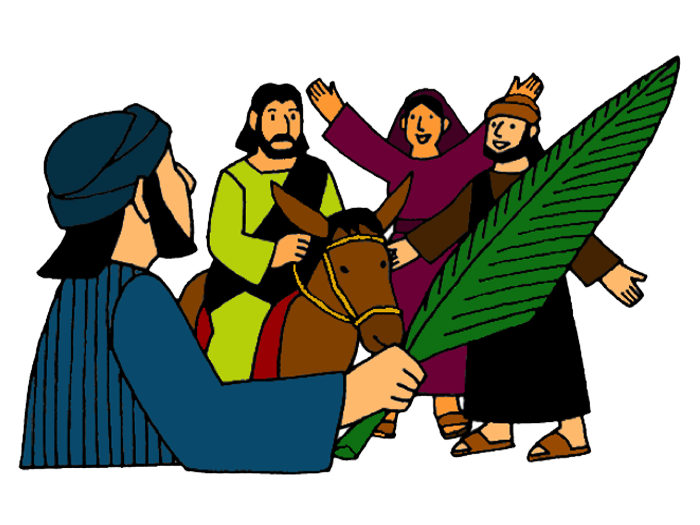 Memory Verse: “Therefore I will praise you, LORD, among the nations. I will sing the praises of your name. ” Psalm 18:49 NIV

Jesus entered Jerusalem for the last time in a most unusual way. He entered in the way that the Old Testament said a peaceful king enters a city – riding on a donkey. A great crowd waved palm branches at Jesus and cried out “Hosanna!” in praise of him.

Everyone loves a parade. This story is exciting to children when they think about crowds of people cheering and waiving leaves and branches.

This event marks the beginning of what is often referred to as the “Passion Week”. This event took place on Sunday. By the following Sunday Jesus will have been crucified, buried and risen. Some children may be familiar with the fact that some religious groups celebrate “Palm Sunday” as the beginning of Easter Week.

There were many people gathered in Jerusalem for the Passover. Probably many had heard of Jesus and his miracles.

Jesus was staying in the nearby town of Bethany and seems to return at least near there Sunday through Thursday evenings during the Passover celebrations (Mark 11:11, 19 and 14:13; Matthew 21:17). Perhaps he stayed with his friends Mary, Martha and Lazarus. Luke 21:37 mentions that he spent each night on the Mount of Olives. Bethany must have been considered to be on part of the Mount of Olives.

As they approached the city from the Mount of Olives, Jesus and the disciples would have had a good view of Jerusalem and especially the temple. Jesus sent two disciples on ahead.

To fulfil the prophecy of Zechariah 9:9 Jesus would enter the city on a donkey. War hero’s rode horses but Jesus road a donkey, which symbolised a king. The young donkey that Jesus told the two disciples to get had never been ridden. Unused animals were regarded as especially suitable for religious purposes. An example would be the cattle that pulled the Ark of the Covenant (1 Samuel 6:7).

Spreading the cloaks on the ground was also something done for kings. This was done for King Jehu (2 Kings 9:13).

The gospel writers mention branches cut from the trees. These would have been abundant around the city. John specifically mentions palm branches. Leaves of date palms grew very large. Palm branches were more likely to have come from Jericho. People might have gathered them and brought them into Jerusalem when they came for the Passover. Palm leaves symbolised triumph and victory. John saw a multitude of palm branches in his vision (Revelation 7:9).

Jesus allowed this homage even though the Pharisees wanted him to stop it (Luke 19:39). As he looked at all the cheering people he must have felt sad. In a few days they would be nowhere to be found, as he died on the cross practically alone. He wept as he looked at the city (Luke 19:41).

The people were quoting Psalm 118:25-26 as they praised Jesus. They added the word “King” (John 12:13). “Blessed is he who comes” was a Psalm sung at Passover. It was perfect for this occasion.

Before class think of specific ways you can sincerely praise each of the students in your class. Don’t praise the outward things or what they have no control over (pretty curly hair, height, new dress, etc.) but instead, praise them for good deeds and attitudes that they exhibit. Children recognize and appreciate a sincere compliment just like adults do! “Before our story today there is one thing that I would like to do. Praise is a word that means ‘to say something good about something or someone’. I would like to praise each of you children.” One by one say a good thing about each of the children in your class. Visitors can be praised for coming to class, being on time, sitting and listening nicely, etc. If appropriate, ask the children if they would like to praise anyone in the class. Make sure no one gets left out. “In today’s story people wanted to praise Jesus. They did it in a very special way. Let’s listen.”
top

When Jesus and his friends came to a village just outside of Jerusalem, Jesus stopped to talk to them. He asked two of the disciples to do a special job.

“Go into the village,” Jesus instructed, “and you will see a donkey and its colt.” (A colt is a young donkey). “Bring them to me. If anyone says anything or tries to stop you then just say: ‘the Lord needs it’. When you say that no one will try to stop you.”

The two disciples went into the village and guess what they saw? There were a donkey and its colt just as Jesus said. They untied the donkeys and began to walk away. Some people were standing nearby and they called out, “Hey, what are you doing with that colt?”

The disciples said just what Jesus said to say, “The Lord needs them.” When they said that the people let them go. It was just like Jesus said it would be.

When the disciples arrived back to the place where Jesus was they put their cloaks on top of the colt and Jesus began to ride into Jerusalem. This was very important because many years ago one of the prophets said that the king would come riding on a donkey.

Many people had heard about Jesus. They knew he had taught great things and that he had performed many miracles. He had made sick people well and made blind people see again. He even made a dead person come back to life.

The people began to do things like they do when a king rides in a parade. They shouted praises to Jesus as he passed by. They said very good things about him and shouted out how good he was. They shouted “Hosanna to the son of David!” and “Blessed is the King!”

Some of the people threw down their cloaks so that the feet of Jesus’ donkey didn’t even have to touch the dirty road. Some of the people picked up palm branches and waved them. They waved the branches and continued to shout praises. They treated Jesus like a king. People were shouting and smiling. It was like a big parade. Everyone was so happy.

Psalm 106:1 is a good verse to help us remember to say good things to God and to Jesus.

“Praise the Lord. Give thanks to the Lord, for he is good; his love endures forever.”
top

Click here to download these illustrations and slideshow. Be selective.  Each teacher is unique so only use the illustrations that best relate to the way YOU are telling the story in THIS lesson. Too many illustrations can be confusing so eliminate any that cover other stories or details you do not wish to emphasise in this lesson. 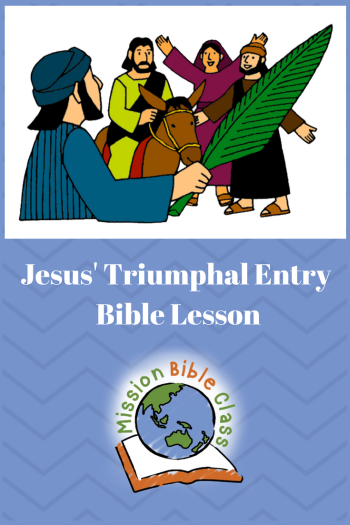