Parable of a Good Samaritan 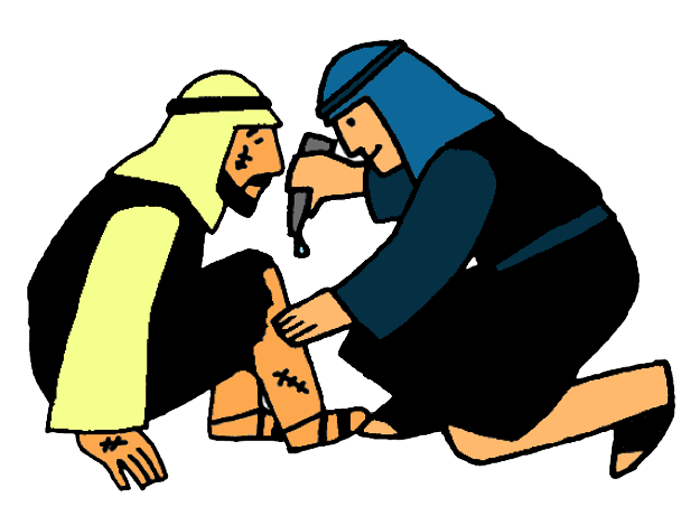 Suggested Emphasis: “Love our neighbour” by helping anyone who is in need.

Each Jew knew the command: “Love your neighbour as yourself.” When a man asked Jesus whom exactly was meant by “neighbour” he was trying to get out of his responsibility. By telling the parable of a Samaritan who helped a complete stranger, Jesus made it plain that any person who is in need is our neighbor.

In the book of Matthew Jesus referred to loving God as the “greatest command” and loving your neighbour as the command like it.  He even said that “all the Law and the Prophets hang on these two commandments”  Matthew 22:34-40.   Being an expert in the law (a lawyer) the man asking Jesus questions would have been familiar with these commands.  He would also have been familiar with the many additions to the law that the Pharisees had made.  He would rather debate the law than think about his own personal obedience.  He tries to test Jesus or trap him in his own words.  Jesus takes this potentially volatile situation and turns it into a teaching moment.

Has this ever happened in one of your classes? Perhaps one of your students is distracted or trying to draw attention to him/herself. It seems the class is slipping out of control. Here is an opportunity to tell your best story! Try what Jesus did and ask the disruptive child their opinion about one point in the story. Perhaps ask them to read a verse and say how they would have felt if they had been there. Or ask them what movie star would be best to play that bible character if there was a movie about this story. Don’t embarrass them but really find out what they think.  Then say, “Now let’s get back to today’s story.”

One way to help younger children regain focus is to give a few simple instructions – any instructions – in rapid succession (everyone stand up, everyone sit down, everyone wiggle your toes, everyone cover your eyes, and everyone open your ears!) “Now we are going to learn about God.” The attention is now on you because they are curious to hear what you are going to do next!

Again Jesus speaks in a parable. This is not an actual event but one that was believable because it could easily have happened. The distance from Jerusalem to Jericho is about 25 kilometres. This familiar road ran through rocky, desert country that provided places for robbers to hide and make surprise attacks on people.

The people listening to this parable would have been able to relate to the trouble that the man in the parable was in. It would have been a relief for the injured man to see a good Jewish priest come along. How must he have felt to see the priest pass by without helping? Another Jew, a Levite, should have also stopped but he did not.

This Jewish audience would have expected other Jews to help a Jew in obvious need. What they did not expect was the next thing that Jesus said. It was not a Jew that finally helped this man, it was a Samaritan! The Samaritans were looked down on by Jews. They were considered half-breeds and not true Jews. This goes back to 2 Kings 17:24-41 when the Jews of the northern kingdom were taken into Assyrian captivity and the King of Assyria made an attempt to resettle Samaria with his own people.

In this parable the Samaritan goes to extraordinary measures to help the man. He not only helped him in the moment of need, he got personally involved in the man’s situation. He spent the night taking care of him and then paid an inn keeper so that the man would be taken care of until he was well. Two silver coins would have been equal to two days’ wages. This would have been enough for up to two months stay in an inn.

Sometimes helping our neighbour is very difficult and inconvenient.  Sometimes it means getting out of our comfort zone or even facing some ethical dilemmas.  When Jesus challenged him with this parable even this expert in the law knew that the Samaritan had obeyed God’s command while the priest and Levite did not.

Bring a few different maps (city, country, world) to class. Help children find where they live on the map. Ask them where their neighbourhood is. “In today’s lesson we are going to learn about a parable Jesus told about neighbours . . .”
top

Once a man who was an expert in the Law of God asked Jesus a question, “Teacher, what must I do to live forever?”

Jesus told the man that he was right. That was the greatest commandment. That is the way to live forever.

Then the man asked about loving your neighbour as yourself. Did he have to love all of his neighbours or just the ones that lived close by? He asked Jesus, “Who is my neighbour?”

Instead of telling him the answer Jesus told a parable. This is the parable:

A man was travelling by himself from Jerusalem to the town of Jericho. While he was on the road some robbers attacked him. They beat him up and took everything he had – even his clothes! The man was left all alone on the road. He waited and waited for someone to come by and help him.

A priest came walking by on the road. Priests were God’s helpers in the temple. They knew how to worship God. They knew all of the rules of God. Do you think the priest helped the man? No, the priest went on the other side of the road and passed right by the man without helping.

Next, a Levite came along the road. Levites knew all of God’s laws. They were good Jews. Do you think the Levite stopped and helped the man? No, the Levite looked at the man and then crossed the road and walked right past him.

Finally, a man from Samaria came along the road. The Jews did not like Samaritans. Everybody thought that the Samaritans would never help anybody. But this Samaritan was good. He saw the man on the road and he stopped to help. He put oil and wine on the man’s wounds. (Oil and wine were used for medicine in those times.) Then he lifted the man onto his donkey and took him to a nearby inn. He took care of the man all night to make sure he was going to be well.

The next morning the Samaritan had to leave to continue on his journey. He wanted to make sure that the injured man was taken care of so he gave money to the innkeeper. He gave him enough money so that the man could stay at the inn for two months! He even told the innkeeper that he would come back next time he was travelling and pay more money if the man was still sick.

Everyone was very surprised to hear this parable. When Jesus was finished he asked the expert in the Law of God a question, “Three men went on the road that day: the priest, the Levite and the Samaritan. Which of these men do you think was a neighbour to the man who was beaten and robbed?”

What do you think the expert in the Law of God answered? That’s right, the Samaritan was a neighbour. Helping anyone who needs help is being the kind of neighbour that God wants. We don’t even have to know the person. We should help them just because they need help.
top 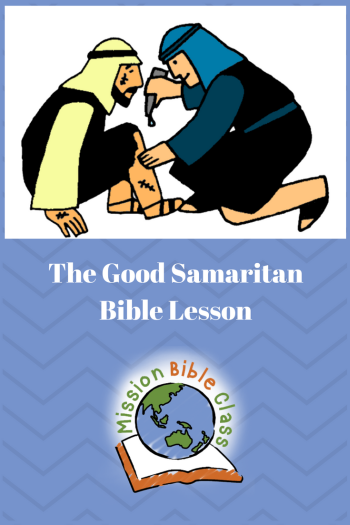