A Jailer Becomes a Christian 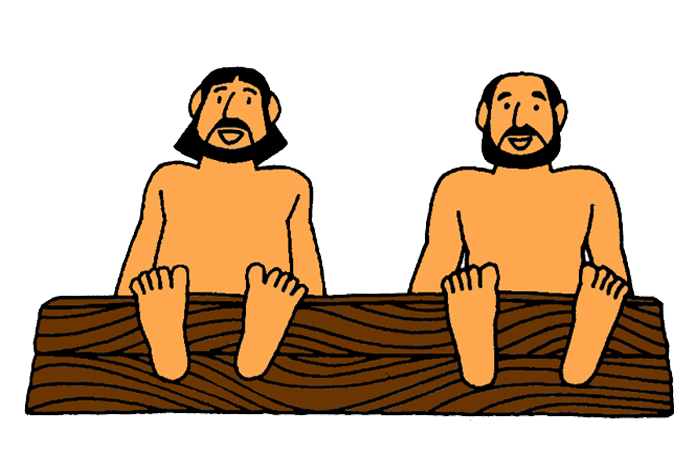 Suggested Emphasis: In Christ we can experience true joy despite our circumstances.

Memory Verse: Rejoice in the Lord always. I will say it again: Rejoice! Philippians 4:4, NIV

Paul cast an evil spirit out of a young slave girl but her owners were angry and brought Paul and Silas before the city magistrates.  Even though they were both beaten and thrown into prison they were heard singing hymns and praying to God during the night.  After an earthquake Paul and Silas taught the jailer and his household about Jesus.  Before the night was over they were all baptised.  The next day Paul and Silas were released from prison.

Philippi was a Macedonian frontier town, a Roman colony and a military outpost.  A section of the 1,120 kilometre (696 mile) Roman road system called the Via Egnacia passed through Philippi.  This meant the city was on a direct trade and military route that connected what is now modern-day Albania, the Republic of Macedonia, Greece, and European Turkey (information taken from http://en.wikipedia.org/wiki/Via_Egnatia).

The situation in Philippi was unlike earlier mission work.  There was no synagogue to attend and there were no groups of Jews who already respected God and were waiting for an expected Messiah.  Instead, Paul and his travelling companions (Silas, Timothy and Luke) started their work in Philippi by seeking out the few people who had gathered outside the city, by a river to pray.  One of these people, Lydia, along with those in her household had already become Christians.

A slave girl followed Paul and his companions yelling at them day after day while they were trying to talk to people about Jesus.  Annoyed, but knowing this girl was under the control of an evil spirit, Paul cast the spirit out.  Immediately, the girl was her true self again and no longer controlled by the unwelcome spirit.

The evil spirit had given the young woman the apparent ability to tell fortunes.  Her owners had made money off of this so were angry at the monetary loss.

Order and control would have been important in a Roman military outpost like Philippi.  There was an ongoing tension between the Roman government and the Jews so, when the gathering crowd joined the slave girl’s owners in accusing Paul and Silas, the officials would have wanted to appease everyone and not let things escalate.  There were no legal charges but it must have seemed simplest to just get rid of these Jewish outsiders in favour of the Roman citizens living in Philippi.  After all, by law Roman citizens must have a proper trial but these were only Jewish teachers from far-off Antioch and Jerusalem.  We learn later in the story (Acts 16:35) that the officials were planning on letting the crowd settle down and then, early the next morning, quietly telling the jailer (the officer in charge of the jail) to release the prisoners and send them on their way.

While hurting, bleeding and confined to a small dark place one might expect that these two men would cower and retreat into depression.  Instead, Paul and Silas did the unthinkable.  As the other prisoners listened to them they began praying and singing hymns to God.

When the earthquake struck the chains holding the prisoners were broken.  Now the prisoners could easily run out from the prison and escape.  If a jailer’s prisoners escaped then the jailer responsible would most likely have had to pay with his life.   Realising that this was probably going to happen anyway the fearful jailer drew his sword to take his own life.  At this point Paul stopped him and told the jailer that no prisoners had escaped.

Paul was not the kind of prisoner the jailer would have expected.  He invited Paul and Silas accompany him to his house to tell everyone in his household about Jesus.  Not even waiting until morning the jailer tends to Paul and Silas’ wounds then proceeds to be baptised along with everyone in his household.  In one night this man had experienced a catastrophic earthquake, watched the prison he was in charge of be reduced to rubble, had a last-minute reprieve from committing suicide and would still have to answer to his superiors in the morning but, still after his baptism…

“The jailer brought them into his house and set a meal before them; he was filled with joy because he had come to believe in God—he and his whole household.”  Acts 16:34, NIV

In the morning Paul reveals the fact that he and Silas were Roman citizens.  The magistrates had broken Roman law by beating Roman citizens publicly without a trial.  Paul could have quietly left the city but he decided to make a statement about his legitimacy as a citizen.  Likely, this would have protected Lydia, the jailer and other Christians in Philippi from unnecessary prejudice later on.  As time goes by a church is established in Philippi.  Paul will later write letter to them and the letter, the Book of Philippians, can be read in the New Testament.  The theme of the Philippian letter is joy.

There are many lessons to learn from this story and joy while undergoing trials is just one of them.  Paul and Silas rejoiced in a dark prison cell and the jailer rejoiced in his new faith despite the chaos of his life.

Teach the class how to sing “Rejoice in the Lord Always.”  You might want to combine with another class for the song.  If you do not feel confident at leading singing, ask a guest to come to your class and teach the song. “Class, did you know that those words in that song come directly from the bible? (Have one of the children look up and read Philippians 4:4) Guess who wrote those words? (Paul) Paul said to rejoice in the Lord always. Paul was happy to be a Christian even when bad things happened to him. Let’s listen to today’s story and you will see what I mean . . .”
top

Paul was a missionary.  He and his friends (Silas, Timothy and Luke) travelled to many places teaching people about Jesus.  When they were in the city of Philippi they liked to go to a quiet place by a river where people were praying.  People there wanted to know more and more.

As they were leaving the city to go to the river a young slave girl began shouting, “These men are servants of the Most High God, who are telling you the way to be saved.”  Even though that sounded like a good thing she kept following after them and yelling the same thing over and over.  Soon no one could hear Paul and his friends talking about Jesus because the slave girl was interrupting them with her shouting.

Paul became annoyed but he knew the slave girl was not acting like she would normally act.  An evil spirit was causing her to act this way.  So he turned around and said to the spirit, “In the name of Jesus Christ I command you to come out of her!” At that moment the spirit left her and she was herself again.

The girl must have been happy but she was not free to go home.  She was a slave.  To be a slave is like having a boss and doing whatever he or she wants you to do all of the time but never being paid.  But instead of a boss this person is called an owner.

When the evil spirit lived in the girl people would pay the owners money so they could come and listen to the girl tell them what would happen in their future.  The slave girl had to do what her owners said even when she was tired or sick.

The girl’s owners grabbed Paul and Silas and drug them to the market place in the middle of the city.  Magistrates are like judges in a court so the owners started telling lies and complaining to the magistrates.  The magistrates did not want any trouble so they made a decision to put Paul and Silas in prison without even having a fair court trial first.

The magistrates ordered Paul and Silas beaten and then they told the jailer (the man in charge of the prison) to guard them very carefully.

To make sure they did not escape the jailer had stocks put around Paul and Silas’ feet before putting them in a prison cell in the middle of the prison.  Then he locked the door.

Paul and Silas must have been hurting from the beating and the prison must have been dark and scary.  But they did not give up.  In fact, in the middle of the night the other prisoners were surprised to hear singing and praying coming from the middle of the prison.  Even though all of these terrible things were happening Paul and Silas still trusted God and were glad that they were Christians.

While Paul and Silas were singing hymns something amazing happened.  A huge earthquake shook the entire prison.  After the earthquake the chains fell off all of the prisoners and the cell doors flew open.

The jailer rushed into the prison and saw that all of the doors were open.  He thought all of the prisoners had escaped and knew he would be in big trouble.  He was so sure of this that he took out his sword and started to kill himself.

But Paul shouted at him to stop.  None of the prisoners had escaped.

The jailer knew that Paul had saved his life.  He took Paul and Silas to his house so that Paul could tell him and his family about Jesus.  The jailer decided he wanted to follow Jesus. He did not want to wait so he took care of Paul and Silas’ wounds and then went immediately to be baptised.

After they saw the jailer being baptised everyone in his household wanted to be baptised as well.  Even though it had been a terrible night the jailer rejoiced because he and his household now believed in God and Jesus.

The next day the magistrates decided to let Paul and Silas out of prison.  Paul reminded them that it was against the Roman law for them to put a Roman citizen in prison without a trial.  They did not want to get in trouble so they treated Paul and Silas very nicely.  Paul and Silas visited with the other Christians in Philippi and then left the city to go and tell other people about Jesus.

Years after leaving Philippi Paul will write a letter to the church there.  In your Bible this letter is called the Book of Philippians.  One of the things Paul wrote in the letter was this:

“Rejoice in the Lord always.  I will say it again: Rejoice!”  Philippians 4:4, NIV

Click here to download the slideshow or click here for the printable illustrations.  Be selective. Each teacher is unique so only use the illustrations that best relate to the way YOU are telling the story in THIS lesson. Too many illustrations can be confusing so eliminate any that cover other stories or details you do not wish to emphasise in this lesson. 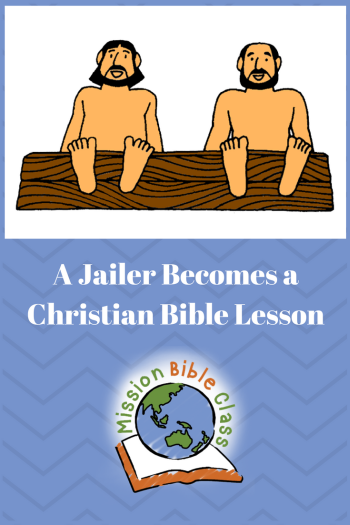