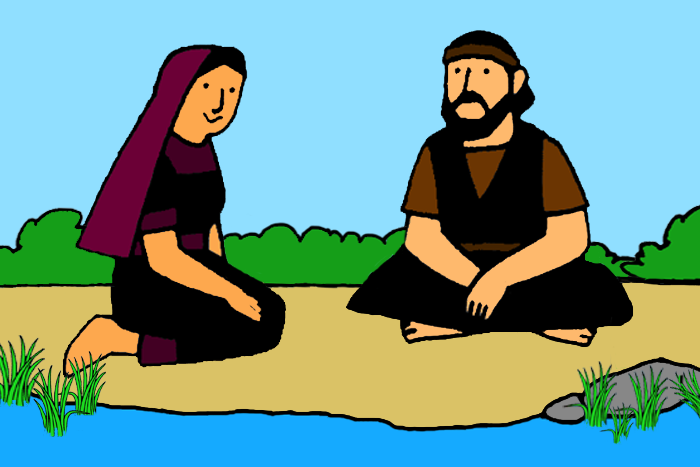 Suggested Emphasis: Emphasise that baptism is the natural response to hearing the good news of Jesus. Baptism (which means immersion) in water identifies a person with the death, burial and resurrection of Jesus.

After sailing to Macedonia Paul arrived in the city of Philippi.  When he found a group of women gathered beside a river praying he told them about Jesus.  One of the women was Lydia, a businesswoman who sold very expensive purple cloth. When Lydia heard about Jesus she was baptised.  Then everyone in her household was baptised too.  Lydia was so happy that she invited Paul and his friends to stay at her house.

Up until this point in his 2nd Missionary Journey Paul had struggled to find a firm direction for his mission work.  He and Silas, a Christian from Jerusalem, had visited Derbe and Lystra to follow up on the churches  Paul had established there on the 1st Journey.  In Lystra Paul invited Timothy to join his group and then Luke joined them in Troas.  It was in Troas that Paul received a vision of a man begging him to come to Macedonia to help. After the vision Paul and his group set out as the first missionaries in Macedonia (and subsequently the first missionaries to enter what is today Europe). 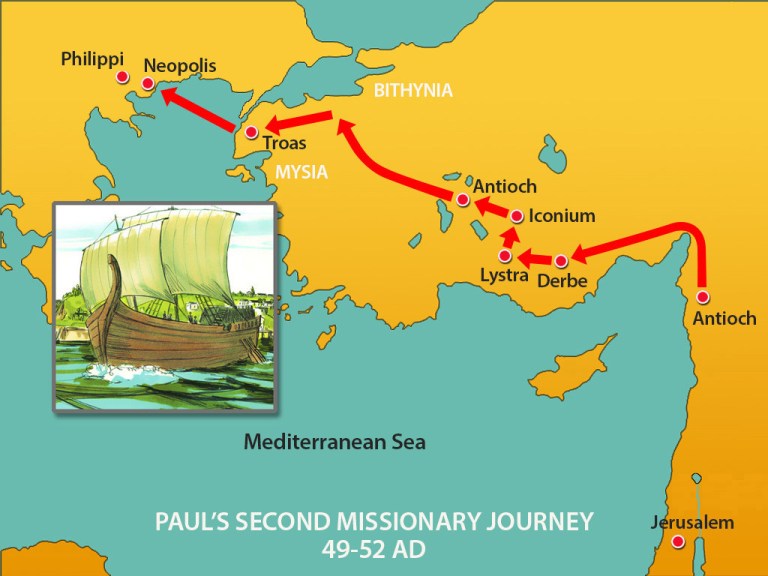 “From Troas we put out to sea and sailed straight for Samothrace, and the next day we went on to Neapolis. From there we traveled to Philippi, a Roman colony and the leading city of that district of Macedonia. And we stayed there several days.”
Acts 16:11-12, NIV

Troas was the chief port city on the north-west coast of Asia Minor.   The few ruins left of this once large and thriving city are located on the western coast of Turkey in the modern day Canakkale Province.  After leaving the port of Troas it would be common for a ship to stop and anchor off the Island of Samothrace for the night.  Paul and his group landed in Neapolis which was Philippi’s port before heading to Philippi.

Philippi was a Macedonian frontier town, Roman colony and military outpost.  A section of the 1,120 kilometre (696 mile) Roman road system called the Via Egnacia passed through Philippi.  This meant the city was on a direct trade and military route that connected what is now modern day Albania, the Republic of Macedonia, Greece, and European Turkey (information taken from http://en.wikipedia.org/wiki/Via_Egnatia).

Philippi must have seemed very different from the cities they had visited in Asia Minor.  No one was there to greet them and there was no Jewish synagogue for them to connect with.  After all the rush to get there Luke records that they “remained in this city some days”.

Going Where the People Are At (Acts 16:13-16)
When there was no formal synagogue in a city people would often use the setting of a nearby river to gather together.  This was treated as a place of prayer.  This was the case in Philippi.  A group of women indicates that there were not any Jewish men living in the city. Paul’s informal approach of sitting down and speaking with a group of women reveals the barriers he was willing to cross to share the Gospel with others.

One of those listening was a woman from the city of Thyatira named Lydia, a dealer in purple cloth. She was a worshiper of God. The Lord opened her heart to respond to Paul’s message. When she and the members of her household were baptized, she invited us to her home. “If you consider me a believer in the Lord,” she said, “come and stay at my house.” And she persuaded us. Acts 16:14-15

These two verses reveal a lot about the woman, Lydia:

When she heard Paul share the good news about King Jesus, Lydia’s response was to be baptised.  Although there are a variety of practices today the original Greek word for baptism actually means to be immersed.  Later, Paul will write in his letter to the church in Rome that in the physical act of baptism a person identifies with the death, burial and resurrection of Jesus by dying to self, being immersed (buried) in water and coming up again to live for Jesus.

Since this story is a bit shorter than other conversion stories in Acts use the extra class time to talk about baptism and its importance in our Christian journey.  Other Scriptures About Baptism and how our response connects to Christ’s Death, Burial and Resurrection:

After baptising Lydia, Paul and Silas continue teaching people about Jesus in Philippi.  Read about the Jailer Who Became a Christian to learn about another person who is baptised in response to the Gospel message.

As time goes by a church is established in Philippi.  Paul will later write letter to them and the letter, the Book of Philippians, can be read in the New Testament.

How many of you know someone who has been baptised? What happened? (Share your own experience) In today’s story we are going to learn about a woman named Lydia who was baptised.
top

Paul and his friends Silas, Timothy and Luke were missionaries. Missionaries travel wherever God wants them to go so they can tell people about Jesus.

Paul and Silas had travelled all the way from Antioch. Now they and their friends were on their way to Macedonia. Macedonia was in Europe so this was the very first time that people in Europe heard the good news about King Jesus.

The first place that Paul and the other missionaries stopped was in the city of Philippi. The Roman government was in charge and there were many Roman soldiers in Philippi.

Usually Paul and the others would have gone to a synagogue on the Sabbath day. A synagogue is a place where Jews gathered together to worship and learn about God. But there was no synagogue in Philippi.

So, on the Sabbath day the men went down to the river to find a place of prayer. There was already a group of women at the river and they were praying.

One of the women was Lydia. She was a business woman whose job was selling purple cloth. She had her own house and workers. Lydia was a worshipper of God but she did not know about Jesus.

So Paul began to talk to Lydia and tell her about Jesus. Jesus was God’s Son and he had died on the cross for her sins. Lydia learned that after Jesus died he was buried and then rose again on the third day and ascended to the throne of God to rule as the world’s true king.

When Lydia heard about Jesus she believed in him. She told Paul that she wanted to become a follower of King Jesus. She wanted to be baptised.

Lydia wanted to spend more time with Paul and his friends so she asked them to stay at her house so she could give them food and take care of them.

What a happy day for Lydia and all the people with her. Now they were part of the Christian family.

Click here to download the slideshow or click here for the printable illustrations.  Be selective. Each teacher is unique so only use the illustrations that best relate to the way YOU are telling the story in THIS lesson. Too many illustrations can be confusing so eliminate any that cover other stories or details you do not wish to emphasise in this lesson. 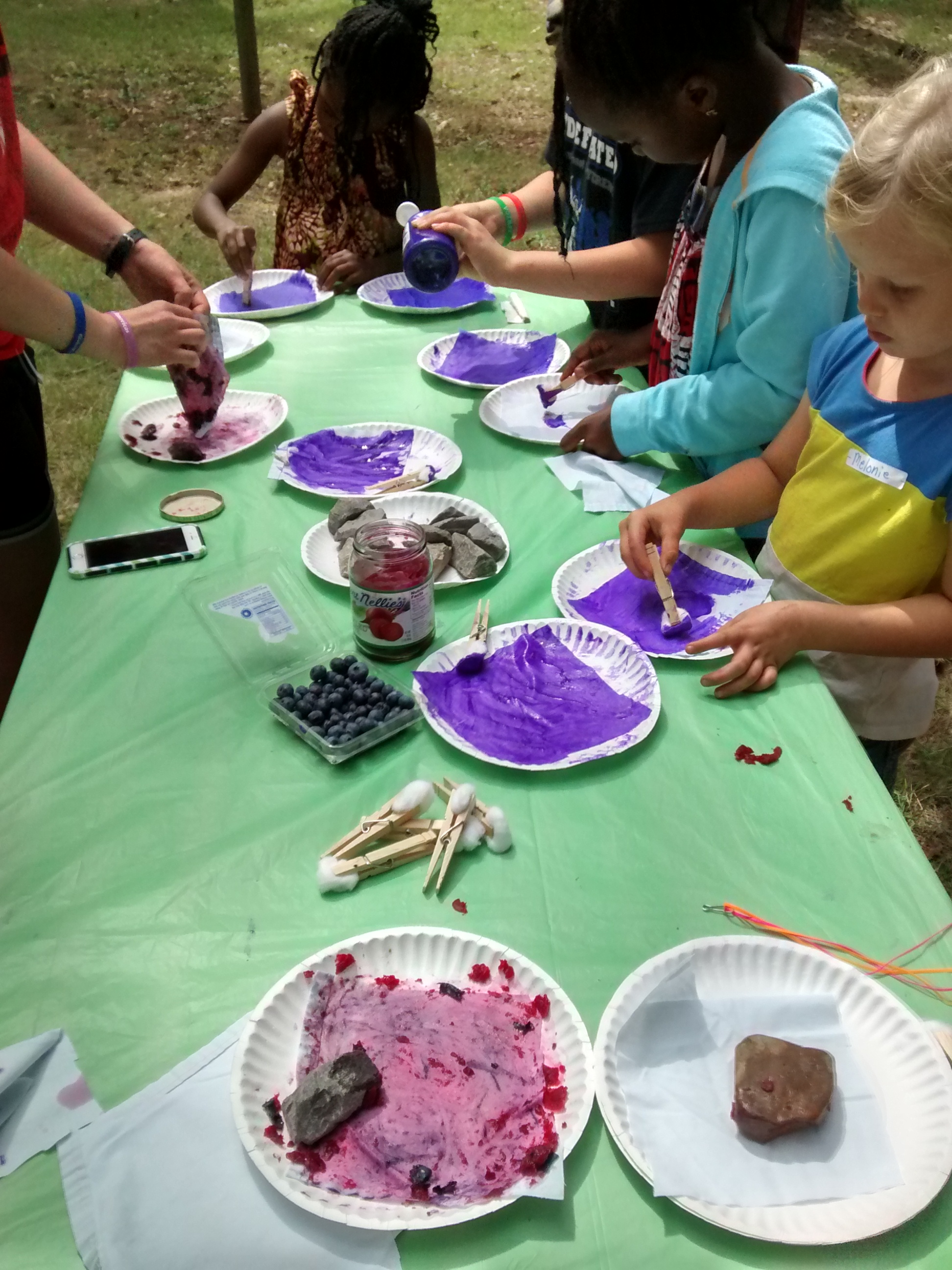 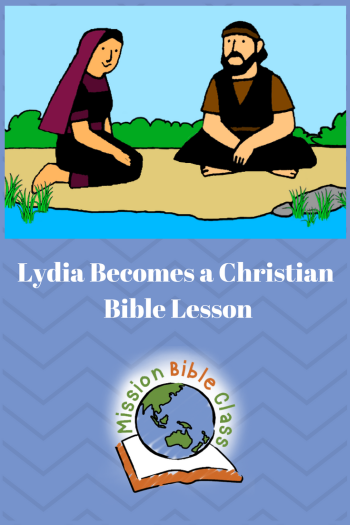