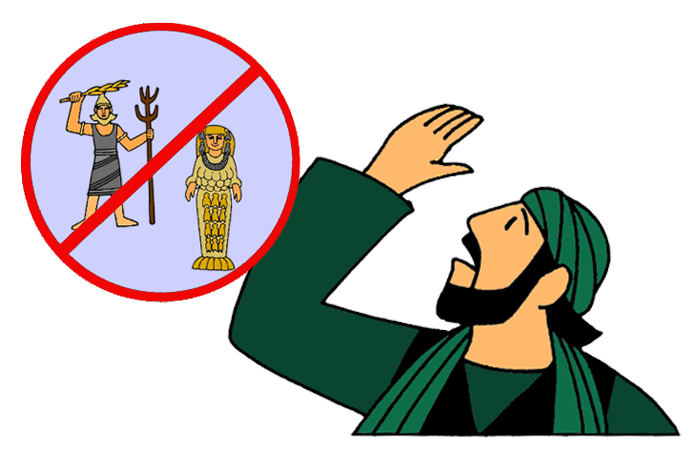 Suggested Emphasis: God is the only one worthy of our worship. We can not think or act like any person or thing is more important than him.

Paul continues his 2nd Missionary Journey by stopping in the wealthy and cultured city of Athens.  Idols and altars to false Gods filled the city. Paul was able to address a group of philosophers meeting on a rock hill called the Areopagus (Mars Hill).  Idols were man’s attempt to make gods but Paul preached that men cannot make God.  God has made man and all that is in the world.  There is only one God and it is wrong to put anything above him. 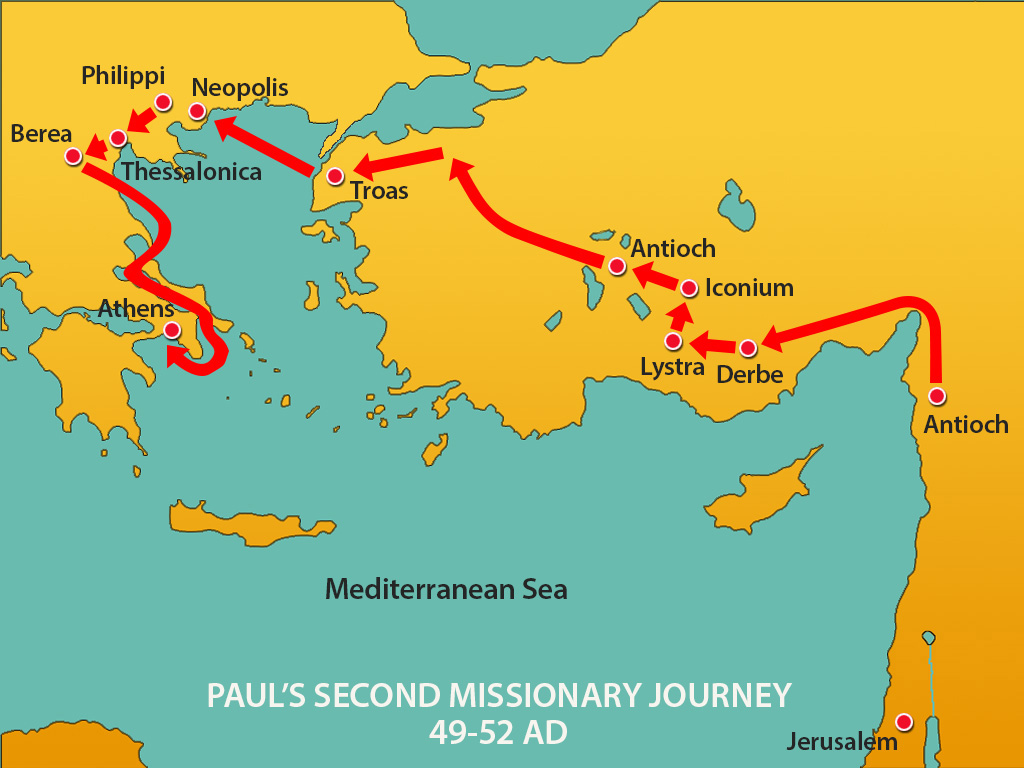 This lesson is a continuation of Paul’s 2nd Missionary Journey.  He and Silas had set off from Antioch and travelled across Asia Minor re-visiting the churches that Paul and Barnabas had established during their 1st Missionary Journey.  In Lystra a young man named Timothy joined them on the journey.  After many attempts to take the Gospel message north Paul received a vision of a man in Macedonia begging him to come and help them.  Going on to the Macedonian city of Philippi Paul and his group taught and converted a woman named Lydia and a Jailer from the prison along with the people in their households.

In both Thessalonica and Berea Paul began sharing the good news of Jesus by first addressing the Jewish community in the local synagogues.  Some Jews began following Christ while others used violence in an attempt to stop Paul and his companions from sharing the Gospel message.  The new Christians in Berea escorted Paul to Athens for his own safety.  The lesson today begins with Paul scoping out Athens while he waits for Silas and Timothy to arrive from Berea.

Athens was a wealthy city and full of culture.  At the time Paul was there the population was probably around 250,000 people.  The city had once been at the centre of the Greek Empire but even after losing its power and being controlled by a variety of different rulers it had never been forced to lose its reputation and cultural status.  Athens was now part of the Roman Empire

“but was granted local independence in recognition of her great history. As the seat of Greek art and science, Athens played an important role even under Roman sway-she became the university city of the Roman world, and from her radiated spiritual light and intellectual energy to Tarsus, Antioch and Alexandria…Although the city had lost her real independence, the people retained their old characteristics: they were still interested in art, literature and philosophy.”  Quoted from:  http://en.wikipedia.org/wiki/Classical_Athens

Athens was and is a city with many temples, altars, idols and statues.  To an educated and conscientious Jewish teacher like Paul this must have felt like an attack on the sovereignty of God.  The writer of Acts says that “…he was greatly distressed to see that the city was full of idols.” Acts 17:16 NIV

An idol is an image or representation of a an object of worship.  Or it can be a person or thing that is greatly admired, loved, or revered.  In Athens there were idols built to many different gods.  In case they accidentally left any out there were even idols with the inscription “To an unknown God”.

As was his custom, Paul first met with the Jewish community in the synagogue.  The Jews were awaiting a Messiah. In Jesus God had fulfilled his promises so speaking to Jews was the logical place to begin sharing the good news .  But Paul did not stop with the Jews and others who already believed in God.  The gathering place in cities of the time was called an “agora”.  Paul entered this area full of people and markets and spoke about Jesus there.

In Athens today the remains of the agora are overlooked by the hill called “the Areopagus” (or, Mars Hill, as the Romans liked to call it in honour of Mars, the God of war).   The Parthenon towers over both.  Even now one can climb onto the Areopagus and see in the distance some of the same temples and statues in Athens that Paul would have seen throughout the city.

Paul’s former education under the great teacher, Gamaliel (Acts 22:3) provided him with knowledge of philosophy and literature.  This would have helped him greatly as he addressed the philosophers who met on the Areopagus.  But it would only be through  the power of the Holy Spirit that he would have been able to courageously preach a sermon directly opposing the very things Athens stood for.  In the history of Athens this group had performed a governing role and even now they had say over any new religions introduced into the city.

Upon hearing Paul speak some of the philosophers sneered while others wanted to enter into more discussion.  But Paul knew that many people in Athens only wanted to sit around discussing things never intending to take action (Acts 17:21).  Perhaps this is the reason he left the meeting after giving his sermon.

Only a few people in Athens chose to follow Christ.  One was a member of the Areopagus and another was a woman named Damaris.  After this short time in Athens Paul continued his journey by heading for the city of Corinth.

The Athenians had created so many images that they did not even always know what the images were supposed to represent.  But an idol does not have to be a statue.  Any person or thing that we devote time to, admire or revere more than God could be referred to as an idol.  This could be such things as sports figure, hobbies, TV, or even ourselves.  The definition of an idol from the online Meriam Webster Dictionary is:

Before class cut five small pieces of paper for each student. In class ask the students to use the papers to write down their five most favourite things in the whole world. After everyone has done this then ask them to put the cards in order with the most important thing first. Lead the discussion so that the children will see how that the most important things seem to take the most time, money, etc. Hopefully some of the children will have put “God” on one of their papers. I f they haven’t then give them an extra card so that they can do so now (without embarrassing them). “In today’s story we are going to learn about a city that thought that their idols were the most important things in the world. (Idol- anything that is worshipped above God -often a statue or carving)”
top

Paul’s 2nd Missionary Journey began in Antioch. He and Silas travelled through Asia Minor visiting the churches that Paul had helped establish on his 1st Journey. Then they sailed across the Aegean Sea to teach people in Macedonia. These men travelled wherever God wanted them to go to teach people about Jesus.

When Paul arrived in the city of Athens he looked around and saw many idols. The people of Athens were worshipping these idols instead of worshipping God. Paul was very distressed to see this and he wanted to tell the people about the real God and his son, Jesus.

The first thing Paul did was to go to the synagogue and talk to the Jews about Jesus.  The he went to the agora (the place in the city where people liked to meet) and told people there about God and Jesus. While he was talking in the agora some men overheard him. They were part of a group that met up on a big rock hill called the Areopagus and they wanted Paul to come and meet with them.

The men at the meeting of the Areopagus were an important group that met together to talk and think. Sometimes, instead of actually doing anything, they just liked to sit and talk about it instead.

The city of Athens had many kinds of idols and altars and the men of the Areopagus were the ones that decided whether or not people could bring new ones into the city. They asked Paul to tell them about the new ideas he was talking about to everyone.

So Paul told them that he had been looking at all of the idols around Athens. He had even noticed an idol with a sign on it that said, “TO AN UNKNOWN GOD” They were worshipping what they did not know but he would tell them about the God that he knew. He wanted to tell them about the only true God.

He said that all of the idols they were worshipping were made by people. But that didn’t make sense. People can’t make God. It is the other way around. God makes people! Paul then told them that they should stop worshipping idols. God is more important than any person or thing in the world so they should only worship God.

And finally Paul told them one more very important thing. He told them that Jesus died and that God made him alive again. By doing this God had given them proof that his is real.

Not very many people in Athens decided to become followers of Jesus but a few did. One was one of the men of the Areopagus and one was a woman named Damaris. But the time came for Paul to leave to go to other cities and tell people about God and Jesus. He hoped that the people of Athens would learn to worship God someday.
top