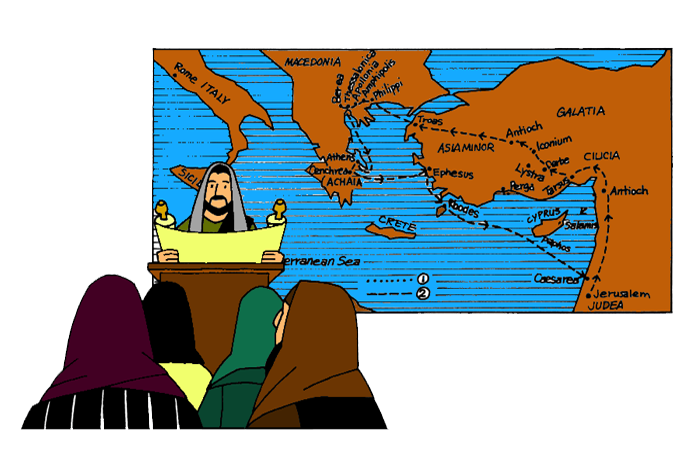 Suggested Emphasis:
Study the Scripture to know the truth.

Memory Verse:
“Do your best to present yourself to God as one approved, a worker who does not need to be ashamed and who correctly handles the word of truth.” 2 Timothy 2:15

Paul continues his 2nd Missionary Journey by visiting the cities of Thessalonica and Berea. In Thessalonica a number of people began to follow Jesus but others were jealous.  They started a riot that resulted in Paul’s exit.  In Berea the people received the message of Jesus with great eagerness and examined the Scriptures every day to see if what Paul said was true.  Paul noted they were of noble character.  Many became Christians.   Things were going well until some people from Thessalonica heard about it and came to Berea to stir up trouble again.  For his own safety Christians in Berea escorted Paul to Athens and arranged for Timothy and Silas to join him there later. 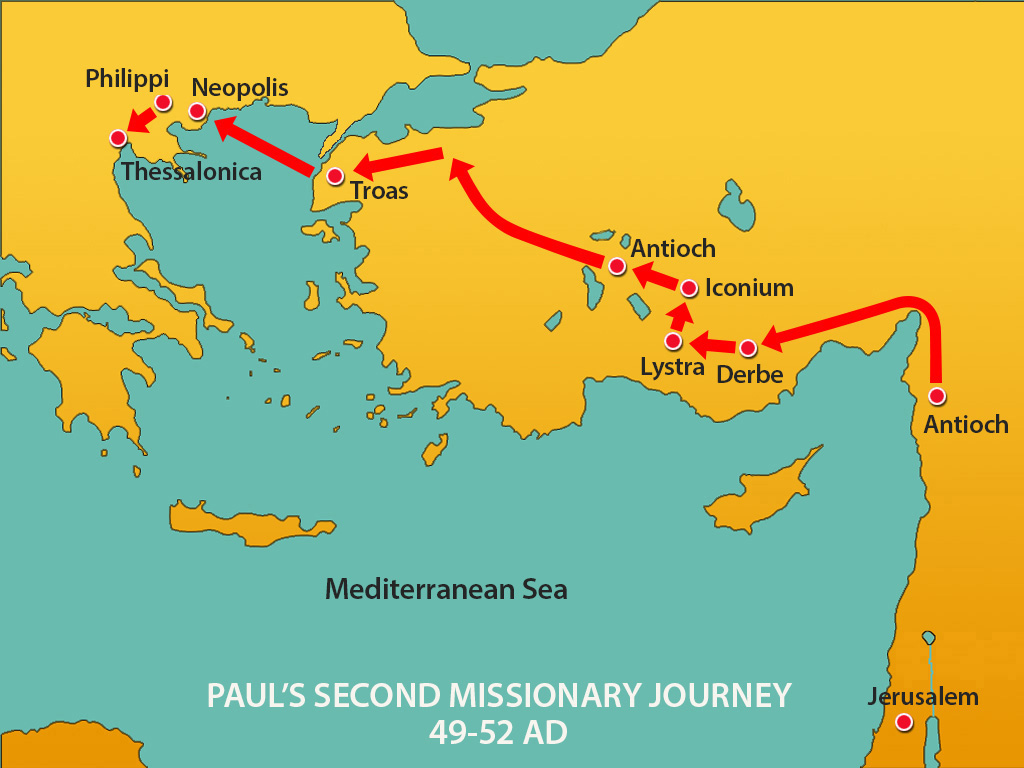 This lesson is a continuation of Paul’s 2nd Missionary Journey.  He and Silas had set off from Antioch and travelled across Asia Minor re-visiting the churches that Paul and Barnabas had established during their 1st Missionary Journey.  In Lystra young Timothy joined them on the journey.  After many attempts to take the Gospel message north Paul received a vision of a man in Macedonia begging him to come and help them.  Going on to the Macedonian city of Philippi Paul and his group taught and converted Lydia, a Jailer and their households.

To understand what later happens with the noble people of Berea we must first explore the events that happen in Paul’s next stop, Thessalonica.

Thessalonica:
Paul heads south to the port city of  Thessalonica which is now the modern-day city of Thessaloniki, Greece.  Paul would have travelled along the Via Egnacia from Philippi to Thessalonica.  The Via Egnacia was a 1,120 kilometre (696 mile) Roman road system that connected a string of Roman colonies from the Adriatic Sea to the Bospherous.  Like other major Roman roads, it was about six metres (19.6 ft) wide, paved with large polygonal stone slabs or covered with a hard layer of sand (information about the Via Egnacia has been taken from http://en.wikipedia.org/wiki/Via_Egnatia).  All of this makes for travel relatively easy and quick.

Paul had last come from preaching in Philippi where there was no Jewish synagogue but Thessalonica had a synagogue and Jewish community.  Just as he had done many times before Paul begins his mission work in the city by first visiting the synagogue.  Paul’s education and background allowed him to speak in Jewish gatherings (see his speech in Jerusalem Acts 22:3).

Some of the Jewish leaders were unhappy to see members of their synagogue and even people from the community following these men and turning to this new group.  They were angry and convinced people of bad character to form a mob and start a riot.

A man named Jason was accused of housing Paul.  Jason was dragged in front of the city officials.  His accusers falsely accuse him with the high Roman offense of treason.  To them there was only one king and that was Caesar.  It was treason for Paul to teach that Jesus was actually the king over all.

The bond finally charged was sort of like a guarantee by Jason that there would be no more trouble.

As time goes by a church grows and becomes established in Thessalonica.  Paul will later write letters to them and the letters,  1 Thessalonians and 2 Thessalonians, form part of the New Testament.

Berea:
Berea is now known as Veria, Greece and it is 73 kilometres (just over 45 miles) west-southwest of Thessaloniki. 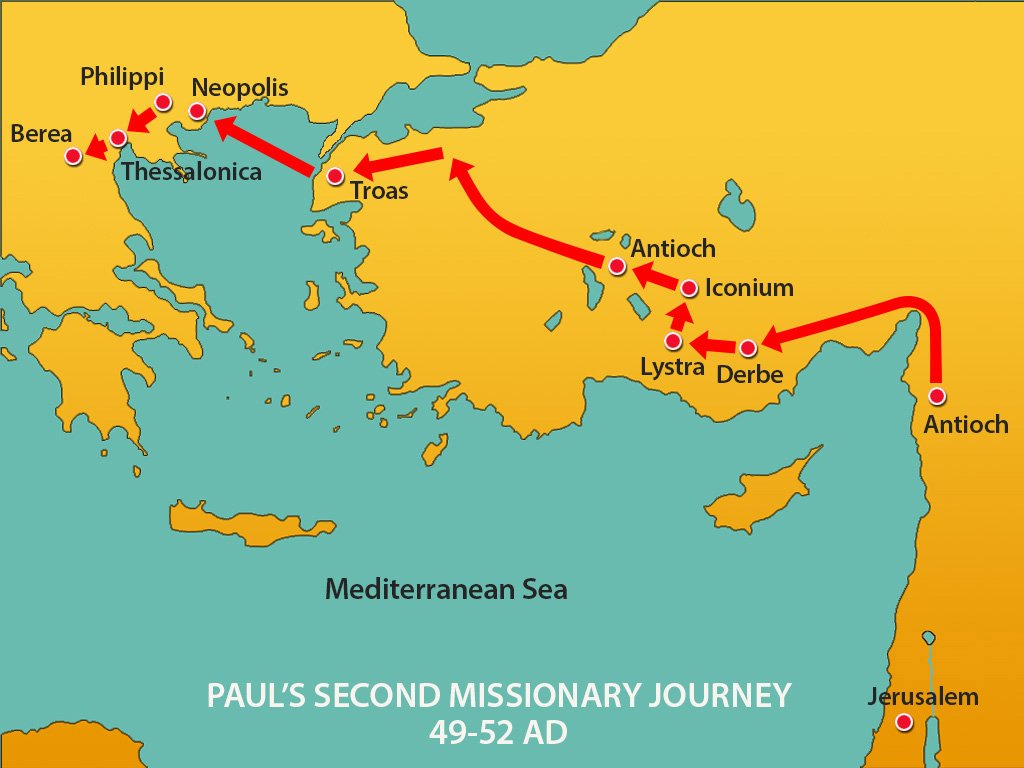 Again, Paul and Silas begin their missionary work in this city by first visiting the local synagogue.  The only Scriptures Paul and Silas would have used would have been those of the Old Testament.  The documents that would make up the New Testament had not yet been written.  But Paul knew that Jesus had been prophesied about throughout the Old Testament.  In fact, the Jews were awaiting a Messiah.  God was fulfilling his promises through the Jewish nation so speaking to Jews was the right place to begin.

The writer of Acts points out that the Bereans were of more noble character than the Thessalonians.  They were called noble because

The Jews that had caused so much trouble in Thessalonica heard about Paul’s success in Berea.   They travelled over to Berea for the express purpose of stirring up trouble.  This action just confirms Paul’s statement about their lack of noble character.

Again, the Christian brothers stepped in to protect these missionaries.  Silas and Timothy stayed in Berea but Paul was sent to the coast.  This either meant he was going to sail or follow the road along the coast to his next destination.  The brothers escorted Paul to Athens and arrangements were made for Silas and Timothy to join him as soon as possible.

Study of God’s Word
The noble people of Berea are a good example for us.  With open minds and hearts, they were eager and open to what God had to say to them.  But, at the same time, they were willing to study the Scripture to make sure that whatever a preacher was saying measured up to what God had said in His Word.  Encourage children to always compare what they hear to what the Scripture says.

Here are some verses about the importance of Scripture.  I especially like the first one because it is from a letter that Paul later wrote to Timothy.  Paul knew Timothy’s mother and grandmother had taught him Scripture since he was a small child.

Make sure every student has a bible (Old and New Testaments) and have a “sword drill” (The name of this game comes from the Bible being referred to as a sword in Hebrews 4:12 and Ephesians 6:17).  The teacher calls out a scripture (make sure you do some of the memory verses!) and the students all search for the verse in their bibles. The first one to find it and read it and begin reading it out loud is the winner of that round. Play a few rounds. Point out the importance of knowing how to search for scriptures in the bible. “In today’s story we are going to read about two cities where Paul preached. Most of the people in one of the cities did not search the scriptures. Paul left there and went to another city where the people studied God’s word. Luke, the writer of Acts, called these people noble.”
top

Paul’s 2nd Missionary Journey began in Antioch. He and Silas travelled through Asia Minor visiting the churches that Paul had helped establish on his 1st Journey. Then they sailed across the Aegean Sea to teach people in Macedonia. These men travelled wherever God wanted them to go to teach people about Jesus.

One of the places where Paul and Silas preached was in the city of Thessalonica. There were many Jewish people in this city and they would often gather together in their meeting place which was called a “synagogue”. Since Paul was an educated Jewish teacher he went to the synagogue to tell the other Jews about Jesus.

The message that Paul had for the Jewish people in the synagogue was that the Messiah had come and that the Messiah was Jesus. He had died on the cross but was raised up alive again to reign as world’s true king and so that everyone could be saved from the power of sin and death.

But not all of the Jews believed what Paul was saying about Jesus. Some did not believe Jesus was the Messiah and did not want anyone else to believe it either. They were jealous that so many people were listening to Paul and Silas.

These were not nice people. They found some bad people in the town and got them to cause trouble and make everyone angry. They thought that Paul was staying in the home of a man named Jason so they rushed to Jason’s house. Paul wasn’t there but they drug Jason out of his house and took him to the court officials.

Jason was innocent but the men kept accusing him and his friends of causing trouble in the city. Finally, the court officials told Jason that he could go back home as long as he paid money to them and promised to stay out of trouble.

Thessalonica had become a dangerous place to be so that night some of the Christians helped Paul and Silas leave the city. They sent them to the city of Berea.

When he arrived in Berea Paul went straight to their synagogue to tell the Jewish people of Berea the good news that Jesus was the Messiah. But when Paul spoke to them he found that they were very different from the people in Thessalonica. Luke writes that the Bereans were “more noble”.

A noble person is one who has good personal qualities and is moral in character as evidenced in their having an open mind and heart. The noble Bereans listened carefully to what Paul said and then studied the Scripture to learn more. They read about what God had to say about the Messiah. They knew the Scripture was true and they wanted to make sure that everything Paul said agreed with what God said.

And it did! Jesus really was the Messiah. Jesus was the King of the whole world! Because of this many of the Bereans in the synagogue decided to follow Jesus. As Paul and Silas continued to speak with people many other people besides Jews became followers of Jesus too.

Paul and Silas and even their friend, Timothy continued to talk to people about Jesus in Berea. But, meanwhile, the news got back to Thessalonica and the angry Jews from there travelled to Berea to cause trouble. Soon they convinced some people in Berea to be angry with Paul. Paul’s life was in danger.

Now Berea had become a dangerous place for Paul. But the Christians in Berea made sure he was safe. They took Paul to the coast and then they escorted him down to the city of Athens. They promised to send Silas and Timothy to him soon.

Paul remembered the noble Christians in Berea but, as he looked around at all of the idols in Athens, he knew that these people needed to hear about God and Jesus too. There was still much work to do.
top

Click here to download the slideshow or click here for the printable illustrations.
Be selective. Each teacher is unique so only use the illustrations that best relate to the way YOU are telling the story in THIS lesson. Too many illustrations can be confusing so eliminate any that cover other stories or details you do not wish to emphasise in this lesson. 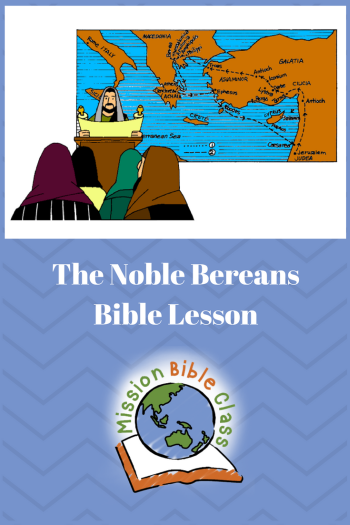