Philip Teaches the Man from Ethiopia 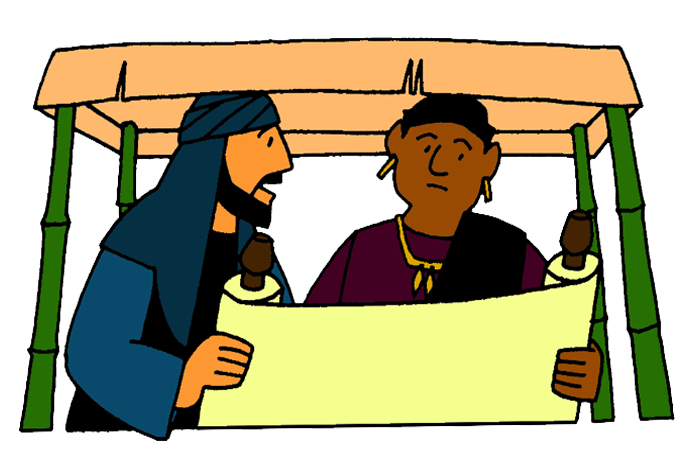 Suggested Emphasis: Teachers, preachers, elders, and other Christians can help us understand the bible.

An angel of God told Philip to go to a certain desert road that led to Gaza. Philip followed the angel’s instructions and found a very important man riding in a chariot. This man was from  Ethiopia and a chief official of the Queen. He was reading from a scroll of Isaiah but was not able to understand it. Philip got into the chariot with the man and began explaining what it meant and that it pointed to Jesus. When the chariot passed some water, the official asked Philip to baptize him (and he did!)

Philip was a respected and faithful man who was one of the seven deacons first appointed in a congregation of disciples of Jesus.   The church first began in Jerusalem among the Jews but, following the Stoning of Stephen, a great persecution rose up against the followers of Jesus and they left Jerusalem in large numbers.  Followers of Jesus, like Philip, began teaching people about Jesus wherever they went.  This meant the good news of King Jesus spread out from Jerusalem to a wider and wider circle of people.  Philip’s first stop was Samaria where he taught many, including Simon the Sorcerer.

Ethiopia probably refers to ancient Nubia which is present day southern Egypt and northern Sudan.  “Candace” was a title used for the leading woman of the country so the Ethiopian Eunuch would have had a very important and trusted position as “an important official in charge of all the treasury of the Queen.  Men placed in charge of the living quarters, the harem in particular, were sometimes made eunuchs (castrated) but the term “eunuch” could also be used in a more general way for an official or officer.

Special Note to Teachers:  More than one teacher has been flustered when a child asks the completely natural question, “What is a eunuch?”  For younger children I have just answered that a eunuch was a special servant to the queen and was not allowed to have girlfriends, wives or children.  For the older child I have just said that a eunuch is a man who has had an operation that makes him unable to father children.  If an older child was being genuinely curious (and not asking to seek attention) I would consider telling him or her that castration involves removing the testicles.  But, in that case, I would mention it to the parents after class so they can follow up at home if needed.  We want to encourage children to ask questions about God’s Word so never make a child feel it is not acceptable to ask.   Be a teacher that children can trust to give straight answers.

The Ethiopian was probably a proselyte (a Gentile who has converted to Judaism) but would not have been allowed full privileges at the temple because he was a eunuch (Deuteronomy 23:1).  It is interesting that he chose to read from Isaiah.  As a eunuch he must have been drawn to Isaiah’s writing because Isaiah talks about God’s acceptance of those, including eunuchs, who worship him (Isaiah 56:3-5).

The Ethiopian was on his way home from Jerusalem.  His chosen reading to pass the hours away was from the prophet Isaiah and he must have wondered about the servant lamb Isaiah was referring to.  When Philip ran up beside the chariot the eunuch was reading Isaiah 53:7-8 and he was confused by what he was reading.

Philip went on to explain the good news of Jesus Christ.  His words aren’t recorded but he probably explained the whole context of Isaiah and connected the suffering and sacrificial lamb in Isaiah dying on behalf of the people in order to rescue them to the suffering and sacrificial death of Jesus who died on behalf of the people to rescue them.  See John 1:29-31 and Hebrews 9:24-28.

Part of the good news that Philip shared must have included discussion about being baptised into King Jesus to become members of the forgiven people of God.  It was the Ethiopian eunuch who requested to be baptised.  See Acts 2:22-39 and Romans 6:3-10.

As soon as they came up out of the water the Spirit took Philip away until Philip “finds himself” in the town of Azotus.  He continues preaching in the area and finally settles in the town of Caesarea (88.5 kilometres/55 miles north-west of Jerusalem).  We next read about Philip 20 years later when Paul stops in Caesarea on his way to Jerusalem (Acts 21:8-9).  He is then referred to as “Philip the Evangelist” who had “four unmarried daughters who prophesied.”

Understanding the Bible:
Children can relate to the man from Ethiopia because they often hear preaching or read Scripture that they do not understand.  Just as the Spirit sent Philip to help the Ethiopian understand, God provides a family of faith to surround children and help them learn what they need for a growing and maturing faith.  Think of the people in your congregation who provide this for children.  This can be elders, preachers, teachers and other Christians.  The children might also have other people like relatives who help them understand what the Scripture says.  And you are that person to the children in your class.

Before class use a sheet of paper to write the words from Isaiah that the Eunuch was reading: “He was led like a sheep to the slaughter, and as a lamb before the shearer is silent, so he did not open his mouth. In his humiliation he was deprived of justice. Who can speak of his descendants? For his life was taken from the earth.” (Acts 8:32b-33) Roll the paper up to form a scroll. When the children arrive open the scroll and have one of the children read it. Ask them what this verse means and then discuss the fact that sometimes the word of God can be difficult to understand. Elders, preachers, bible class teachers, and others who study their bibles can often help us to understand what we read. In today’s story we are going to read about a man who read the very same verses that we just read. Someone helped him to understand.
top

To persecute someone is to cause harm to them on purpose so that they suffer.  A man named Saul was one of the Jewish leaders who persecuted followers of Jesus.  He even went from house to house and dragged off men and women and put them in prison.  Soon many followers of Jesus began to leave Jerusalem and move to other places.

It was sad that they had to leave Jerusalem but the good thing was that wherever the followers of Jesus went they preached about King Jesus.  Because of that many more people heard the good news.  One of these followers of Jesus  was named Philip.  He was a man who was wise and lived according to the Holy Spirit.  Philip travelled to Samaria and told the people there about Jesus.

After this an angel of God came to Philip and gave him special instructions to go to the road that goes down from Jerusalem to Gaza.  Philip knew that angels were servants of God that sometimes delivered messages from him.  So he did just as the angel directed.  When he arrived at the road Philip looked up and saw an important looking man in a chariot.

The man was from the Ethiopia.  At that time this country was very rich and powerful.  The man was an important official in charge of all of the Queen’s treasures.  He was on his way back home after going to Jerusalem to worship.  The man was reading from a scroll of the prophet Isaiah.  He was reading about a suffering lamb that was sacrificed on behalf of others but he did not know what that meant.

The Holy Spirit of God told Philip to go up to the chariot so Philip ran up to it.  Philip asked the Ethiopian, “Do you understand what you are reading?”

Sometimes it is difficult to understand what we are reading in the word of God.  Sometimes we need help from people who understand the Bible better than we do.  The man had many questions and asked Philip to help him understand.

The Ethiopian showed Philip the Scripture he was reading and Philip began to explain it to him.

Then Philip went on to tell him more and more about Jesus Christ so that the man could understand that Jesus was the Lamb of God.  The man must have thought, “Oh, I see, now I understand what Isaiah was talking about.”  The Ethiopian was so happy to hear the Good News of Jesus.

The Ethiopian was so excited.  He wanted to have his sins forgiven so that he could be a follower of Jesus and be part of the people of God.  When the chariot passed near some water the Ethiopian said, “Look, here is water.  Why shouldn’t I be baptised?”

The Ethiopian ordered the chariot to stop and both he and Philip went down into to the water so Philip could baptise him.  As soon as they came up out of the water the Holy Spirit took Philip away.  He later appeared in another town and went on teaching many other people about Jesus.

Even though the Ethiopian man never saw Philip again the Bible says that he “went on his way rejoicing.”  He was now a follower of Jesus and part of the people of God.  His life would never be the same.

Philip helped this man understand the Scriptures.  When you have questions about what you are reading in the Bible who can help you understand?
top 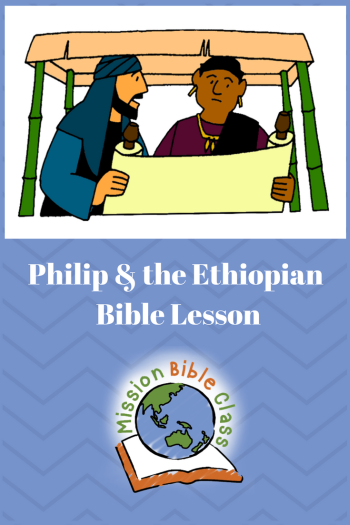