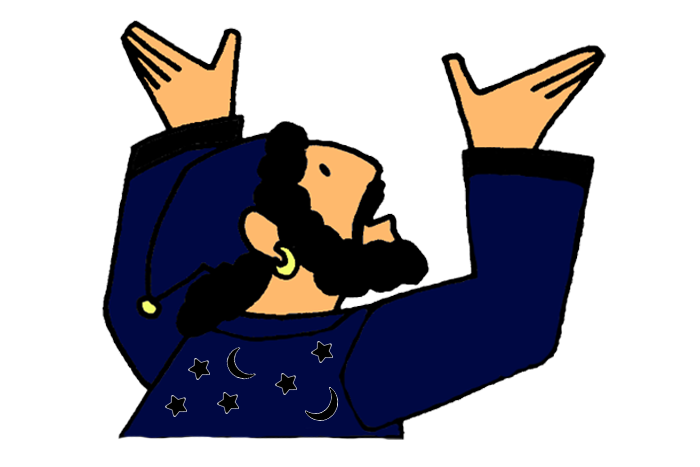 Suggested Emphasis: Magic tricks are just “tricks” but miracles are by the power of God.

Philip was another servant (deacon) who preached about God. When he preached in Samaria, a well-known sorcerer (or magician) named Simon believed and became a Christian. Simon  had only ever done clever magic tricks so he was amazed when he saw real miracles performed. When the apostles came to Samaria Simon noticed that they laid hands on people to give them the power to do miracles. Simon wanted to have that power. He offered to pay lots of money if the apostles would sell him the same power they had. One of the apostles, Peter, told Simon that no one can buy the power of God. God gives the power.

The Christians are Persecuted and Scatter (Acts 8:1-3)
At the conclusion of the story of the Stoning of Stephen we are first introduced to a man named Saul.  When the angry Jews were stoning Stephen Saul showed his approval by taking care of the cloaks of those who were throwing the stones.  After that event Saul seems to go on a rampage against the followers of Jesus in an attempt to destroy the church.  He even went from house to house dragging off men and women and putting them in prison.  When a person or group is made to suffer this is called “persecution“.

Because of the great persecution, followers of Jesus left Jerusalem in great numbers and went to live in other regions.  As they went they shared the good news of Jesus Christ.  So, ironically, by trying to destroy this Jesus movement, Saul actually played a part in making it spread and grow.  You can learn more about how Saul’s life changed drastically in the story Paul (Saul) Becomes a Christian.

Philip preaches in Samaria (Acts 8:4-8)
One of the Jesus-followers who left Jerusalem and shared the gospel with other people was Philip.  Philip was known to be a faithful man and had been one of the seven men full of the Spirit and wisdom chosen to be one of The First Deacons for the church.  Later in Acts 8 we learn more about Philip in the story Philip and the Ethiopian.  Later, in Acts 21:8-9, we read about Philip living in Caesarea and being the father of four unmarried daughters that prophesied.

He taught the people in Samaria about Jesus and performed many miracles.  The Samaritans were very impressed and received the news with joy.  Up to this time only Jews had obeyed the Gospel.  Samaritans had Jewish ancestry and had much in common with the practicing Jews but were regarded by Jews as inferior and unclean.  They were looked down on by the Jews and also despised by non-Jews.  Samaritans were a mixed race of people with some ancestral ties to the northern kingdom in the Old Testament.  They practiced the Jewish religion but had their own version of the Pentateuch and had their own temple in Gerizim until it was destroyed by the Jews in the 2nd century B.C.  This was the place referred to by the Woman at the Well (John 4:20).

Simon the Sorcerer Believes (Acts 8:9-11)
Simon was famous in Samaria and was said to have divine power or what the people called “the Great Power”.  Simon was not afraid to boast about his greatness and had a wide following.  Even though Simon had been impressing people with his magic tricks he recognised that the power of the Holy Spirit as seen in the miracles Philip performed was different from what he had been doing.  Magic tricks can be learned and explained but a miracle is an event that is not explained by natural laws or science.  Simon joined many of the Samaritans in believing what Philip was preaching and became a follower of King Jesus by being baptised.  Simon was so impressed that he continued to follow Philip around and watch him perform even more miracles.

The Apostles Visit Samaria and Share the Power of the Spirit (Acts 8:12-17)
The apostles were still living in Jerusalem.  Two of the Apostles, Peter and John, travelled to Samaria when they heard how not only Jews but now even Samaritans were becoming followers of Jesus.  Before Jesus ascended back to the Father he had told the apostles to “teach the nations” (read about this in The Great Commission) and that they would be his witnesses in Jerusalem, Judea and Samaria.  Peter himself, when preaching the Sermon at Pentecost, said that the promise of the Holy Spirit was for “all who are far off- for all whom the Lord will call.”  This is recorded in Acts 2:38-39.  The powerful story of King Jesus was spreading from Jerusalem outward.

According to the promise, the Holy Spirit had come to live inside each of these Samaritans when they believed and were baptised.  But upon the arrival of Peter and John the Samaritans witnessed the same kind of great outpouring of the Holy Spirit that had been seen before and after Peter had preached the famous Sermon at Pentecost in Jerusalem.  When Peter and John placed their hands on them these new Christians received the special ability to perform miracles themselves.  Before, the Spirit had not “come upon” them but now the Spirit most certainly had!  This manifestation of the Spirit demonstrated that God accepted the Samaritans, too, to be part of his one people.

The Gospel is for everyone.  In the Book of Acts we read of other examples of the outpouring of the Holy Spirit in a special way to show that God was breaking a barrier and accepting a new group of people.  This happened with:

Simon Wants Powers for Himself but the Apostles Refuse (Acts 8:18-25)
We may never know if Simon’s earlier conversion was genuine or not.  Some might say he genuinely became a follower of Jesus but then later gave into temptation.  Or one could argue that his baptism was for show only.  Whatever the case, Simon revealed his mercenary intentions when he asked Peter and John to sell him their power to pass on the ability to perform miracles.  It would be common for magicians to exchange secrets for money so perhaps he thought he could be taught how to do this trick.

Peter was extremely angry with Simon’s request and quite clearly pointed out that Simon’s heart was bitter and captive to sin.  Peter said to Simon, “you have no part or share in this ministry, because your heart is not right before God.”  He told him to “repent of this wickedness and pray to the Lord.  Perhaps he will forgive you for having such a thought in your head.”

Simon immediately begged Peter to pray for him.  The Scripture ends with Peter and John returning to Jerusalem.  We will never know what their reaction to Simon’s requests was and whether or not they prayed for him.

Simon’s livelihood and reputation depended on his ability to perform magic tricks for people.  In sharp contrast, the Holy Spirit is a living and active part of God himself.  Miracles performed by the Spirit are beyond any human ability.

Perform an obvious magic trick. You can perform a card trick or borrow magic books from the city library. After you have performed it a few times and then allow the children see how it is done. “Children, in today’s bible story we are going to learn about a man who could do lots of magic tricks. He learned a very important lesson about the difference between tricks and the real power of God.”
(More about this in the post Miracles versus Magic Tricks.)
top

To persecute someone is to cause harm to them on purpose so that they suffer.  A man named Saul was one of the Jewish leaders who persecuted followers of Jesus.  He even went from house to house and dragged off men and women and put them in prison.  Soon many followers of Jesus began to leave Jerusalem and move to other places.

Wherever the followers of Jesus went they preached about Jesus.  One of these Jesus followers was Philip.  He was a man who was wise and lived according to the Holy Spirit.  Because he had been with the Apostles he could perform miracles to prove that the word of God about Jesus was true.  Philip travelled to Samaria and told the people there about Jesus.

Simon was a famous magician that lived in Samaria.  Simon performed magic tricks and everyone thought he was amazing.  They even said that he had power like a god.

But when Philip told the Samaritans the good news of Jesus Christ many people believed.  When the people saw the miracles Philip performed by the power of the Holy Spirit the people knew that miracles from God were much better than just magic tricks that people can do.  A magic trick can be explained and done by anyone.  But a miracle cannot be explained by science and can only be done through the power of God.

Many people accepted the teaching of Jesus and decided to be baptised.

Even Simon the Sorcerer was baptised.  After that Simon followed Philip everywhere and watched him perform miracles.

The good news about the Samaritans spread all the way to the Apostles in Jerusalem. Since many people did not like the Samaritans it was a very good thing that the Apostles could finally understand that God wanted everyone- Jews AND Samaritans to be part of the one family of God.

This was such a special occasion that God caused the Holy Spirit to come upon the Christians in a special way when Peter and John put their hands on them. Everyone there was amazed at the power of God and the Holy Spirit. This presence of the Spirit showed that God accepted the Samaritans as part of this one family.

Peter was not happy with Simon.  The Apostles had been given this power by Jesus.  How dare Simon think anyone could buy what was only God’s to give.  No one can buy the gift of God with money! Peter told Simon that he must repent and ask God for forgiveness.  Simon asked Peter and John to pray for him.

Peter and John continued to preach to the people about God until it was time for them to return to Jerusalem.  They even talked to people about Jesus while they were travelling home.  It had been a sad time when the disciples had to leave Jerusalem but now, because of that, many new people had heard about Jesus and become disciples.
top

Click here to download the slideshow or click here to download the pictures to print.
Each teacher is unique so only use the illustrations that best relate to the way YOU are telling the story in THIS lesson. Too many illustrations can be confusing so eliminate any that cover other stories or details you do not wish to emphasise in this lesson.
top 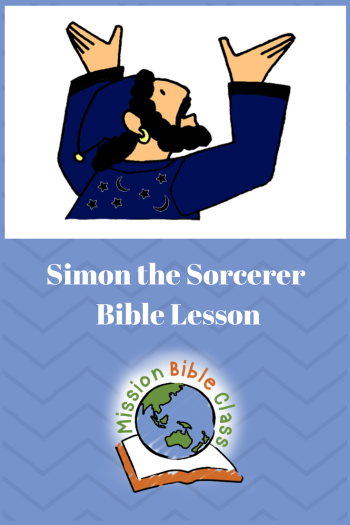