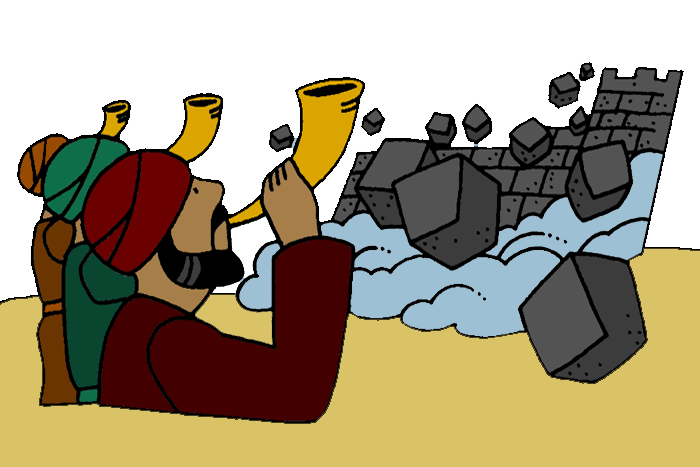 Suggested Emphasis:We should obey God even if we don’t understand.

A “man with a drawn sword” appeared to Joshua and gave him special (and very unusual) instructions on how to conquer Jericho. The priests were to carry the ark of the covenant with them as they marched around the city walls of Jericho. Soldiers marched in front of the priests and behind them. The priests blew trumpets and marched around the city once each day for six days. On the seventh day they marched around the city seven times. After the seventh time, when the priests blew the trumpets, the people shouted. Before their eyes the city walls collapsed and the soldiers overcame the city. Only Rahab and her family were allowed to live (because she had helped the spies). Joshua told the Israelites that they were to devote everything they found to the Lord. They were not to keep it for themselves.

The Israelites had entered the Promised Land but it was not theirs yet. Their first battle for the land was against the gateway city of Jericho. The people of Jericho had heard all about the Israelites so they “tightly shut up” their city (Joshua 6:1). There were five usual ways to capture a walled city: by going over the walls using ladders or ramps, by digging a tunnel under the wall, by smashing a hole through the wall, by laying siege until the city is starved into submission, or by some sort of trick to get the people to open the gates (like the legendary wooden horse used by the Greeks on Troy).

The “commander of the Lord’s army” who appeared to Joshua (5:15) solved all of the questions of attack. Joshua only had to follow instructions (5:13-15). The commander could have been God himself because Joshua worshiped him as God and was told that the ground was holy, as Moses had been told at the burning bush. The drawn sword certainly indicates God’s intended participation in the battle. The message for Joshua was a statement of fact, as if the battle were already over.

The plan was unlike anything that an army would normally use. Anyone without faith in the Lord would have thought the plan was ridiculous. Priests were to carry the ark of the covenant, and seven priests, bearing seven trumpets of ram’s horns, were to go before the ark, blowing the trumpets continually. They were to circle the city once each day for six days. On the seventh day, the men were to march around the city seven times. After the seventh circuit, the priests were to make one long blast on the trumpets. At the trumpet sound, the people were to shout loudly.

The priests were probably using “shofars”. A shofar is a horn made from the curved horn of a ram. The horn had to be hollowed out and polished before a sound could be made on it. A shofar does not work like a trumpet; you can’t play a tune on it. Instead, the shofar was used to send signals, to announce special occasions, to call soldiers to battle, and to sound an alarm.

The people did as instructed. As soon as they heard the trumpets, they shouted, and the wall fell down flat. The people charged into Jericho and captured it. Joshua instructed them to devote everything in the city to the Lord (6:17-19). They were not to keep anything for themselves. This point can be stressed because it will come up in a later lesson when it is found that one man took some items for himself and hid them (Joshua 7-8:1).

Because Rahab had previously protected Israelite spies (2:8-14), she and those in her household were spared. The Israelites knew which house was hers because she had placed a red cord in her window (following the instructions that the spies had given her). But every other living thing died when Jericho fell (6:21).

Sometimes children (and we adults) do not understand why the Lord requires certain things of us. Joshua must have been puzzled by the commands in this story. We can be assured that the Lord knows what He is doing. If we can only trust Him more!

Bring lollies or treats to class today. “I have a lolly  (candy) for everyone who will make a silly face.” (Or something similar). After giving out the lollies to all of the children then ask them why they did such a silly thing. “You probably did such a silly thing because you knew you would get the lolly. You really wanted that lolly. Sometimes we think that our parents ask us to do things that are silly (let them name some— cleaning their room, using manners, etc). Even though we don’t always understand why they ask us to do things, we do them because we want to obey them. We want them to be happy with us. Sometimes God commands people to do things that they do not understand. Why would someone obey God? (Let them answer). We want to make God happy too. We know that He has a good reason when He asks us to do something. God commanded Joshua to do something. Others thought it was silly but Joshua did it anyway.”
top

The Israelites were now in the land that the Lord had promised to them. Joshua was happy that they were in the land but he knew that his job was not over. It was just beginning. The people in the new land did not believe in God. They did not want God’s people to live there. Joshua knew he must fight the people before the Israelites could live there. The first big city was Jericho. There were tall walls around the whole city. The walls were strong and the only way to get into the city was through the city gates. The people in Jericho would never open the gates to the Israelites!

As Joshua was thinking about how he would conquer the city of Jericho, he noticed a man standing nearby. The man had a sword drawn as if he was ready to fight.

“Or you on our side or on our enemies’ side?” Joshua asked.

“I am not for the enemy or for you. I am on the Lord’s side!” The man told Joshua to take off his shoes because he was on holy ground. Joshua knew that this was not just a man. This was the voice of the Lord! The Lord gave Joshua special instructions on how to win the battle of Jericho. The instructions were very unusual but Joshua listened and then he left and did exactly as the Lord commanded.

So everyone lined up. First the army, then the seven priests blowing trumpets, then the priests who carried the ark of the covenant, then the people and a guard of fighting men. All of them marched one time around the city of Jericho. The army and the people did not make any sound.

The people inside the city of Jericho must have laughed at the Israelites! They probably thought the Israelites were crazy. Why were they marching around the city? They would never win any battles that way. Even though it seemed an odd thing, Joshua and the people did exactly what the Lord commanded. They marched around the city one time, every day, for six days.

On the seventh day, the Lord commanded the Israelites to march around the city seven times, not just once. The people knew that after the seventh time, when they heard the trumpets, they were supposed to shout as loud as they could. That is exactly what they did. When the priests blew the trumpets, the people shouted at the top of their voices. Guess what happened? All of the strong walls of Jericho broke into small pieces and fell down flat!

The people must have been very excited. Now they could enter Jericho and win the battle! There were many rich things in Jericho. There were gold and silver and other riches. Joshua told the Israelites not to keep anything for themselves. Any riches that were found would belong to the Lord. They put it into the treasury in the tabernacle of the Lord.

Joshua remembered that the woman, Rahab, had protected the spies when they had come to Jericho. She had put a red cord in her window just as the spies had told her. When the Israelites saw the cord, they let Rahab and her family leave the city safely. They were the only people to escape Jericho alive.
top 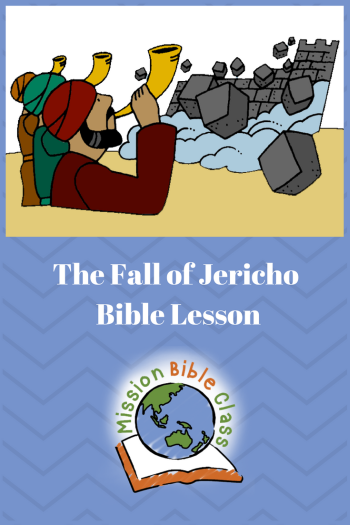