Moses Does Not Honour God 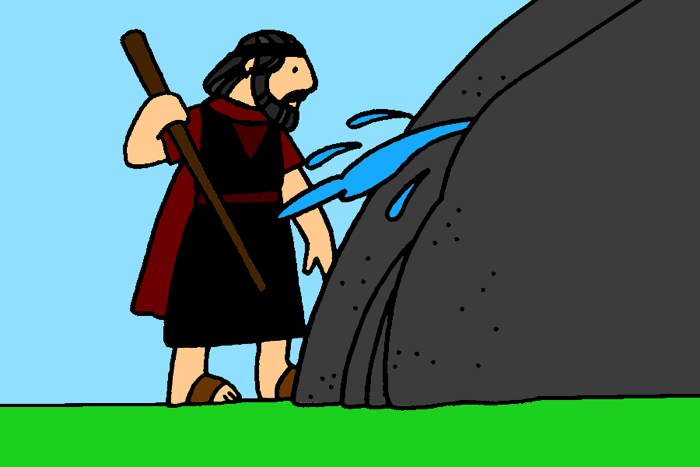 Suggested Emphasis: We are giving God honour when we obey Him.

Forty years had passed since the Israelites left Egypt to go to the land that the Lord had promised them. After camping in an area called Kadesh, they ran out of water. When the people complained to Moses and Aaron, the Lord commanded Moses to speak to a rock so that water would miraculously gush from it. Instead of obeying the Lord, Moses chose to angrily speak to the people and then strike the rock twice with his staff. The rock produced water but Moses paid a high price for refusing to honour the Lord. He would not live to enter the promised land.

We find the Israelites in the same geographical area where they rebelled against the Lord (Numbers 13-14). Almost forty years had passed since the twelve spies had been sent into Canaan. Only two of the spies (Joshua and Caleb) had believed that the land could be conquered. The other ten convinced the people that the land was filled with giants and that it could not be taken. Although they were at the entrance to the Promised Land, the Lord did not allow them to enter because of their lack of faith in Him. Instead, they were made to wander in the desert (wilderness) for forty years. The Lord continued to care for the people but He told them that none of the adults older than twenty years of age would see the Promised Land. Only Joshua and Caleb (the two faithful spies) were exempt from this. Not much is recorded about the forty years in the wilderness. The Israelites could have spent the time moving from place to place or they might have kept a type of “base camp” at Kadesh.

The forty years are drawing to a close and a new generation has risen up. Moses’ and Aaron’s sister, Miriam, had just died. As they gathered at Kadesh the people were tired, hungry, and thirsty. There really was no water (Numbers 20:2). Perhaps Moses and Aaron should have taken more responsibility in leadership and already approached the Lord about the problem. The people complained to Moses and his brother, Aaron. Although these Israelites are a new generation, they know the complaint as well as their parents did: “It would have been better not to have left Egypt. Being dead would be better than this!”

Moses and Aaron rightly went to the Lord for help. Years ago when the people had faced a problem of a lack of water, the Lord had instructed Moses to strike a rock with his staff so that water would gush out (Exodus 17:1-7). This time Moses was given different instructions. He was told to take his staff and gather the people together. Then Moses was supposed to speak to the rock so water would miraculously gush out of it. Perhaps the staff would be a reminder of the way the miracle had previously been done. By simply speaking to the rock Moses would show that the power was not in the staff but in the Lord Himself.

Whatever the case, Moses chose to do this his own way and not follow the instructions of the Lord. He and Aaron took the staff and gathered the people together but then Moses delivered an angry lecture to them. Instead of giving the glory to God, Moses expresses his disgust and asked, “must WE bring you water out of this rock?” Seeming to get carried away in his anger, Moses then proceeded to lift his arm and strike the rock. Still angry, he struck it a second time.

The people needed water and the Lord caused the rock to gush forth with it despite Moses’ failure. Even so, Moses had sinned and the Lord rebuked and punished him. Moses was a great leader and a man of faith but he still had to bear the consequences of his actions. He would not be allowed to lead the people into the Promised Land.

It is interesting that Aaron received the same consequence even though he did not seem to take the lead in the incident. Aaron had originally been appointed to help Moses. Perhaps this was one of those times when he really should have been the one to speak. It seems that the Lord held Aaron equally responsible even though he was not the “voice.” We should remember that when someone begins to lead a group down a false path. Will we speak up and make a difference?

Why do we obey the Lord? Is it for a reward or sometimes out of fear? Perhaps we obey out of duty or loyalty. The Lord punished Moses and Aaron because they did not obey. He says that they did not trust the Lord enough to honour Him as holy (Numbers 20:12). Our obedience is a way of trusting and showing honour to the Lord. Our obedience does not earn anything for us but is our way of saying that yes, we believe the Lord to be holy.

“Does anyone remember what the fifth commandment is? Let’s look it up in our bibles. We can find it in Exodus 20:12.” The teacher can read this to younger children or have older children read the verse aloud. “What does it mean to honour your father and mother (let the children answer)? To honour our father and mother means to respect and obey them and to treat them like they are very good. Did you know that we should honour God? (Older children might look up and read 1 Timothy 1:17) How can we honour God? (Let the children answer) We can show honour to God by obeying Him and treating Him like He is good and holy—because He is! In today’s story we are going to find out about a time that Moses learned a lesson about honouring God.”
*For younger children, consider showing pictures from magazines depicting children honouring their parents and God.
top

After leaving their time of slavery in Egypt the Israelites had been wandering in the wilderness for many years.  Moses had led them to the edge of a new land to call their own but many of the people rebelled against God before they could claim it.  They did not honour God.

As punishment God told them that they would have to wander in the desert for forty years before they could come back and claim the land.

The time would  come for them to enter the promised land but for now they were spending their time travelling and living in tents.  Even though the people had to wander in the desert, the Lord always took care of them.

Sadly, even now, the people sometimes failed to honour the Lord.  They thought he would not take care of them. They sometimes complained to Moses when they did not have enough to eat or drink.

One day they complained to Moses and Aaron that they were very thirsty.  The people said, “It would have been better if we would have stayed in Egypt! We are just going to die out here in the desert!”

Moses and Aaron went to the entrance of the special tent, the tabernacle, and prayed to the Lord. They asked Him to help the people. The Lord gave them special instructions. He told Moses to take the staff from the tabernacle and then go and gather the people together. After he gathered the people together, Moses was to speak to a rock. The Lord promised that water would gush out of the rock so the people would have plenty to drink. Years before, the Lord had told Moses to hit a rock to make water come out. This time the Lord gave Moses new instructions.

Moses and Aaron took the staff and then gathered all of the people together. Moses knew that the Lord had told him to speak to the rock but Moses began to speak to the people instead. The more he began to talk, the angrier he became. Moses was not giving honour to God. Giving honour to God means respecting and obeying Him and showing that He is holy and good. Moses was not doing that. In fact, Moses became so angry that he hit the rock with the staff. Then, he did it again.

Water began to pour out of the rock like the Lord had promised, but the Lord was not pleased with Moses. He said to Moses and Aaron, “Because you did not trust Me and give honour to Me, you will not enter the Promised Land with my people.”

Moses and Aaron were very sad but they knew that they should have given honour to the Lord and obeyed Him.
top 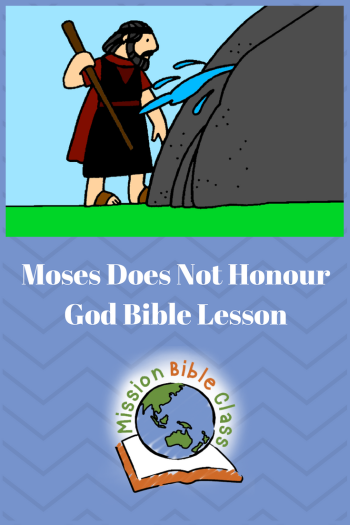