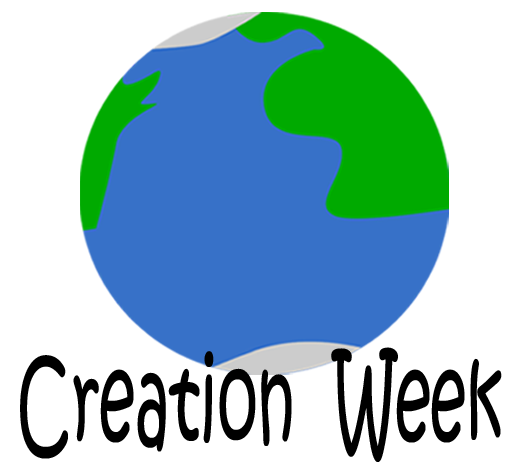 Suggested Emphasis or Theme: There was nothing until God began his work of creation.

Memory Verse: “In the beginning God created the sky and the earth.”  (Genesis 1:1. ICB)

Special Note to Teachers: The creation story has been supplied on this website in two ways depending on your situation.

Everyone close your eyes tightly and put your hands over your eyes.  Now, what do you see?  Nothing.  Even though you see nothing when your eyes are closed you can still hear, smell and feel things.  But in today’s story we are going to learn about a time when there was absolutely nothing.  And I mean NOTHING!

Did you know that a long, long time ago there was nothing? No trees, no people, no buildings, not even sound or smell? Darkness was everywhere.  That is what it was like before God decided to make our world. God created our whole world in six days. He made something different on each of the six days and then on the seventh day God was finished and rested.  But, first, let’s go back to the very beginning!

Let’s look at the very first verse in our Bibles.  “In the beginning God created the sky and the earth. The earth was empty and had no form. Darkness covered the ocean, and God’s Spirit was moving over the water.” Genesis 1:1-2 (ICB)

(Day 1)
Bible Verses: “Then God said, ‘Let there be light!’ And there was light. God saw that the light was good. So he divided the light from the darkness. God named the light ‘day’ and the darkness “night.” Evening passed, and morning came. This was the first day.” Genesis 1:3-5 (ICB)

So God simply spoke and light appeared. And this was not just sunlight. After all, the sun had not even been created yet. Can you make light just by saying, “Let there be light”? No, but God can.

Water was everywhere. On the second day of creation God separated the water above the earth from the water on the earth, placing the sky between the two. For the first time ever, the earth would have experienced an atmosphere and things like clouds, wind, waves and evaporation.

(Day 3)
Bible Verses: “Then God said, ‘Let the water under the sky be gathered together so the dry land will appear.’ And it happened. God named the dry land “earth.” He named the water that was gathered together “seas.” God saw that this was good.  Then God said, ‘Let the earth produce plants. Some plants will make grain for seeds. Others will make fruit with seeds in it. Every seed will produce more of its own kind of plant.’ And it happened. The earth produced plants. Some plants had grain for seeds. The trees made fruit with seeds in it. Each seed grew its own kind of plant. God saw that all this was good. Evening passed, and morning came. This was the third day.” Genesis 1:9-13 (ICB)

(Day 4)
Bible Verses: “So God made the two large lights. He made the brighter light to rule the day. He made the smaller light to rule the night. He also made the stars. God put all these in the sky to shine on the earth. They are to rule over the day and over the night. He put them there to separate the light from the darkness. God saw that all these things were good. Evening passed, and morning came. This was the fourth day.” Genesis 1:16-19 (ICB)

With the sun came light, heat and warmth, UV rays, sunrises, sunsets, dawn, dusk and even eclipses. God knew that the earth would need the sun to survive.

And then there was the beauty of the night sky for the first time. Sometimes the moon is full and round and sometimes it is shaped like a crescent. When the moon appears very thin some people even call it a “toe-nail moon”. Of course the stars are amazing because they are bright and sparkly and even appear to twinkle in the sky.

(Day 5)
Bible Verses: “Then God said, ‘Let the water be filled with living things. And let birds fly in the air above the earth.’  So God created the large sea animals. He created every living thing that moves in the sea. The sea is filled with these living things. Each one produces more of its own kind. God also made every bird that flies. And each bird produces more of its own kind. God saw that this was good. God blessed them and said, ‘Have many young ones and grow in number. Fill the water of the seas, and let the birds grow in number on the earth.’ Evening passed, and morning came. This was the fifth day.” Genesis 1:20-23 (ICB)

In the sea there are fish, swimming mammals such as whales and dolphins as well as sponges, jellyfish, clams, oysters, sea urchins, sea cucumbers, starfish, sea lilies, lobsters, worms, snails, and many more.  And on this day God created all sorts of birds to fill the skies. When God created birds he created feathers, beaks, wings and claws.

Think of all of the animals that live on the ground (wild animals and tame animals): amphibians, reptiles, mammals and even some birds that do not fly. God is amazing because every single kind of animal was his idea and his creation.

Then the Lord God took dust from the ground and formed man from it. The Lord breathed the breath of life into the man’s nose. And the man became a living person. Genesis 2:7 (ICB)

On the same day God made the animals he made a man. The man was called “Adam”. Adam was different from the animals because, when God breathed life into Adam, God made him to be a living person. As a living person, Adam had the ability to think, love and worship. Adam could make choices. Adam could talk to God. Adam was a special creation. Adam represented God to creation. God brought all of the animals before Adam and gave him the honour of naming them. But Adam knew that he was different from the animals. God did not want Adam to be lonely.

Bible Verses: So the Lord God caused the man to sleep very deeply. While the man was asleep, God took one of the ribs from the man’s body. Then God closed the man’s skin at the place where he took the rib. The Lord God used the rib from the man to make a woman. Then the Lord brought the woman to the man. Genesis 2:21-22 (ICB)

Adam was so happy when he woke up and saw the woman. Now he was not alone. He called the woman “Eve”. The creation of mankind was now complete. Adam and Eve were beautiful and pure. They experienced no shame or need to cover up with clothes.

God was not resting because he was tired. God rested because he was finished with some very important work! He was satisfied that he had done a very good job.  And God had told Adam and Eve that they also had a job to do. They were to take care of the garden.
How about you? How do you take care of the beautiful earth that God made?

Two versions of the same slide show and visual aid are provided below. 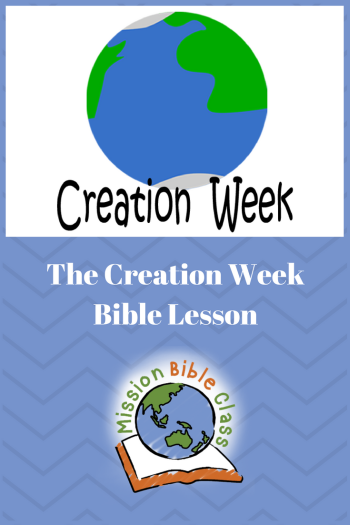