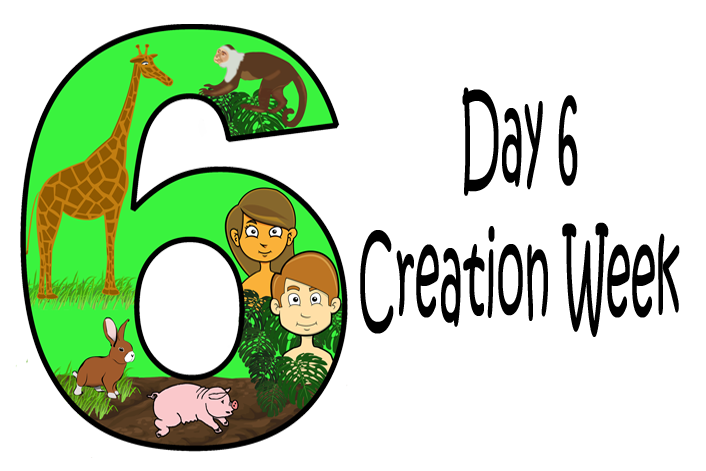 Suggested Emphasis or Theme: God made animals and people on the sixth day. Also emphasise that people are different than the animals in that we are made in God’s image (to have a relationship—or friendship—with Him).

Memory Verse: “I praise you because I am fearfully and wonderfully made, your works are wonderful, I know that full well.” Psalm 139:14. NIV

On the last day of creation God created animals and after this it was finally time for God to create man and woman. There was something special about this last creature of creation. God created man and woman in His “own image.” Unlike what we often hear from evolutionary teaching, people are not just “more evolved and more intelligent animals” but we are made to have a special relationship and partnership with God.
How to Teach This Lesson as Part of a Creation Unit or Theme

Now it was time for the animals that lived on the earth. God made the wild animals and farm animals. He also made the creatures that crawl on the ground. Amphibians, reptiles, mammals, and the birds which do not fly are all creatures of the ground.

God completed His creation by making humans in His own image. He blessed them and gave them a mandate to multiply and fill the earth.

Genesis 1 relates the story of creation.   Genesis 2:4-25 gives more details and specifically how Adam and Eve related to the rest of the creation.  God created Adam from the dust of the earth and breathed life into him.  Adam was given the responsibility to care for the garden but God did not mean for Adam to do this alone.  God brought all of animals before Adam and gave him the honour of naming them.  As he reviewed the animals Adam must have found it obvious that each of the animals had mates.  God caused Adam to fall into a deep sleep and removed one of his ribs.  From this rib God formed a woman.  The creation of mankind was now complete.  Adam and Eve were beautiful and pure.  They experienced no shame or need to cover up with clothes.

They were complete in this place because God provided for all of their needs. God placed two trees in the centre of the garden. Fruit from the tree of life apparently gave eternal life, as long as one could partake of it. The other tree, the tree of knowledge, was a forbidden tree.

What else does the Bible have to say about animals?

What else does the Bible have to say about people?

Give each child some play dough or clay and ask them to make the shape of their favourite animal. After they have done this then ask them to make the animal come alive. Discuss the fact that man can make shapes and sometimes even robots or other mechanical things that move but only God can make something have life. “Today we are going to find out about what God created on the sixth day of creation.”
top

Depending on the ages of the children you are teaching you may choose to let them read some of these Bible passages aloud- straight from the Bible.  If children are too young to read this then make a point to show that you are reading from the Bible.  These words are easy to understand and this is a good opportunity for children to hear them directly.

So God made the wild animals, the tame animals and all the small crawling animals to produce more of their own kind. God saw that this was good.”  Genesis 1:24-25 (ICB)

Now it was time for a special creation. When God was ready to make the first person, He said, “Let’s make man in Our image.” Something was going to be different about man. With everything else God made, He simply said, “Let there be ____,” and it happened. But God wanted to make man in a special way.

“Then the Lord God took dust from the ground and formed man from it. The Lord breathed the breath of life into the man’s nose. And the man became a living person.” Genesis 2:7 (ICB)

So God took some dust from the land He had made and lovingly and creatively used some of it to make a man, just like you might make something out of clay. Then God breathed into the man’s nostrils, and the man came alive. Do you know what God named the man? (Adam)

Adam was different from the animals because, when God breathed life into Adam, God gave him life. Adam could think, love and worship.  Adam could make choices.  Adam could talk to God.  Adam was a special creation.

What was Adam’s job?  The Lord God took the man and put him in the Garden of Eden to work it and take care of it.

God knew it was not good for man to be alone.  And God knew that Adam needed a helper. Let’s read from our Bible…

“So the Lord God caused the man to sleep very deeply. While the man was asleep, God took one of the ribs from the man’s body. Then God closed the man’s skin at the place where he took the rib. The Lord God used the rib from the man to make a woman. Then the Lord brought the woman to the man.”  Genesis 2:21-22 (ICB)

So God put Adam to sleep, took one rib from Adam’s side, and made a woman.

“God looked at everything he had made, and it was very good. Evening passed, and morning came. This was the sixth day.”  Genesis 1:31 (ICB)

Visual Aids that Cover All Seven Days of Creation

If teaching the story of the creation as a unit over a few weeks or days then repeat the whole creation story each time and follow this by going back and emphasising more details about a particular day.  Try using a variety of story telling and visual aid methods.  Although there will be a repetition of the creation story, you will be going a little deeper on this particular day, “Day 6”.  By the end of Day 7 all of the children will remember the story really well. 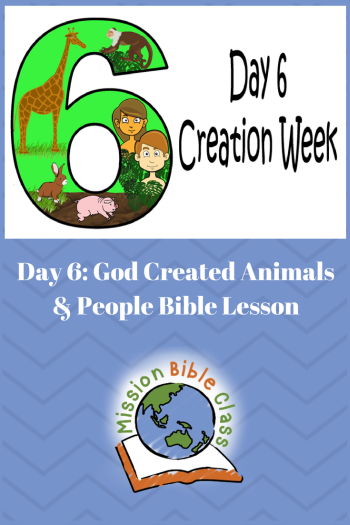