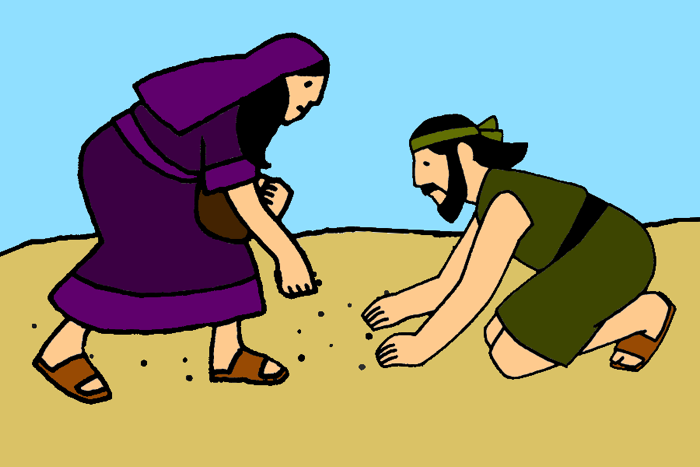 Suggested Emphasis:The Lord took care of His people in the wilderness and he will take care of us today.

Memory Verse: “And my God will meet all your needs according to the riches of his glory in Christ Jesus.”  Philippians 4:19, NIV

Within days of leaving bondage in Egypt and heading toward the land God had promised them the people began to grumble and pine for the comforts of their old life.  Despite their complaints the Lord provided for their needs over and over.  He caused bitter water to become sweet and even led them to an oasis to camp during the journey.  He fed them by providing meat via large flocks of quail that flew into their camp each evening and a miraculous dew in the mornings which turned into flakes of sweet bread (manna) for them to eat.  A larger portion of these were provided one day each week so that the people could rest and observe the Sabbath the next day.

After seeing the power of God displayed over the mighty Egyptian Army when the Israelites crossed the Red Sea it is difficult to understand how anyone could doubt God and his plans yet that is exactly what the people did.  The journey to the promised land involved hundreds of thousands of people crossing desert lands so it is no wonder that water and food quickly became an issue.

Wanting to make sure to get the most work out of their slaves the Egyptians would have provided for basic needs.  Now, after only three days and headed away from Egypt, the people were thirsty for water and the only water they found was bitter.  God provided Moses with a piece of wood (various Bible versions use the words “tree” or “log”) to place in the water and miraculously turn it from bitter to sweet.  Soon after this the people are led to Elim where water is plentiful.

(Exodus 16:1-3) Over a month into the journey and further into the desert the people stopped to camp in a place ominously named the “Dessert of Sin” where they consider their lack of food and once again grumble and pine for Egypt.

The pillars of cloud-by-day and fire-by-night (Exodus 13:21) seem to still be leading Moses and the people on this journey.  Now, at this point in time, the glory of the Lord became apparent to the people in a cloud over the desert (Exodus 16:10).

But more was to come from the sky.  God provided meat (quail that flew into camp each evening) and bread (manna: wafer-like flakes that landed on the dew each morning) for the people.  God laid out strict instructions for the amount to be gathered and anyone gathering more discovered that the extra would simply rot and fill with worms.

“So Moses and Aaron said to all the Israelites, ‘In the evening you will know that it was the Lord who brought you out of Egypt, and in the morning you will see the glory of the Lord, because he has heard your grumbling against him. Who are we, that you should grumble against us?’”

It was during this time that we first read about the Sabbath day of rest.  A double portion of manna was provided on the sixth day so that the people would be able to set the seventh aside as holy to the Lord.

Bring very thin wafers or crackers and honey to class. Have a snack before the story. “Do you like the taste of the honey and crackers? When the Israelites left Egypt they were very happy. After a while their food began to run out and they became hungry. Soon they began to wonder if maybe they would rather go back to Egypt. God sent them some special food.”
top

God’s people were on a journey to a land they would call their very own. God promised them that they would have their own land so this became known as “The Land of Promise” or the “Promised Land”.

For years the people had been slaves in Egypt but now they were free and on their way to a new home. A man named Moses was their leader and Moses’ brother, Aaron, was his helper.

To get to their new home the people had to walk many miles across a desert. After a few days of travel the people were very thirsty. The only water they found tasted so bitter that they could not even drink it.

The thirsty people began to complain. They remembered their life back in Egypt. They began remembering the good things about Egypt that they missed and forgot about the way Pharaoh treated them so badly.

When the people began complaining and wishing they could go back to Egypt Moses prayed to God about it. He asked God to help the people.

God answered Moses’ prayer. He gave Moses a piece of wood and told him to touch the bitter water with it. When Moses touched the wood to the water they water changed from bitter to sweet just as God said it would. Now there was plenty of water for everyone.

God continued to take care of his people on their journey. During the day God placed a pillar (or tower) of cloud in front of them so they would know the correct way to go Even though they were in a desert he led them to other places where there was plenty of water to drink.

After more than a month the people of God arrived in a place called the “Desert of Sin” and made camp. Soon all of the food was gone and the people began to doubt that God could take care of them.  They complained to Moses and his brother Aaron. Sadly, they even told Moses that their lives were better back in Egypt where they had been slaves. They said Egypt was better than the desert.

But God never forgot his people. God told Moses that food was about to rain down out of heaven. As Moses and the people looked out into the desert they saw a big cloud. They knew that the glory of God was in the cloud.

And God did just as he said. Every evening a great flock of quail (birds) would fly into the camp. The people would gather them and eat them.  And in the morning, when the people woke up, little white flakes (like wafers) covered the ground. The people called this manna.

Each day they gathered the manna and took it home to make bread.  But God told the people to only gather enough manna to feed their family. God wanted them to do exactly as he said and remember that he would take care of them.

But some of the people did not listen. They were greedy and gathered more than God had told them to. They thought they could save some for later. This seemed like a good idea at first but then they noticed that the extra manna began to rot and stink. Soon the manna was full of worms. These people realized that they should have listened to God.

There was another way God wanted the people to remember him. He told the people that the seventh day of the week would be a day of rest. They were to stop working on this day and make it special. This was a holy day set aside for God and it was to be called the Sabbath Day.

There would be no manna on the ground on the Sabbath day. Instead, God told the people to gather extra manna the day before the Sabbath and to prepare bread and save it to eat on the Sabbath. Unlike the other days the extra manna did not rot and fill with worms.

But once again some of the people did not listen to God. They did not gather extra manna on the day before the Sabbath Day. On the Sabbath they came to gather manna but there was none. They really wished they had obeyed God.

For many many years God would provide manna and quail for the people. If they obeyed God they did not have to be hungry.

To help them remember this in the years to come God told Moses to put some of the manna in a jar to keep and keep in their packs as they traveled on to the Promised Land. That manna did not go rotten. In fact, it stayed in the jar for many years.

Download the slideshow or download the pictures to print.
Each teacher is unique so only use the illustrations that best relate to the way YOU are telling the story in THIS lesson. Too many illustrations can be confusing so eliminate any that cover other stories or details you do not wish to emphasise in this lesson. 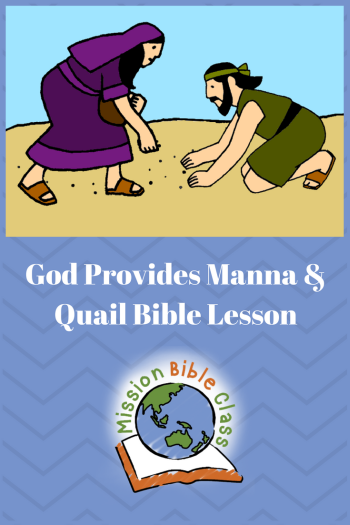