The Lord Speaks from a Burning Bush 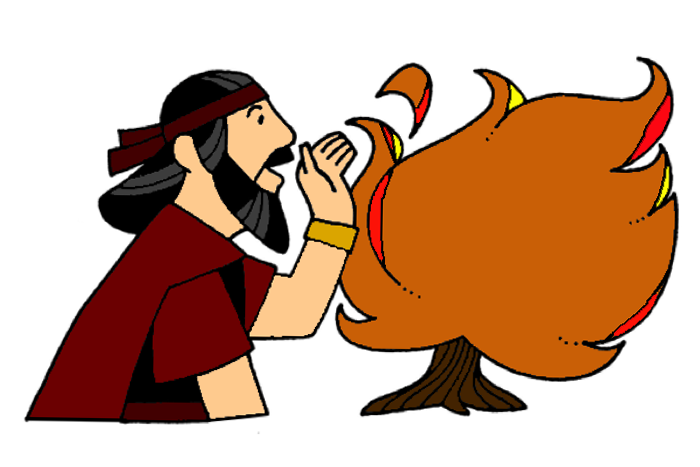 Suggested Emphasis: We should obey God without complaining.

Memory Verse: “Do everything without grumbling or arguing.” Philippians 2:14, NIV

Moses grew into adulthood in the Pharaoh’s palace but he always knew that he was a Hebrew (another name for Jews or descendants of Israel). After killing an Egyptian who was beating a Hebrew slave, Moses fled to Midian for his own safety. During the next forty years he married and helped take care of his father-in-law’s sheep. One day the Lord spoke to him from a miraculously burning bush. When the Lord told Moses that he had been chosen to lead his people out of Egypt, Moses offered up many excuses. The Lord gave Moses everything he needed to be a leader. He even told him that his brother, Aaron, would help him.

As in other events of this time we find that a number of different terms are used to describe God’s people.  Earlier, in Genesis 12:2, we learned that God chose Abraham to become the father of a great nation that would bless the all peoples of the earth.

Moses was adopted and raised in the palace of the Pharaoh by the Pharaoh’s daughter. Because his mother was allowed to nurse him during his younger years, Moses always knew that he was a Hebrew.  Even though he lived apart from them it is likely he would have known his parents and his brother and sister (Aaron and Miriam).

Day after day Moses would have seen his own people beaten and worked to death by the cruel Egyptians. When Moses saw an Egyptian overseer beating one of the Israelite slaves, he killed the overseer. When he realized that the incident had been witnessed he feared that he would be put in prison or worse, killed. Moses decided to escape and travel eastward across the desert to Midian, about two hundred miles from Egypt. During the next forty years Moses married a local woman (Zipporah) and shepherded for her father. He began raising a family.

The desert mentioned is west of Midian between the arms of the Red Sea. There Moses came to Mount Horeb (Mount Sinai).

While on Mount Horeb (Sinai), Mores saw a bush that was on fire, but it was not damaged. Moses wanted to get a closer look. Moses heard a voice, and it seemed to come right out of that fire! He did not know who was calling, but he answered bravely, “Here I am.” That meant he was ready to listen. The place was holy because God was speaking there. Moses had to be very respectful. He could go no closer. He took off his shoes because he was on holy ground. Removing his sandals was a sign of respect for a superior. Moses learned who was calling to him. God had spoken to Abraham, Isaac, and Jacob hundreds of years ago, but now the same God was talking to Moses himself! Moses hid his face because he knew no human being can face God and live.

God knew how the Israelites were being mistreated, overworked, and whipped in Egypt. He was ready to prepare Moses to lead them out of Egypt to a land of their own. Moses was to be God’s messenger. He was to tell the king of Egypt to let God’s people go, and he was to lead the people to another country.

Moses was a shepherd in the desert of another land. He had no power or influence in Egypt. He thought he could not gain freedom for his people. Moses could not rescue the people by himself, but with God’s help, he would shape the history of the Israelites. God promised that Moses would indeed bring the people out of Egypt. Moses would come back to worship at that same mountain where God was speaking to him. Then Moses would know that God had sent him and had helped him.

Moses had nearly been killed in Egypt. He was afraid to go back there, so he began to make excuses. The first excuse was that people would not believe God had sent him. In answer to that, God gave Moses three miracles to be used to convince the people that he really was God’s messenger. God’s pronouncement, “I am who I am,” was an explanation of His name, Yahweh. He was declaring Himself the God whose existence depended on nothing outside of Himself. He was declaring that no god of the Egyptians could possibly be compared to Him.

The second excuse was that Moses was not an effective speaker. But God had made his mouth, and God could make him talk more fluently.

God was angry because Moses did not trust Him as he ought, but the Lord agreed to let Moses’ brother Aaron go along and do most of the talking.

In the subsequent stories Let My People Go and The Death of the Firstborn we will learn that Moses did, indeed, obey God and return to Egypt to save his people.

Discuss jobs that parents and teachers ask us to do. What excuses do we offer to try to get out of them? Do we ever complain about work? “In today’s story, God asked Moses to do some work. Let’s find out what Moses did.”

Because Moses was adopted by the daughter of Pharaoh, he grew up in the palace where he received an education in all of Egyptian knowledge. Moses was brought up as a prince, and he could have lived in comfort all of his life. But Moses knew that he was actually a member of a Hebrew family. Being a Hebrew means that you are a Jew. You are a descendant of Abraham, Isaac, and Jacob. Remember that Jacob’s other name was “Israel?” If you were a Hebrew (Jew) then you were called a child (or grandchild, or great-grandchild . . .) of Israel. You were an Israelite.

Moses saw the Hebrew people unfairly treated. One day, when he had become a grown man, he was watching his people as they worked for one of the Egyptian taskmasters. Moses saw one of the Egyptians beating a Hebrew. Moses killed the Egyptian and buried him in the sand. But Moses had been seen! When the word was spread about the killing, Pharaoh heard it and planned to have Moses killed. Moses was afraid and realized he would have to run away.

Moses fled to the land of Midian, where he rested by a well. The seven daughters of the priest of Midian came to draw water from the well for their father’s flocks. Some shepherds drove the girls away from the well, but Moses came to the daughters’ rescue. He helped them water their flock. The girls told their father, Reuel, about the man who had helped them. Moses was invited to their home. He stayed, and eventually married Zipporah, one of Reuel’s daughters. For forty years Moses was a shepherd.

Back in Egypt, the people of God were crying out for help because of their slavery. God heard their cries, and He remembered His promise to Abraham, Isaac, and Jacob. They would be a great nation and would have their own land. God was planning to choose someone to lead His people to freedom!

One day as Moses watched his father-in-law’s sheep, he saw a bush on fire. The fire seemed to come up out of the middle of the bush, but the bush didn’t burn up! It just kept burning and burning. Moses went to the bush. As he went nearer to the bush, a voice called, “Moses! Moses!”

“Here I am,” said Moses, even more surprised.

“Do not come any closer,” the voice said. “Take off your shoes. This is holy ground. I am God.” Moses did what the Lord told him to do.

“I know all the trouble My people are having in Egypt,” God said. “I want you to ask the king to let My people leave Egypt and go to a new land I have for them.”

“But what will I tell the people? What if they want to know who You are?” Moses asked.

“Tell them that I sent you to lead them out of Egypt. Tell them ‘I am who I am’,” God answered.

When Moses was worried that the people would not believe the things he said, God answered, “See the staff in your hands? When you throw it down it will turn into a snake. When you pick it up by the tail it will turn back into a staff.” Then the Lord told Moses to put his hand into his cloak and pull it out again. Moses’ healthy hand had turned into a diseased hand with leprosy. When the Lord told him to put it back in his cloak the hand became well again.

“Moses, if they still don’t believe you then take some water out of the Nile River and pour it on the ground. The water will turn into blood. They will believe you then.”
Even though the Lord had answered all of Moses’ questions, Moses still had another excuse. “But I can’t talk well,” Moses said.

“Moses, who made your mouth? I did! I will help you talk,” said God.

The Lord was angry with Moses. Moses was only offering excuses to not do what the Lord said. “I will tell Aaron, your brother, to help too. I will tell you what to say. Aaron will help you say it.”

Moses didn’t understand all that God wanted him to do. He thought it was too hard for him, but God had promised to help him.

What do you think Moses did next?  Moses obeyed God and prepared to make the long trip back to Egypt. 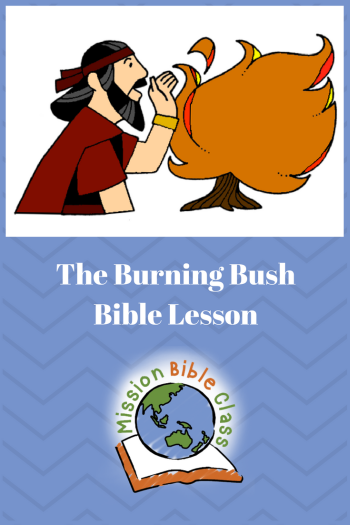