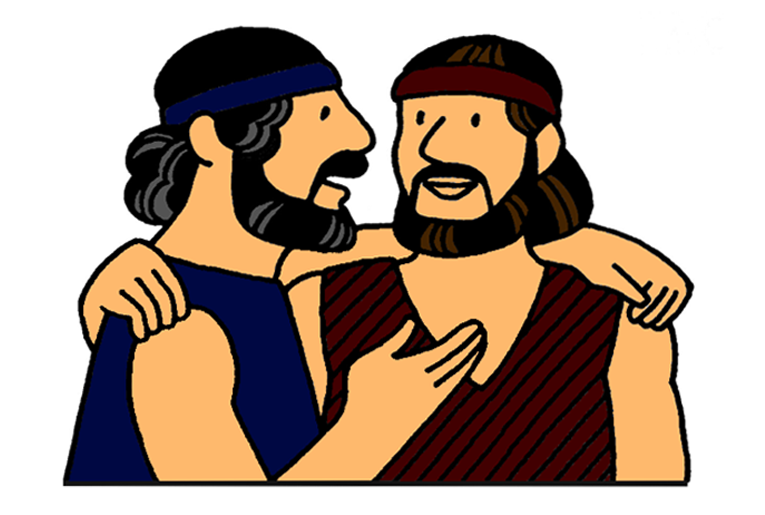 Suggested Emphasis or Theme: Make careful choices because they have consequences.

Abram and his nephew, Lot, both prospered while living in the land of Canaan. Their servants began to argue over whose flocks and herds should have the little amount of grass that was available.  To solve the problem Abram told Lot to choose an area for himself and that he (Abram) would take what was left.  Lot chose the more fertile land and moved near a place where very bad people lived.  Abram began living in a less fertile area but God blessed him and told him that all of that land would someday belong to his descendants.

In the years since God had called Abram to leave his home and begin living a nomadic life in the promised land of Canaan both Abram and his nephew, Lot, had accumulated wealth, possessions and a large amount of livestock.

Part of this prosperity was due to a sojourn in Egypt (Genesis 12:10-13:1).  The time in Egypt is a good reminder that Abram had great faith but was not a perfect man.  Abram lied to Pharaoh and allowed Sarai to be taken into Pharaoh’s harem for his own protection.  Despite Abram’s behavior God kept his promise and protected and blessed him.  Because of God’s blessings Abram and Lot’s wealth and entourage seem to have increased greatly by the time they returned here, to Canaan, after the famine.

This was not the first time Abram had been in Bethel which is north-west of the Dead Sea.  Shechem and Bethel had been early stops years before when Abram begun his journey (Genesis 12:8).  He had previously set up camp near Bethel and worshiped there by building an altar to God. 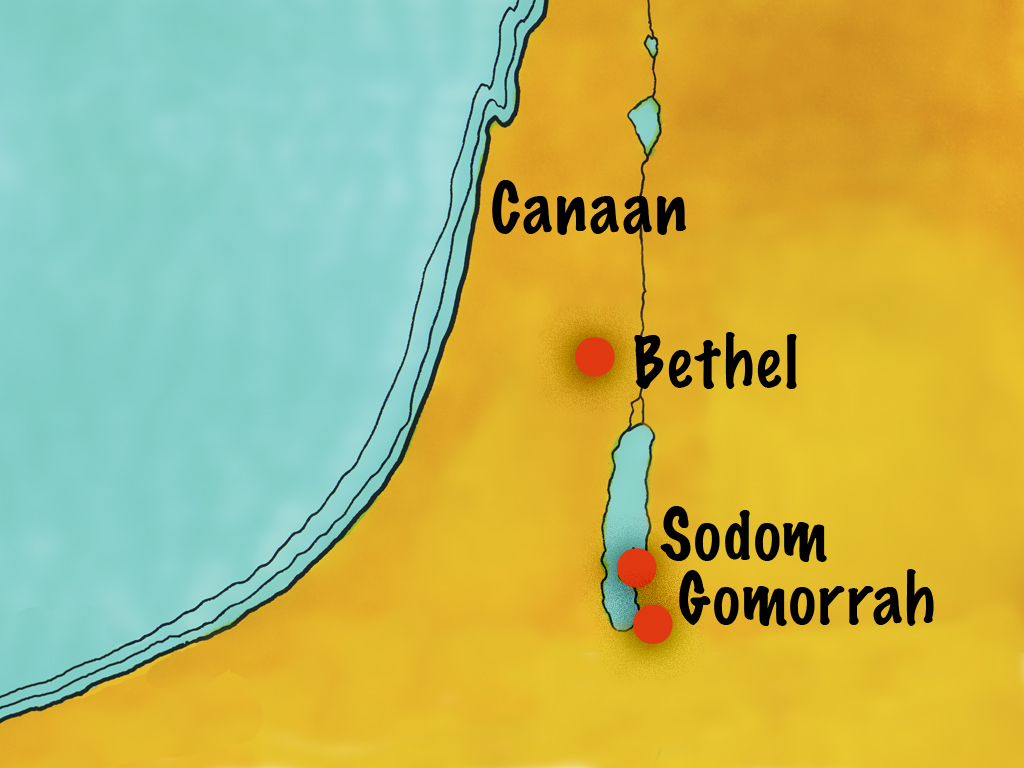 But now, this story opens with Abram, Lot and all of their possessions and livestock located near Bethel.  Besides Abram and Lot, there were also others living in the area (Canaanites and Perizzites) so it soon became apparent that this area was not fertile enough to support all of the flocks and livestock.  Those watching Abram’s and Lot’s flocks and herds began to quarrel over the resources so Abram decided it was best to divide the groups and move to different places.

Lot looked up and saw what, to him, seemed the obvious choice.  It was the fertile land along the Jordan River valley.  He moved all of his possessions and family to live in tents near the city of Sodom.  Choosing to live in tents near this Godless city proved to have disastrous consequences later on.    In Genesis 14:8-16 we find Lot ended up actually having settled in the city of Sodom.  His family was carried off from there during a war and Abram ended up rescuing him.  But Lot eventually returned to that city and his family was brought low in the Destruction of Sodom and Gomorah. 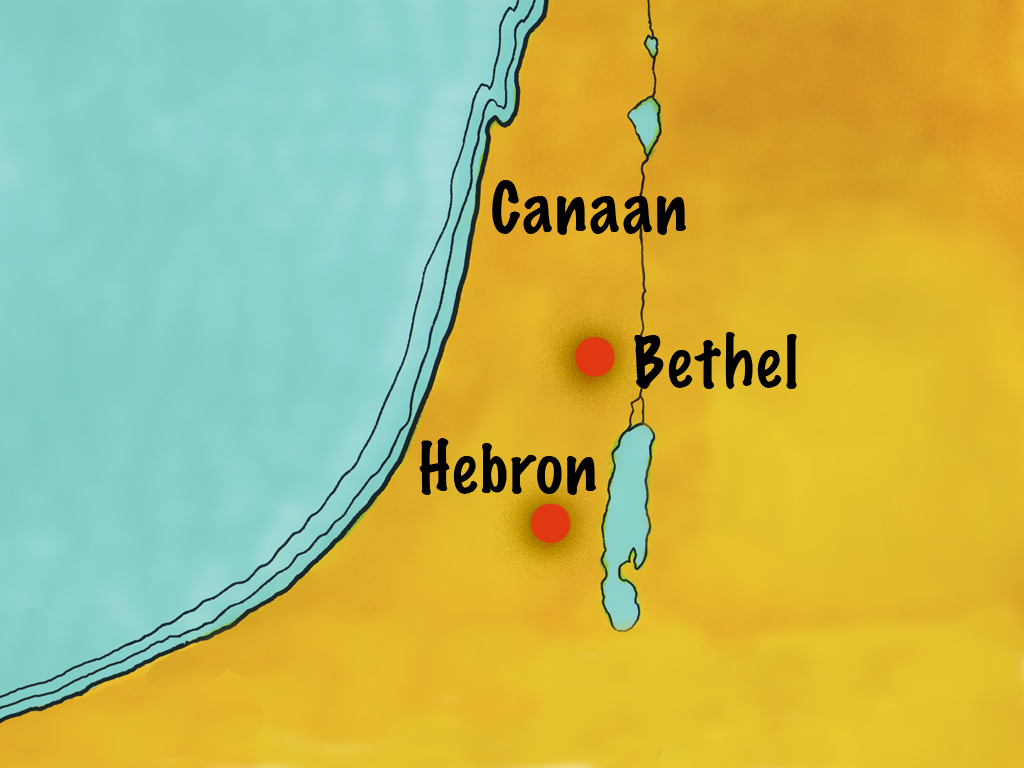 Lot looked up and saw immediate value (Genesis 13:10) while Abram, in direct contrast, looked at land through the vision of faith.  He settled in the land of Canaan in the less fertile area near Hebron.  Abram chose where to live based on his faith in God keeping his promises.  Much later, again in contrast to Lot, Abram will refuse gifts from the King of Sodom because he knew all of his financial blessings came from God alone (Genesis 14:21-24).

The Lord said to Abram after Lot had parted from him, “Look around from where you are, to the north and south, to the east and west. All the land that you see I will give to you and your offspring forever. I will make your offspring like the dust of the earth, so that if anyone could count the dust, then your offspring could be counted. Go, walk through the length and breadth of the land, for I am giving it to you.”  Genesis 13:14-17, NIV

The following are verses about making choices:

Have biscuits (COOKIES) for the class. Make sure that there are some biscuits that are crushed or broken. They should be obviously worse than the rest of the biscuits. Pass the plate to each child and let him/her choose one. Then discuss why they chose the biscuit they chose. Why didn’t they choose the crushed ones? “In today’s lesson, Abram and Lot had to make a choice. One got to choose first and he chose the “best” thing. Let’s see what happens.”
top

Abram, his wife Sarai and his nephew, Lot lived in tents and moved from place to place in the Land of Canaan.  God had a special plan for Abram and his family to bless the people of the world.  Abram had faith in God and went wherever God told him to go.

The family set up tents in the area near the city of Hebron.  Abram and his nephew, Lot, were very wealthy. They each had large flocks and herds, many herdsmen, households, servants, and tents.  Every day the men in charge of the sheep, goats, cattle and donkeys would lead the flocks and herds to places where they could eat grass and drink water.

But there was a problem.  There was not enough grass and water for all of the animals.   It was just too crowded. Abram’s herdsmen thought that Abram should have the best grass-land. Lot’s herdsmen thought that Lot should have the best grass-land. The herdsmen began to quarrel with one another. And, as if that wasn’t enough there were also other people living in the area too.  Everyone wanted the best.

Abram became worried that all of the quarrelling might lead to fighting. He decided that there was only one thing to do. He and Lot would have to live in separate places. Someone was going to have to choose another place to live.  Abram was the older man and was the one who had led them out of their home country. It would have been all right for him to have whichever land he wanted. He could have chosen first and let Lot have whatever was left. But Abram did not choose first.  Instead, Abram decided to let Lot choose first.

When Lot looked around he saw that the Jordan Valley was lush and green.  Surely this would be the best place to live!  So Lot took his family and all of his flocks and moved away from Abram. Lot made his home in the valley. There were a lot of bad people in the valley. Lot had to live near a city called Sodom. The people of Sodom were very wicked. Lot must have been sorry that he chose this valley and had to have such bad neighbours that did not want to obey God.

Abram stayed in the dry land of Canaan.  When Abram looked around after Lot left he saw that the land did not look so lush and green as the Jordan Valley.  But Abram did not just think about the green grass.  Abram had faith in God.  He thought about how God would keep his promises.

“The Lord said to Abram after Lot had parted from him, ‘Look around from where you are, to the north and south, to the east and west. All the land that you see I will give to you and your offspring forever. I will make your offspring like the dust of the earth, so that if anyone could count the dust, then your offspring could be counted. Go, walk through the length and breadth of the land, for I am giving it to you.’”  Genesis 13:14-17, NIV

God continued to bless Abram.  Abram must have been happy that he let Lot have first choice.

Click here to download the slideshow or click here to download the pictures to print.
Each teacher is unique so only use the illustrations that best relate to the way YOU are telling the story in THIS lesson. Too many illustrations can be confusing so eliminate any that cover other stories or details you do not wish to emphasise in this lesson.
top 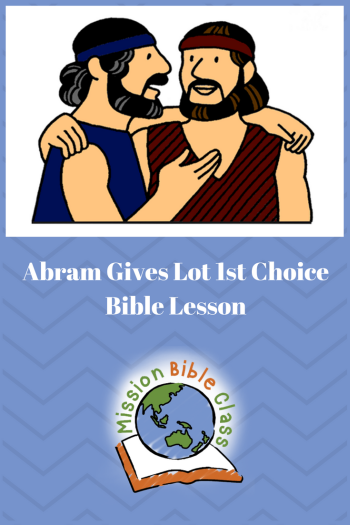