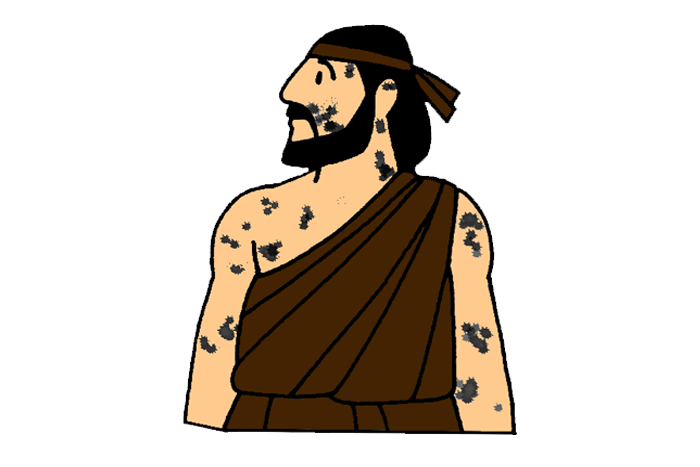 Suggested Emphasis: Obey God, even when parents or teachers are not around.

Naaman, a wealthy military man from the country of Aram (Syria) had leprosy. A young girl who had been captured from Israel and taken away from her parents was the servant of Naaman’s wife. The girl suggested that Naaman should go to the prophet, Elisha, in Israel to be healed. When Naaman followed Elisha’s instructions and dipped in the Jordan River seven times, he was healed of his leprosy.

Aram (modern Syria) was the country northeast of Israel. Naaman was commander of the king’s army in Aram. The king of the Arameans (air-uh-ME-uhnz) was pleased with Naaman’s military victories and referred to him as his servant (2 Kings 5:6), a term used for high officers in the army. He was a valiant soldier, having led his army to victory many times. Naaman was probably a wealthy man. He owned servants including a young girl from Israel who was his wife’s servant. This little girl had been taken away from her parents in a raid and brought to the foreign country of Aram.

Naaman was ill with leprosy, which made him physically unable to perform his duties. He would not be able to lead the army to further victories for Syria if the disease was not stopped. Leprosy was a highly contagious disease so people would shun anyone with it. Because of Naaman’s position, he was permitted to stay in his own home, possibly living in separate rooms from the rest of the family.

It is interesting that this young servant girl from Israel wanted to help her master. She could have just taken the attitude that he deserved what he got. After all, these were the people that took her away from her family. Instead, she told Naaman’s wife that a prophet in Samaria (the capital of Israel) named Elisha could heal her husband (verses 2-3). The fact that this young girl did this also makes plain that she had been taught about God from a very young age. She still loved God and believed in his power even though she was far away from her parents and religious teachers. She believed in God’s power enough to take a big chance and tell her mistress about the prophet, Elisha. The fact that Naaman acted on this little girl’s suggestion shows a combination of his desperation to be healed and the respect he must have had for this little girl.

Armed with a letter from his king, Ben-Hadad (vs. 5), and gifts of gold, silver, and embroidered garments – Naaman went to Israel’s king to ask for Elisha’s help. But the letter frightened Joram. He thought Ben-Hadad was trying to provoke a fight with him. He had no powers to heal this man. Yet if he refused to heal Naaman, the king of Aram would become angry and attack Israel.

God used Elisha to intervene. Elisha heard about the letter and told King Joram not to be angry or afraid. God would heal Naaman.

Naaman went to wait outside of Elisha’s humble house. In his pride, Naaman must have had some preconceptions of how he would be cured. He must have been shocked that Elisha did not even come outside to greet him personally. Instead, the prophet sent a servant to Naaman to say that he should wash seven times in the Jordan River (20 miles away) to be cured. Elisha did not stay in his house because he was afraid of leprosy, but rather realized that Naaman had overestimated his own importance. Elisha gave Naaman a command that would test his faith because he had to do something toward his own cure.

In a temper, Naaman stalked off. He pointed out that the rivers of Damascus in Aram were better than the dirty Jordan, anyway.

You really have to give this man credit for listening to his servants! They pointed out how easy it would be for Naaman to just do what Elisha said. He changed his mind, humbly obeyed God’s prophet, and was cured of the leprosy. Many years later at the synagogue in Nazareth, Jesus referred to the healing of Naaman (Luke 4:27). Jesus also healed a Gentile from that same region (Matt. 15:21-28).

Elisha’s servant, unlike the servants of Naaman, was not faithful to him. Gehazi decided to make some money out of this whole event. After Elisha rejected payment and gifts from Naaman, Gehazi chased him down and asked for payment. Naaman was happy to give the gifts and money. Gehazi hid the money but Elisha immediately knew what he had done. Gehazi was struck with leprosy. The money would have been little comfort, then.
Background Information on the Divided Kingdom.

Bring a box of tissues and a glass of water to class today. Act like you are very ill with a cold. Have a drink of the water and then play like you sneeze into a tissue. Talk about how sick you have been feeling lately. Now ask the children if they would like to use your tissue or drink from your glass. “Of course you wouldn’t want to use my tissue! You would catch my germs. You might catch my cold. There are some kinds of diseases that you can catch by touching people who have the disease. In the time of Elisha there was a terrible disease that you could catch that way. It was called leprosy. You could die if you had leprosy. There was no medicine you could take for it. In today’s story we are going to find out about a man who had leprosy.”
top

Naaman was the commander of the whole army of the country of Aram. He was very rich. He had many servants. Even his wife had a servant girl. She was a little girl from the country of Israel. She had been captured from her home and brought to the country of Aram to be a slave in Naaman’s house. Naaman and his family did not believe in God but the little girl did. Even though she was far away from her parents and from Israel, she remembered the things that her parents had taught her when she was very little. She remembered Elisha, the prophet, and all of the good things he did for God.

Even though Naaman was a commander of the army and very rich, he had a very big problem. He had a terrible disease called leprosy. Leprosy starts out as white spots on the skin. Then the white spots start becoming sorer. If the leprosy spots were on a person’s hands then their hands could become so sore with leprosy that they could fall off. The spots would spread all over your body and finally you would die. It was a horrible thing to have leprosy because there was no medicine that could make it better.

No one wanted to be around someone with leprosy because they might get leprosy too. Naaman had to stay away from everyone. He could not be a soldier anymore and he could not be with his family. Everyone was sad about Naaman.

No one in the whole country of Aram knew how to help Naaman except the servant girl from Israel. She told her mistress, Naaman’s wife, about her God and about Elisha the prophet. Elisha could do miracles because Elisha was a prophet of God. Maybe Naaman could go to Israel and see Elisha.
When Naaman’s wife told him about Elisha, he became very excited. He decided to go to Israel and find out if what the girl said was true. Naaman and his servants had to ride very far to get to Israel. They went to King Joram’s house and then to the house of Elisha.

When he got to Elisha’s house, Naaman sat outside and waited. Naaman was a very important man so he expected Elisha to come outside and give him a very special greeting. Naaman waited but Elisha did not come outside. Instead, a servant came outside and told Naaman that Elisha had a message for him, “Elisha said that you should go and dip in the Jordan River seven times. If you do this then the Lord will take away your leprosy and you will be well.”

Naaman was very angry. Didn’t Elisha know that he was an important army commander? How dare Elisha tell him to go and wash in the dirty Jordan River! If he wanted to wash in a river then he could have done that back in the country of Aram. Naaman was so angry that he started to head for home.

“Please, sir,” said Naaman’s servants, “we really want you to be well again. You will die if the leprosy does not go away. It would be an easy thing to wash in the Jordan River seven times. We have come such a long way. Why don’t you try it?”

Naaman wanted his leprosy to go away too, so he went to the Jordan River. He went to the river and washed. Then he washed again. He did this seven times just as Elisha had said. Naaman came up out of the water and looked at his skin. The leprosy spots were gone! His skin looked perfect! It was as soft and smooth as a little child’s skin.

Naaman went straight back to Elisha’s house. Naaman wanted to give Elisha all of the money, gold and silver and beautiful fabrics that he had brought from Aram. But Elisha would not accept the gifts. He had not done this for money. He had told Naaman how to be healed because he wanted Naaman to know that God is real.

“Elisha, since I have been healed of my leprosy, I know that the God of Israel is real. My wife’s servant girl was right. From now on I will worship the Lord,” promised Naaman. Naaman left and began his journey back to Aram.

Elisha’s servant, Gehazi, was not happy. He thought Elisha should have accepted all of the gifts. Gehazi did not tell Elisha but he followed Naaman and told him a lie. Gehazi told Naaman that Elisha had changed his mind and now Elisha wanted the gifts. Naaman was happy to give Gehazi the gifts and then he continued on his journey.

Elisha was very angry with Gehazi for the way he had tricked Naaman. He told Gehazi that now he would have the leprosy that Naaman had had. Gehazi looked down at his skin and saw that he did have leprosy. Gehazi knew that he had made a big mistake.
top 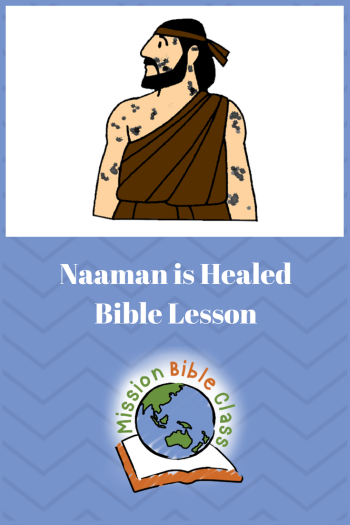