Samuel Becomes a Helper in the Tabernacle 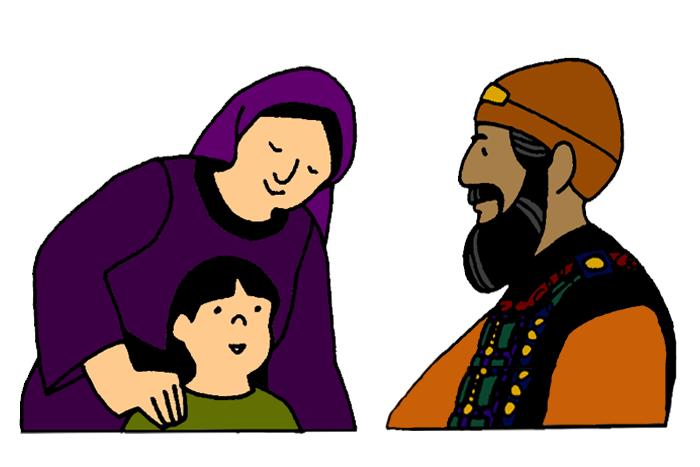 Suggested Emphasis: Children can help in the work of the Lord.

Hannah did not forget the promise that she had made to the Lord. After her son, Samuel, was weaned, she took him to the tabernacle and presented him to Eli, the High Priest. Samuel’s parents returned home but Samuel remained with Eli to be a helper. Samuel would have cleaned, and run errands, and lots of other jobs to help the priests. Every year Hannah made a new robe for Samuel and brought it to him when she and Elkanah visited to tabernacle.

Samuel came on the scene at the end of the time of the judges. He was the last judge.

Samuel was taken to live at the tabernacle when he was weaned (probably three or four years old). As a child he helped the high priest, Eli, with jobs around the tabernacle. Although his parents had given him to Eli to raise in the Lord’s service, they never forgot him.

What tender, loving care Samuel’s parents must have given him as they fulfilled his basic needs for love, food, and clothing. We can only guess how often they thought about and missed their child after he was placed in Eli’s care in the tabernacle. We do know that each year Hannah made Samuel a long, loose robe—a coat—to wear over his tunic. And Hannah and Elkanah delivered the coat when they went to the tabernacle to offer yearly sacrifices. What a personal sacrifice they made by offering their young son to the Lord’s service! 1 Samuel 2:5 reveals that Hannah went on to have six more children after Samuel.

As Samuel grew, he was given responsibilities in the tabernacle. Whenever he was serving, he would wear a linen ephod (ee fod). This was a sleeveless, close-fitting pullover garment, usually of about hip length. It was worn by all who served in the sanctuary of the Lord.

As a boy, Samuel would stay in the tabernacle all night. He probably made sure that the lamps on the seven-branched golden lamp stand did not go out before the sun came up. (See Exodus 27:20-21; Leviticus 24:1-4), Another duty was to open the doors of the tabernacle each morning. (1 Samuel 3:15).

The Tabernacle was the holy tent where God met His people in worship, from the time of Moses until the Great Temple was built in Jerusalem many years after Samuel’s death. The Lord commanded that the finest materials be used in making this tent: gold, silver, bronze, red and purple cloth, soft leather, spices, rubies, sapphires and topaz. The Tabernacle was indeed an awesome sight.

A large courtyard constructed of linen curtains surrounded the tent. In this court stood an altar for burnt offerings and a large basin where the priests washed their hands.

The most important place was the tent itself. It had a wooden frame and was covered with soft animal skins. Inside, the walls were hung with rich tapestries and a veil divided the space in half. In front of the veil stood a table where offering bread was placed. Behind the veil was the Ark of the Covenant, the gold-covered box in which the Ten Commandments were stored. All of these things became a huge part of Samuel’s life. In contrast to Samuel’s genuine devotion to God was the growing misconduct of Eli’s own sons, Hophni and Phinehas. Even though they too had grown up in atmosphere of the tabernacle, they were proving to be more and more of an embarrassment and disappointment to their father, Eli.

“Samuel continued to grow in stature and in favour with the Lord and with men” (1 Samuel 2:26).

For more about Samuel see God Answers Hannah’s Prayer
and The Lord Speaks to Samuel.

Bring cleaning supplies to class today and let the children help clean your class room. If you happen to have some brass or silver items be sure to bring those so the children can polish them. “Eli was a priest in God’s special tent – the tabernacle. He and his helpers had to make sure it was always clean. There was furniture to polish and lamp stands and plates to keep shiny. There was always work to do. Let’s find out about a special helper that lived with Eli.”
top

Hannah and Elkanah loved their son very much. Hannah remembered how it used to be before Samuel was born. She used to be so unhappy. She used to cry because she did not have a baby.

Hannah remembered how she had prayed to the Lord for a baby when she was in the city of Shiloh where the tabernacle was. She had been crying and praying when the High priest, Eli, saw her. In her prayer Hannah had made a promise to the Lord:

“Dear Lord, if you will give me a son then I will promise to give him back to you so he can be a helper to you.”

Now, as Samuel grew bigger and bigger every day, Hannah knew that the time would come that she would have to keep her promise to the Lord. She knew that soon she must take Samuel to the tabernacle to be a helper for the Lord.

Finally the time came. Samuel was not a baby any more. It was time to take him to Eli, the priest, at Shiloh. Hannah knew that Eli would take care of Samuel and teach him how to help at the tabernacle. Samuel’s parents knew that he was a good boy and that he would serve the Lord all of his life. Elkanah and Hannah travelled to Shiloh and went to find Eli at the tabernacle.

“Do you remember me, Eli?” asked Hannah. “I am the woman you saw praying at the tabernacle. God answered my prayer! This is Samuel, my son. He will be a helper. Please teach Samuel to be a special helper to the Lord.”

Eli was very happy to see Samuel. He promised to take good care of him. Eli was very old and he needed someone to help him while he was being the High Priest.

It was difficult to say good-bye but Samuel was happy to be a helper. He wanted to do a good job and make his parents very proud of him. Every year, when Elkanah and Hannah came to visit Samuel, they brought him a very special gift. They would always bring a special coat that Hannah had made for her son. Samuel would have been proud to wear this coat.

Eli probably taught him how to do many jobs in the tabernacle. Samuel was allowed to light the special lamps and make sure they never burned out. He got to be the one to open the tabernacle in the mornings. Sometimes he was even allowed to sleep in the tabernacle tent. When Samuel cleaned the lamps he probably thought a lot about the Lord. Samuel did not just want to do work. He wanted to do things that would make the Lord proud of him.

Sometimes Eli was sad. His two sons, Hophni and Phinehas, did not obey the Lord. People did not like Eli’s sons because they were mean. Eli must have wished that they could obey the Lord like Samuel did.
top 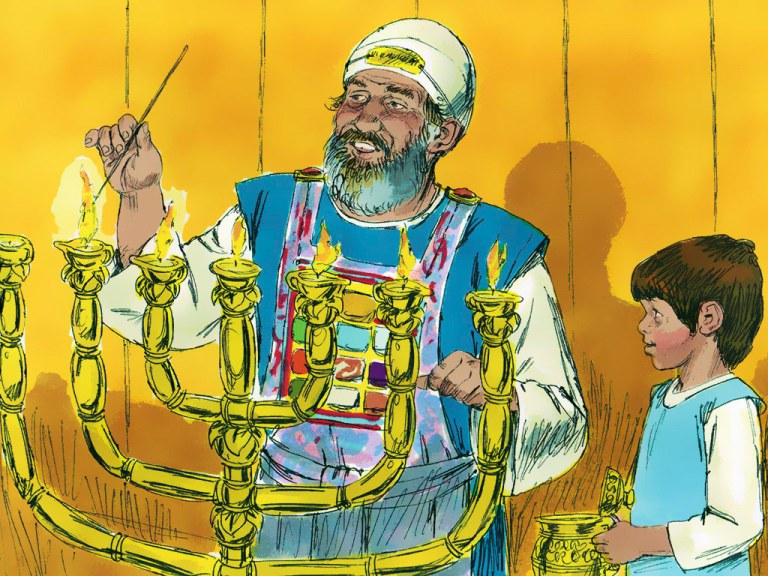 Click here to download this and other illustrations directly from Free Bible Images.
Be selective. Each teacher is unique so only use the illustrations that best relate to the way YOU are telling the story in THIS lesson. Too many illustrations can be confusing so eliminate any that cover other stories or details you do not wish to emphasise in this lesson.  For instance, almost all of slides in the set on Free Bible Images actually illustrate the next story The Lord Speaks to Samuel. 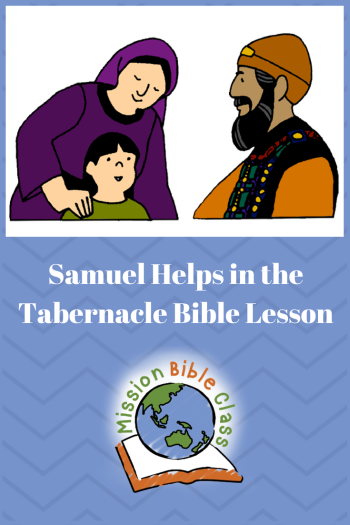