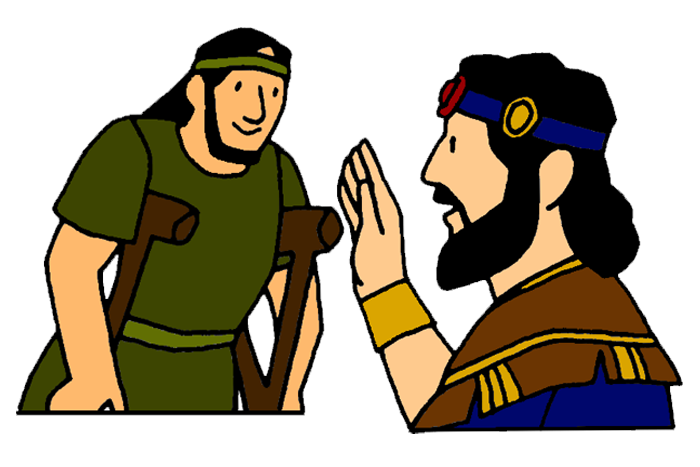 King David remembered his good friend Jonathan. He found out that before Jonathan died, he had had a son named Mephibosheth. David had Mephibosheth brought before him. He gave Mephibosheth all of the land that had belonged to Saul. He also gave him servants and told him that he would always take care of him. He treated him like a son. David did not wait until Mephibosheth asked for help. He gave kindness freely.

Israel was a United Kingdom under David’s rule. After many years of being a nation divided into many parts, Israel now had a central government and a capital, Jerusalem. The tabernacle containing the Ark of the Covenant was now in Jerusalem. This city was now the centre of worship for the nation.

Several years had passed since David became the king. David still missed his good friend Jonathan. Jonathan had died in battle with his father, Saul. David had never forgotten his covenant with Jonathan (1 Samuel 20:15, 42). Though David had suffered greatly because of Saul’s jealous wrath, David did not retaliate against Saul’s family. He did not tolerate abusive treatment of any of the members of Saul’s family. Still, he wished there were something more he could do.

It may seem odd to us that David would try to find out if there were any descendants of Jonathan still living. It was a common practice in Bible-time cultures for a new king who was not descended from the previous king to wipe out all the relatives of the previous king. This was done to prevent any of them from trying to reclaim the throne. David had not wanted Saul’s descendants killed, but he didn’t know for sure what had happened to them. As the assassination of Saul’s other son – Ish-Bosheth (I1 Samuel 4) – had shown, some military men may have taken it upon themselves to kill the members of Saul’s family.

David was told that Mephibosheth, the crippled son of Jonathan, was alive and living near Jerusalem. David immediately ordered his servants to bring Mephibosheth to the palace. When Mephibosheth arrived, he was probably very nervous because he was uncertain of the king’s intentions. The descendants of the deposed king would not want to be brought before the new king.

David was far from a perfect person. But he was called a man after God’s own heart (1 Samuel 13:14). God is intimately concerned with the weak and disadvantaged in our world. David demonstrated that same concern in his treatment of Mephibosheth. God calls us to share this same spirit of concern for those who are in need.

Write the word “KINDNESS” in bold letters on the middle of a piece of paper. (Or, if the children cannot read yet, copy a small picture depicting kindness onto the middle of a paper) Pass the paper around to each child and tell them to tear off a piece of the paper without tearing any of the letters. Keep passing it around until someone tears the word or until it becomes too difficult. This is just a fun way to begin talking about the word kindness. “What does kindness mean? Has anyone ever been kind to you?” Share your own stories. “In today’s story we are going to learn about a time when King David was very kind to someone.”
top

Many years had passed and Mephibosheth was a grown man with his own sons. David did not know about Mephibosheth. He thought all of Jonathan’s sons were dead. Sometimes David remembered what it was like when he and his good friend, Jonathan, used to do fun things together. Jonathan had loved David and David had loved Jonathan.

The more David thought about Jonathan, the more he wanted to keep his promise. David had an idea. He decided to ask Saul’s old servant, Ziba, about Jonathan’s family.

“Ziba, you were Saul’s servant. You knew Jonathan and his family. Does Jonathan have any children that are still alive,” he asked.

Ziba, Saul’s servant, answered, “There is one son, King David. His name is Mephibosheth. Something very sad happened to Mephibosheth when he was little. He cannot walk.”

“Ziba, I command you to find Mephibosheth and bring him to me.”

Then Ziba went quickly and found Mephibosheth. At first Mephibosheth was afraid to come to meet David. He was worried that David might try to hurt him. Sometimes new kings did that the children and grandchildren of the old king.

But that is not what David did. King David welcomed Mephibosheth. He told him about how Jonathan had been his good friend. The king probably told him about how Jonathan used to give him lots of gifts. King David also told Mephibosheth about the special promise that he had made to Jonathan. The king wanted to do something special for his friend’s grandson.

Mephibosheth could hardly believe what he was hearing! “Oh no, King David, I am not worthy of this honour,” exclaimed Mephibosheth.

“No, Mephibosheth, I promised your father that I would always take care of you. Other people have taken the land that belonged to Saul and Jonathan and your family. I will now give all of it back to you. Also, I would like to make a special place at by table for you. Anytime you want to come and eat with me or visit me at the palace you can come. You will never have to worry about anything because I will always take care of you,” said David.

Mephibosheth went away happily to tell his family the good news. He told everyone about the kind king. David kept his promise to Mephibosheth and took care of him for the rest of his life.
top 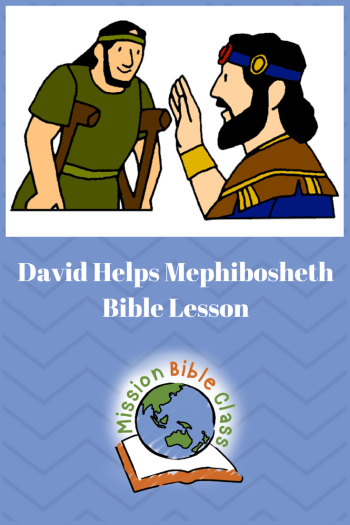