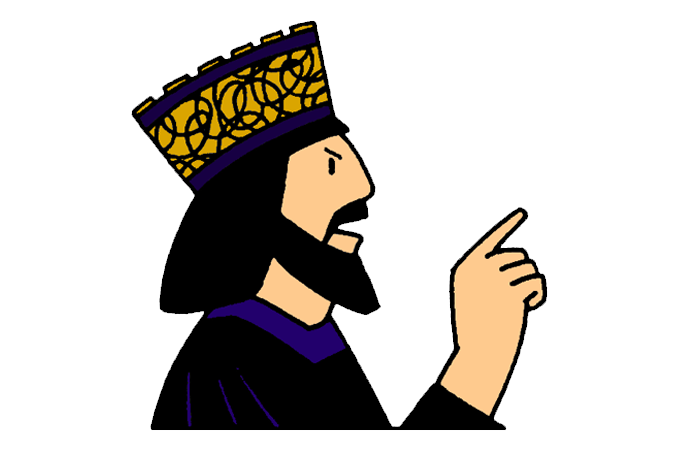 Suggested Emphasis: Accept responsibility for sin we commit and do not blame others.

The Lord gave King Saul specific instructions on how to handle a battle with the enemy, the Amalekites. King Saul disobeyed the Lord in front of all of the people and then he refused to admit his own sin. When Samuel confronted him, Saul made excuses and even blamed others. At this time, the Lord rejected Saul as King.

Saul had been chosen by God to be the first king of Israel. He had no palace, army, nor royal city, so he simply went back to his farm to live. Only when the people of Jabesh-gilead (Jay besh gil e ud) were being attacked did Saul begin to act like a king. He immediately called the men of Israel together to form an army and saved Jabesh-gilead. After this, Saul was crowned king in an official coronation ceremony. Saul continued to lead the people against many of their enemies. He always consulted God through Samuel and offered sacrifices before battles. He began reigning as a man who loved God.

Saul and his son, Jonathan, fought together to defend Israel. Jonathan distinguished himself in battle (1 Samuel 13:23-14:23).

Samuel was disappointed in Saul many times. Saul did not carefully follow the Lord. Even before today’s story the Lord revealed to Samuel that Saul would be replaced as king. This was because Saul tried to act as a priest and offer a sacrifice to the Lord (1 Samuel 13:5-14).

Now Samuel brought God’s message to Saul: “Go and completely destroy the Amalekites and everything they possess. The Amalekites were descendants of Esau. They were a warlike people. They lived primarily south of Canaan, in the Negev area and sometimes in the Sinai region.

God had a very good reason for wanting Saul to destroy the Amalekites. They were the first nation to attack the Israelites when they left Egypt (Exodus 17:8; Numbers 14:45). Even after Israel defeated them at this battle, they continued to harass and attack Israel. They would attack from the rear, killing any Israelite who could not keep up with the rest of the group. They were described as a nation having no fear of the Lord.

Years earlier Moses had pronounced a curse from God on the Amalekites. He said that when the Israelites had settled in the promised land, they would return to completely destroy the Amalekites. (See Deuteronomy 25:19) Now God was keeping that promise through Saul and his army.

Saul called the army together at Telaim (Te lay im) in the Negev region. When they were ready for battle, Saul sent word to the Kenites (Kee nites) to leave the area or be killed. The Kenites were a semi-nomadic people who also lived in southern Canaan and Sinai.

The Amalekites were destroyed from Havilah (Hav ih luh) to Shur. These were cities or regions located at opposite ends of the Amalekite territory. Havilah was in the western part of Arabia. The exact spot is unknown, but it is believed to be in the north of modern Yemen. Shur was on the eastern border of Egypt.

The Lord had told Saul to destroy everything. Saul just could not pass up a chance to make himself look good. It was a practice among heathen nations to keep a conquered king alive. They would take him back to their country. In front of his people, the victor would put out the eyes of his captive king and otherwise humiliate him. Then he would be put to death.

Saul had become very proud of himself. He kept the Amalekite king alive, as well as the best of everything else. When he returned to Israel, he even erected a monument to himself at Carmel.

Samuel had to tell Saul of the Lord’s anger. Instead of repenting, Saul tried lying and then made excuses. He blamed the soldiers and then said that they only kept the animals alive to make sacrifices to the Lord. Even though Saul finally confessed (1 Samuel 15:24) he continued to try to pass the responsibility onto others. He even asked Samuel to try to make him look good in front of the people (15:30-31).

Bring two puppets to class or make your own. A simple way to do this is to draw a simple face (eyes, nose, and mouth) on the pad of your index finger. Draw faces on each index finger and these can be your simple puppets. Introduce your puppet friends to the class. Be sure to give them names. Tell the children that these two “children” have done something wrong. They were wrestling around and they knocked over a beautiful vase. The vase broke. Now tell the class that the “children” are going to have to make a choice. They can do the right thing or the wrong thing. See if they can guess which is which. Proceed to let the puppets act out two scenes. One puppet goes and tells his mother and tells her he is very sorry. He says he knows that he did a bad thing and he wants to pay for the vase. The other puppet goes and tells his mother that it is the other one’s fault. He says that it was not his fault at all. “Which of our friends did the right thing? Once there was a king who did something wrong. Let’s see if he is sorry for what he did?”
top

The people were very glad that Saul was their king. At first he was a good king and tried to obey the Lord. He listened to Samuel’s good advice.

Saul had a son named Jonathan. Saul and Jonathan fought in battles together against their enemies. The enemies would try to hurt the Israelites and take their land away.

Even though Saul was a good king at first, he later started to turn away from the Lord. Once, he tried to act like a priest and offer a sacrifice to the Lord. When Samuel heard about that he was very sad and angry. He knew Saul was wrong to act like he was a priest. Only Samuel was the priest. Samuel told Saul that God would have to choose a different king. God did not want Saul to be king any more.

Finally, Saul said that he knew he had done wrong. But Saul did not want to say he was sorry in front of all of the people.

Samuel was very sad. He knew that Saul was not a good king any more. When Saul did something wrong he couldn’t even admit it. He tried to blame other people and make excuses. The Lord wants all of us to say we are sorry when we do wrong. He wants us to admit that we did wrong and not blame others. 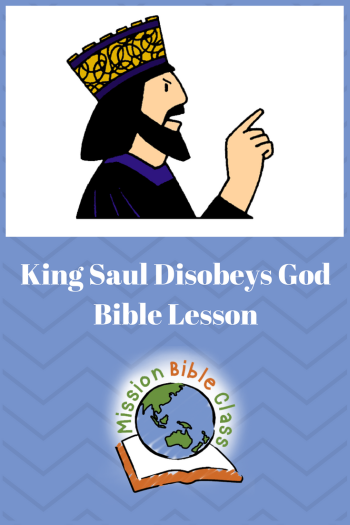