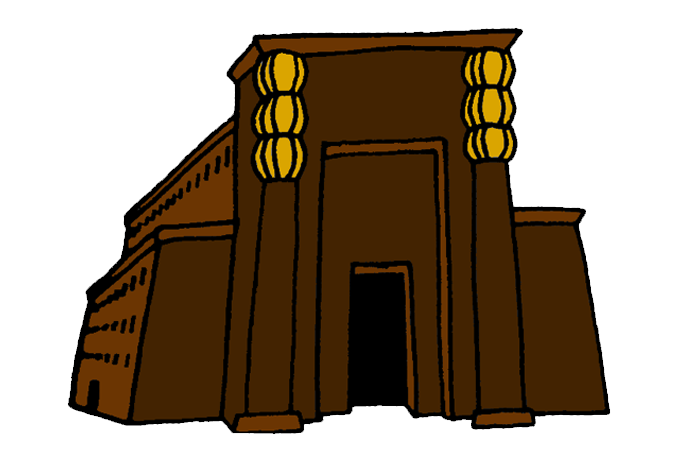 Suggested Emphasis: Beautiful church buildings mean nothing if the people who worship there do not serve the Lord.

Solomon built a fantastic temple for the Lord. This replaced the Tabernacle tent that had been used since the time of Moses. After the temple was completed, the Lord reminded Solomon that if the people ever turned away from Him then this huge, beautiful temple would mean nothing.

Please take time to read through today’s scriptures carefully. Your visualization of the splendour of the temple will help you get the story across to your students.

Approximately four years had passed since Solomon became king. With his claim to the throne firmly established, Solomon now began his building projects. The palace and temple would end up taking 20 years (1 Kings 9:10).

The construction of the temple was probably the most significant event of Solomon’s reign. After the war-torn years of the judges, Saul, and David, Israel finally began to enjoy the “rest” God had promised. Building the temple symbolized this peace and stability.

One of David’s greatest desires had been to build a temple for God. Even though David was Israel’s most godly king, God did not want David to build the temple. The house of God’s peace was not to be built by a warrior king. Therefore, the job fell to the one who was not known for his military prowess, but for his godly wisdom, King Solomon.

Solomon conscripted approximately 30,000 men from all of Israel to help harvest the timber from Lebanon. They were divided into three shifts. The shifts alternated monthly so that the men spent one month in Lebanon and two months at home during the years it took to harvest the timber (1 Kings 5:13-14).

Solomon also conscripted more than 150,000 labourers from the descendants of the previous inhabitants of the land. These labourers quarried and transported all the stone for the temple (2 Chronicles 2:17-18).

The two weeks of festivities to dedicate the temple were glorious and filled with fanfare and ceremony. This was a special time in the history of the nation of Israel. Considering this, it is interesting to note that the Lord waited until all of the crowds had been sent home (8:65-66) before He appeared to Solomon with a special message. Perhaps the Lord did not want the new message to be lost in the fanfare. He particularly wanted Solomon to take note of the MOST important reason that the temple was built – GOD. The Lord told Solomon that He would reject the temple if Solomon or his descendants did not walk in the ways of the Lord (9:6-9).

Solomon and the Israelites sought to provide a worthy dwelling place for their God. And the temple they built was indeed magnificent. The Lord made it known that his presence was there (8:10-11) but his presence was conditional. Even Solomon understood that the Lord was not limited to a building (8:27).

Find pictures of all different types of church buildings and bring them to class. You might even have the children describe or draw their ideal church building. Lead the discussion into the idea that the kind of building is not the important thing. GOD is the most important.
top

King David, thought that he would build a beautiful building, or temple, to the Lord. He thought that the Ark of the Covenant should be kept in a building instead of a tent. That way it would stay in one place instead of being moved around. But the Lord did not want David to build the temple. He wanted David’s son, Solomon, to build it.

When King David died Solomon became the new king. King Solomon made lots of plans for the temple and the temple he built was very special. It was made of special stone on the outside and cedar wood on the inside. The cedar wood walls had beautiful carvings of angels, palm trees and flowers on them. The floor of the temple was made of solid gold.

There were two main rooms. The biggest room was called the Holy Place and only priests could go in it. There was also a smaller room with gold walls called the Most Holy Place. Only the High Priest could go in the Most Holy Place. Inside this room there were two huge angels carved from olive wood. Their wings stretched from one side of the room to the other. Solomon even had these angel statues covered with gold. All of this beautiful gold and the beautiful carvings would show how wonderful God was. It took thousands of workers seven years to build the temple.

When the Ark and special furniture was placed inside the temple, a huge cloud filled the Most Holy Place. The cloud was so thick that the priests could not even see enough to do their jobs. Everyone knew that the presence of the Lord was in the Temple.

After everyone had left, the Lord spoke to Solomon, “I am pleased with the temple you have built for me, Solomon. Just remember one thing. The temple is beautiful and everyone will think of me when they come here. As long as you and the people obey me and follow my teachings then the temple will be a wonderful place. But if you or the people disobey me then all of the gold and beautiful carvings will be worth nothing.” 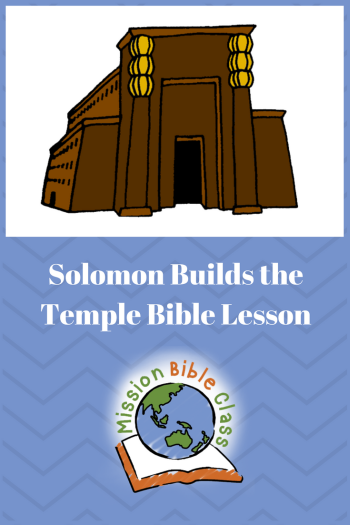