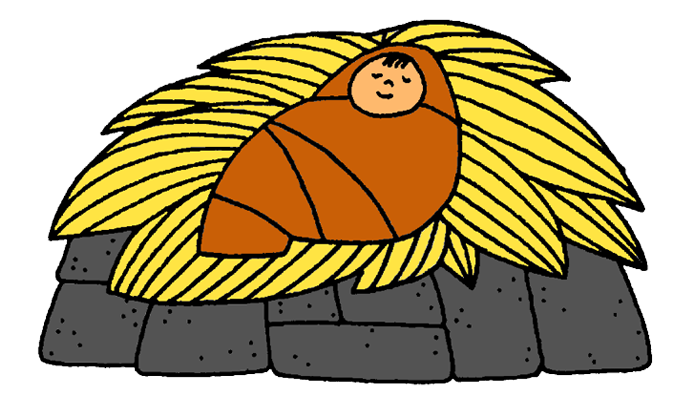 Suggested Emphasis: God sent Jesus from heaven to earth in the form of a little baby. We should thank God for His gift to the world.

Joseph and Mary traveled from Nazareth to Bethlehem to register for the census. While they were in Bethlehem, Jesus was born. The angel of the Lord told shepherds of Jesus’ birth. The shepherds went and worshiped Jesus.

(For background read Luke 1:1-80 and Matthew 1:18-25) Caesar Augustus ruled the Roman Empire (31 B.C. to A.D. 14). He wanted to find out how many people were in the empire. This was probably done in connection with the taxes he wanted to collect. Syria was north of the Jew’s country, but apparently in the Roman organisation, the governor of Syria had something to do with the census in Palestine. This was the first such census he directed. Years later, Quirinius of Syria disturbed the Jews by coming to conduct a census (Acts 5:37). Luke says he is not writing about that census, but an earlier one.

“His own town” means the city from which a man’s family came. The official family records were kept there, and a man was expected to go there to register. The family records for David’s descendants were kept in Bethlehem. Bethlehem was 110 kilometres (70 miles) south of Nazareth.

Mary was about to have a baby, but her child was the Son of God, not the son of Joseph. This fact is very clear in Luke and in Matthew 1:18-25.

Probably the inn was overcrowded because many descendants of David had come to register. Mary and Joseph found themselves in a more unusual place to stay, a room where animals were kept. The animals’ feed box became a cot (crib) for Mary’s child. The cloths were the usual clothes for a new baby. They would have wrapped him more tightly than modern babies are wrapped.

There was much pastureland near Bethlehem. Several flocks of sheep might be brought together at night so each shepherd could take his turn at standing watch while the others slept. The watchmen guarded the sheep against wild animals or human thieves. In the dark night the angel suddenly stood close by them, with the light of God’s glory shining all around. The angel didn’t want to frighten them. He came to bring good news for them and for everybody else.

Christ was the descriptive title given to the Saviour whom Isaiah had promised; it means “Anointed One.” For hundreds of years the Jewish people had been hoping for the “Anointed One” God had promised, and now He had arrived!

The angel knew the shepherds would want to see the Saviour, so he told them how they would know when they had found Him. There may have been other babies wrapped in cloths in Bethlehem, but probably only one had a manger for his bed. A crowd of angels appeared as suddenly as the first one had come.

The shepherds lost no time in going to see the Saviour. “Spread the word” may be translated “made known thoroughly”, and some manuscripts say simply “made known.” The shepherds may not have told everybody in Bethlehem, but they told those at the manger what the angel had told them. Those who heard the story the shepherds told must have been puzzled by it. No doubt Mary remembered and thought about these things as long as she lived. For the shepherds it was a night filled with praise to God.

Have you ever thought about the reason for a census? It helps governments make objective judgements about things like roads, taxes, community needs, etc. Have you ever thought about keeping an attendance record of your students? This will be a good reminder to send the child a card or give them a ring to let them know that you missed them. Also, it can help us be objective. We might wonder why a student is misbehaving instead of paying attention to the lesson. If we have a record we might notice that the child has not been there for three Sundays out of the last five. No wonder he is not interested in review games! We can then find other ways to involve the child.

(Make a poster using baby photos from the children and others in the church – both young and old. Be sure to include your own. Some photos of teens of the congregation would be interesting to the children also.) Let children guess who each of the babies are. Name the Father and Mother of each one mentioned and possibly where they were born. “Today we are going to learn about a very special baby. This is a baby who was sent especially by God. His mother’s name was Mary. Can anyone guess who his Father was? This baby was the Son of God. Today we are going to learn about how God sent his own son as a special gift to everyone in the world.”
top

Joseph and Mary were married and lived in the town of Nazareth. God had chosen Mary to be the mother of a very special baby who was the son of God. Joseph was a good man and took care of Mary and her baby.

While Mary was pregnant she went to visit her much older cousin, Elizabeth. When Elizabeth saw Mary she felt the baby inside of her tummy move around. This was a happy day. In the future Mary’s baby and Elizabeth’s baby would be cousins. They would be Jesus and John the Baptist.

Joseph and Mary lived in a town called Nazareth. The Romans were in charge of the country. One day, the ruler of the country, called Caesar Augustus, sent a letter to Nazareth saying that all the people had to go to the city where their families came from. Every person in the family had to be counted. This was called a census. He wanted to know exactly how many people there were because he wanted everyone to pay taxes.

Joseph and his family had come from a little town called Bethlehem. Bethlehem was a long way from Nazareth. Of course there were no planes or cars back then. People had to walk or ride animals. Because Joseph and Mary needed to do what the king commanded, they packed up their things. Mary rode a donkey, while Joseph walked beside her. They began their trip to Bethlehem.

When they arrived, they found the roads very crowded with people. They looked and looked for a place to stay, but all the guest rooms were full. It was growing very late. Mary was tired. It was almost time for her baby to be born. Joseph was also tired and needed a place to rest.

God had not forgotten Mary and Joseph. Joseph saw a place or room where the animals were kept at night. He led Mary where it was warm and safe. They were glad to find a place to rest from their long journey.

During the night a wonderful thing happened. Mary had her baby. Mary was so happy. It was a son just as God had promised. He was the Son of God. Joseph and Mary gave him the name of “Jesus”.

Joseph looked for a place to put the newborn baby. He found a box full of straw. This was the kind of box that farmers put hay in so the animals could eat from it. It was called a manger. Mary fixed the straw and put a piece of cloth on it. Then she wrapped the baby up tightly and placed Him in the warm straw.

Outside the city, some shepherds were watching over their flocks of sheep in the quiet night. Suddenly, a great light filled all of the sky. They had never seen anything like it before. In the middle of the light they saw an angel. The angel spoke to them. He said, “Do not be afraid. I bring you good news of great joy that will be for all the people. Today in the town of David a Saviour has been born to you; he is Christ, the Lord. This will be a sign to you: You will find a baby wrapped in cloths and lying in a manger.”

All of a sudden, there was not just one angel but also many other angels and they were praising God, saying, “Glory to God in the highest, and on earth peace to men on whom his favour rests!”

Of all the gifts that anyone could ever give, the shepherds knew that God’s gift was the best. God had given this little baby to the world.

Click here for an additional slideshow and illustrations for this story.

(How to choose the best learning activities for my teaching situation)
Activities: 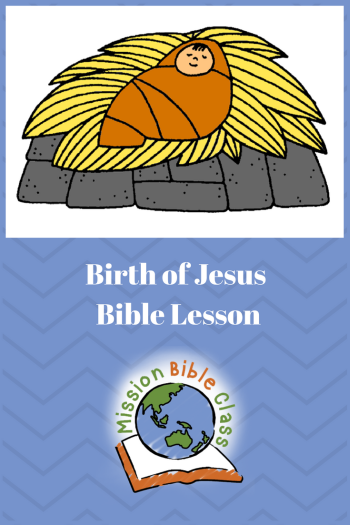