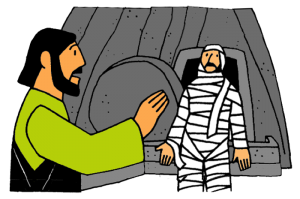 Suggested Emphasis: Jesus cares when we are sad.

Mary and Martha sent for Jesus when their brother, Lazarus got sick. When Jesus arrived at the home of these good friends, Lazarus had already been dead four days and he was buried in a tomb. Jesus was sad to see his friends so sad. He stood in front of the tomb and called his friend’s name. Lazarus came back to life and came out of the tomb.

This story is only recorded in the gospel of John. In fact, despite the fact that Jesus was very good friends with him, we only read about Lazarus in John chapters 11-12. It is another Lazarus in Jesus’ story in Luke 16:19-31.

Bethany was less than two miles from Jerusalem. It was a small settlement at the edge of the Judean desert on the slope of the Mount of Olives.

At the time Lazarus got sick, Jesus was preaching on the eastern side of the Jordan near the place where John the Baptist had baptised him. Lazarus must have died just after Mary and Martha sent messengers to tell Jesus of his sickness. Jesus waited two days to go to Lazarus because he knew that this sickness would not end in death (verse 4). Add the travelling time of the messengers and Jesus together with the two days and you come up with four days. This was the amount of time that Lazarus was dead before Jesus came to him.

It was customary for a person to be buried on the same day as they died. The body was washed and anointed with spices. The Jews did not embalm bodies. They placed a cloth over the head and wrapped the hands and feet separately in strips of linen. The linen strips were then wrapped around the body over the clothing. Months after today’s story, Jesus’ body would be prepared in this same way (John 19:39-40 and 20:3-7).

Many bodies were buried in caves. There might be a number of niches in the tomb where bodies of family members were placed. The tombs had a small entrance that was closed by rolling a big stone against it.

It was usual for friends and family to visit and offer comfort at a time like this. It was Jewish custom to have three days of very heavy mourning then four of heavy mourning, followed by lighter mourning for the remainder of 30 days. Mary’s “weeping” in verse 33 means loud wailing. This in contrast to the word used for a quieter shedding of tears when Jesus “wept” in verse 35. John 11:33-35

Jesus empathised and shared this moment of sorrow with his friends. Even though he knew that Lazarus would be raised, he also knew Mary and Martha were disappointed he hadn’t come before Lazarus died. He wept with them.

Jesus could have resurrected Lazarus from a distance or even prevented his death. That would have meant his friends would not have had to be sad. He knew that it was the will of the Father that Lazarus would die and that his resurrection would show God’s glory (verse 40). He did not raise Lazarus to make his friends happy. He raised Lazarus to show the glory of God.

The ever-practical Mary was shocked when Jesus asked for the stone to be rolled back. She knew the body would smell after this time had passed. Imagine how she and the others felt when Jesus called for Lazarus to come out (verse 43). It has been humorously noted that Jesus had to call Lazarus by name because if he had not then who knows how many people would have walked out of the tombs that day!

Children love the picture of Lazarus hopping out of the tomb. Remember, he would have been wrapped in all of those burial cloths. He could not have walked. Perhaps he even floated out of the tomb? Jesus had to tell the onlookers to take his grave clothes off and let him go (verse 44).

If it is appropriate for your class you might like to discuss funerals that you or they have attended. Talk about the sadness and how we can pray to God because he understands. Children often find it easier to talk about these things than adults. “Today we are going to learn about a time when one of Jesus’ friends died”.
top

One time, when Jesus was far away preaching about God, Lazarus got sick. Mary and Martha were very worried about their brother. They thought he might die.

“Let’s send someone to go and get our friend Jesus,” the sisters said. “Jesus can help Lazarus get better.” So Mary and Martha sent a messenger to find Jesus.

When the messengers found Jesus they asked him to hurry to Lazarus’ house because he was very sick. Jesus said, “Don’t worry; this sickness will not end in death.” Jesus kept teaching the people for two more days before he travelled to Bethany.

After the two days had passed Jesus told the disciples, “We have to go to Bethany because Lazarus has fallen asleep. I have to go wake him up.” When he saw the disciples did not understand he explained, “Lazarus is dead.”

The disciples were very confused while they were travelling to the town of Bethany. What did all this mean? How did Jesus know that Lazarus was dead? How could you “wake up” a dead person?

Finally, Jesus and the disciples arrived in Bethany. Lots of people had come to Mary and Martha’s house. Many of them were crying. Jesus was not surprised because he knew that they were all crying about Lazarus. Lazarus had been dead for four days.

Martha went out to meet Jesus. Martha was very sad, “Jesus,” she said, “if you had gotten here earlier then Lazarus would not have died!”

Jesus said to her, “Don’t worry, Martha, your brother will rise again.” Martha did not understand. She thought Jesus meant that Lazarus would be alive again when he got to heaven. She went to go get Mary.

When Mary heard that Jesus was in town she quickly went to meet him. She was so sad about Lazarus that she was crying very loudly when she said, “Jesus, if you had been here sooner then Lazarus would not have died.”

Jesus knew that everything would be all right but he was very sorry to see Mary so sad. Jesus knows what it is like to feel very sad. He cared so much for Mary that he cried too.

Then Jesus asked someone to take him to the place where Lazarus was buried. When Lazarus had died the family had to take care of his body. In those times they put a cloth over the dead person’s head. Then they wrapped the hands and feet in strips of cloths. After that they used long strips of cloths to wrap around and around the body until the person was all wrapped up. Sometimes they put sweet smelling perfumes like aloes in the cloths so that the body would not stink so much. Then they put the body in a cave or a tomb and put a big stone over the door. Lots of family members were often buried in the same cave or tomb.

Lazarus was buried in a cave. Lots of people were gathered around it. When Jesus arrived at the cave he asked the people to roll the stone out of the entrance. Martha gasped, “Jesus, how can we do that? Lazarus has been dead for four days. His body will stink.”

“Martha, just you wait and see. If you believe then you will see the glory of God.”

The people took away the big stone. After Jesus prayed he called out in a loud voice, “Lazarus, come out!” What was Jesus doing? Didn’t he know that Lazarus was dead? What do you think was happening?

Jesus told the crowd, “Go ahead, and take his grave clothes off so he can move around.”

What a happy day this must have been in Bethany. At the beginning of the day everyone had been sad but now they were happy. God and Jesus know what it is like to be sad. When we are sad we can pray to God and he will help us feel better.
top 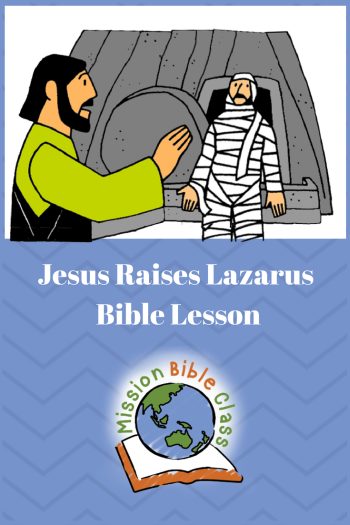