Night of Betrayal and Prayer 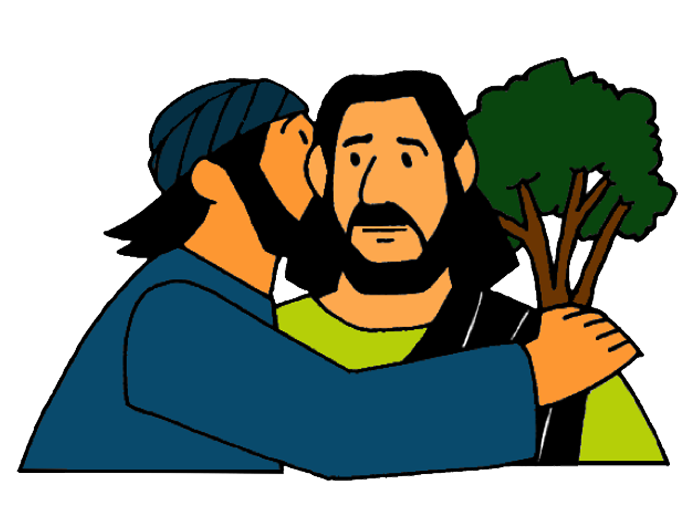 Suggested Emphasis: Pray for courage when bad things are happening.

One of the apostles, Judas, secretly made plans to help the Jewish leaders have Jesus arrested. During the Passover meal Jesus knew that Judas was the one who would betray him. Jesus knew that he would die soon so he went to a place called Gethsemane so that he could spend the night praying. Judas returned with soldiers and Jesus was arrested.

In addition to the accounts from the other gospels listed above you can also read John’s version in (John chapters 13-18). John’s account contains more of Jesus’ words. John chapter 13 outlines the moments before the Last Supper began. This is when Jesus washes the disciples’ feet. In chapters 13-16 John records how Jesus warns the disciples of his upcoming death (13:33 “I will be with you only a little longer”) and comforts them (16:33 ”I have told you these things, so that in me you may have peace”). In this world you will have trouble. But take heart! I have overcome the world”). John 17 contains Jesus’ prayer in the Gethsemane and chapter 18:1-11 records his arrest.

(Mark 14) The Jewish leaders had wanted to get rid of Jesus for quite some time but they had decided to wait until after Passover for fear of rioting (14:1-2). Jerusalem’s usual population was near 50,000 but several hundred thousand people often gathered there for Passover week. There were many people who admired Jesus so they had to be careful. They must not have been able to resist the opportunity when Judas Iscariot sought them out (14:11).

Judas agreed to a price of 30 silver coins. This would have been equivalent to one day’s work. Judas has already been shown to have a problem with money (John 12:4-6).

(Matthew 26) During the Last Supper Jesus reveals that he would be betrayed. But it is not only Judas who will leave Jesus. He says that they will all fall away on this very night (Matthew 26:31). In just a few hours they did indeed desert him (Matthew 26:56).  Peter cannot imagine that he would ever desert Jesus but Jesus tells him that he will disown him three times before the rooster crows( Matthew 26:33-35). in this lesson and then later, in the following lesson on this site (The Trial of Jesus) we learn events happened just as Jesus said they would (Matthew 26:69-75).

After eating, Jesus and his disciples went to Gethsemane on the lower slopes of the Mount of Olives. Gethsemane means “oil press”. Jesus returned to this place every evening to pray (Luke 21:37) so it must have been a favourite spot. Jesus knew he needed to spend time with his father in prayer before facing a terrible time. He knew his disciples needed to prepare for the time also so he asked them to pray (Luke 22:40). Most of the disciples stayed at a distance but Jesus asked Peter, James and John to come along with him and keep watch while he prayed (Mark 14:32-35). Perhaps he felt a certain closeness to these disciples and wanted them with him for comfort. How disappointed he must have been when they could not even stay awake (Mark 14:37-42). Luke mentions that angels ministered to Jesus and gave him comfort (Luke 22:43).

Three times Jesus asked his Father that the cup passes from him. The cup represented the death and suffering that Jesus was about to suffer for mankind. He was committed to doing the Father’s will but it was not to be easy. This agonising prayer shows that there is no other way for it to be done. Jesus anxiety is seen in the way his sweat was like drops of blood (Luke 22:44). This could mean that he was sweating so much that it was dripping off of him like blood. Or, it could mean that his anxiety led him to suffer from a stress induced medical condition in which blood and sweat mingle.

(Matthew 26:47-56) Judas and a mob arrive in the garden. The odd assortment of servants, soldiers, religious leaders carrying swords and clubs indicates that this is a mob quickly thrown together by the Jewish leaders. Kissing a teacher (rabbi) was a common greeting from a student. In this case it was the arranged signal.  Peter tries to protect Jesus and attacks one of the men and cuts off his ear (26:50). Jesus stops Peter and heals the man’s ear (Matthew 26:52-56). He knows that Peter cannot stop the fulfilment of prophecy so he peacefully allows himself to be arrested.

Talk about some emergency situations in which the children could find themselves (fire, someone choking, car accident, etc.). Ask them how they would get help in these situations. Most of the time the children will mention ringing the emergency number (111). Sometimes when we are in trouble we need help. If there is an emergency we do not ring the movie theatre or car sales. We ring the hospital or ambulance or someone who can actually help us. In today’s story, Jesus was very upset because He knew something terrible was just about to happen. Jesus went to talk to the only One who could really help–God.
top

Judas Iscariot was one of the twelve disciples of Jesus. He followed Jesus and listened to the things Jesus preached. Judas was Jesus’ friend at first but then he decided he did not want to be Jesus’ friend. In fact, he decided he would do something very bad to Jesus.

There were some other people that did not like Jesus. These men were leaders of God’s people but they were not good leaders. They did not like it that people listened to Jesus instead of them. They hated Jesus. They hated him so much that they wanted to kill him. Judas went to these Jewish leaders to make a plan to hurt Jesus. They decided they would arrest Jesus and make him stop preaching about God. The Jewish leaders told Judas they would pay him thirty pieces of silver if he would help them find Jesus.

Judas ate the Passover Meal with Jesus and the other disciples. Before the meal was over Judas left to go tell the Jewish leaders where Jesus was.

Jesus knows what will happen even before it happens. He knew that he was going to die soon. He knew that Judas was going to betray him. He also knew that the other disciples would not help him either. All these things would happen because Jesus had to die on the cross. If Jesus did not die on the cross then he could not save people from their sins. Jesus decided that he needed to pray to God to help him have courage. After the meal he would go somewhere quiet where he could pray.

During the meal Jesus told his disciples that he was going to die soon. He also told them that they would all leave them. That made the disciples very sad. They did not believe Jesus.
Peter said, “Not me, Jesus! I will never leave you.”

Jesus looked at Peter and said, “Peter, you will leave me. You will deny me three times before the rooster crows in the morning.”

After this Jesus and the disciples left and went to a place called Gethsemane. Jesus told his disciples to wait while he went ahead to pray. He asked Peter, James and John to come with him.

When they got to a place where they could be alone Jesus told Peter, James and John to wait and stand guard while he prayed by himself. “You should pray too,” Jesus said. “Bad things are going to happen and you will need courage to be good.”

Jesus prayed to God. He asked God to help him do the right thing. He did not want to have to die but he wanted to do it if that is what God wanted him to do.

Jesus went back to his friends. They were not praying like he had told them to. Guess what they were doing instead? They were sleeping. Jesus told them to wake up. Jesus went back and prayed two more times. Each time he came back he found Peter, James and John sleeping. The last time Jesus told them to wake up because a crowd of people were coming with clubs and swords. Guess who was leading the crowd of people? It was Judas. He was bringing the people to arrest Jesus.

“How will we know which man to arrest?” the people in the crowd asked Judas.

In those times students used to kiss their teacher on the cheek when they saw them. “Jesus is my teacher. Just watch,” Judas said. “I will kiss Jesus. Then you will know which one to arrest”

When Judas came to Jesus he kissed him on the cheek. The men with the clubs and swords arrested Jesus and started to take him away. Peter was very upset. He couldn’t believe they were going to arrest Jesus. Jesus had never done anything wrong! Peter pulled out a sword and tried to protect Jesus. He cut off the ear of the servant of one of the Jewish leaders.

Jesus was not happy with Peter. He told Peter to stop fighting. Jesus put his hand on the servant’s ear and the man’s ear was healed. Jesus knew God wanted him to go with these men. So he left. He did not even fight them.

All of the disciples were very frightened. They all ran away so they would not be arrested. Jesus’ friends left him just like Jesus said they would.
top 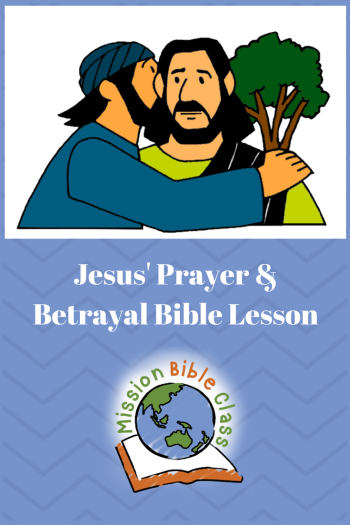