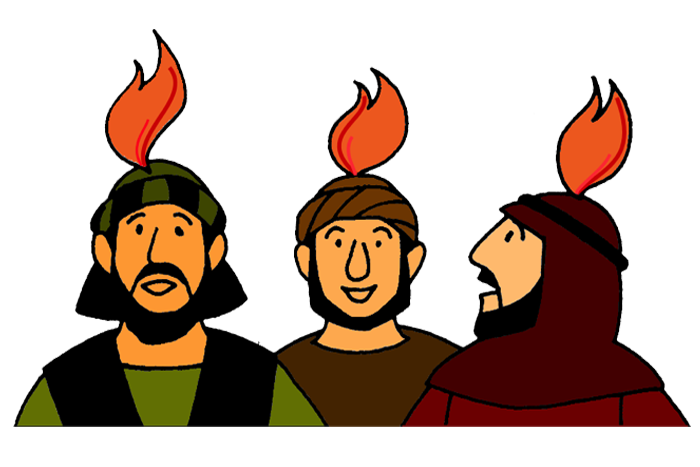 Suggested Emphasis: The church began on the Day of Pentecost.

Memory Verse: “Peter replied, ‘Repent and be baptized, every one of you, in the name of Jesus Christ for the forgiveness of your sins. And you will receive the gift of the Holy Spirit.’” (Acts 2:38)

Before ascending to heaven, Jesus had instructed the apostles to go to Jerusalem and wait for the Holy Spirit. While waiting, the apostles chose Matthias to replace Judas (the apostle who betrayed Jesus and then killed himself). During the Jewish feast of Pentecost, the Holy Spirit came upon the apostles just as Jesus had promised. The Spirit gave these uneducated men the miraculous power to speak in languages that they had never learned or spoken before (speak in tongues). Because of this all of the crowds of Jewish pilgrims from many countries were able to hear about Jesus in their own languages. After Peter preached the first “gospel sermon,” 3000 people were baptized. Emphasise that this was the beginning or “birthday” of the church.

(Acts 1:12-26) Earlier, before he ascended to heaven, Jesus had told the apostles to stay in Jerusalem to wait for the coming of the Holy Spirit (Acts 1:4-5). So after watching Jesus ascend to heaven the apostles along with Jesus’ mother and brothers and some women all gathered together in the upper room of a house in Jerusalem.  Acts 1:15 states that there were about 120 people in all. At Peter’s reminder that they needed a replacement for Judas (who had betrayed Jesus), the others put forth two men: Joseph and Matthias. Both of these fit the requirement of having been, along with the other apostles, together with Jesus since his baptism (1:21-22). The ancient method of casting lots was used to make the choice between the two and Matthias was chosen. Perhaps stones or something similar were used to cast the lots (like tossing a coin or throwing dice) but whatever the items used the process involved an element of chance. By casting lots they believed that God would control the outcome (Proverbs 16:33). After this event the Scriptures do not record decisions being made by this method.

(Acts 2:1-13) Jesus ascended to heaven 40 days after his resurrection (Acts 1:3). The Apostles must have been in Jerusalem for about 10 days because the Day of Pentecost (the New Testament name for the Feast of Weeks) was 50 days after the Passover Sabbath (Leviticus 23:15-21). God chose the perfect day to reveal the Holy Spirit because there were thousands of Jews gathered in Jerusalem from all over the known world. Jesus had described the Spirit as wind before (John 3:8) and the sound of mighty rushing wind from heaven now marked the arrival of the Holy Spirit on this day. The writer of Acts describes what looked like tongues of fire dividing and resting on each of the apostles. The Holy Spirit gave them the ability to instantly speak in other languages and dialects. All of this noise and activity drew a crowd of people. These people were amazed because they could hear the apostles speak in their own language. Some were asking what it meant. Others made fun of them and thought they were drunk.

(Acts 2:14-36) Peter stood up and preached the first “Gospel Sermon”. Before the Spirit had given him special abilities Peter had been a mere fisherman from Galilee. Now he was able to articulately explain how the Old Testament scriptures of Joel were being fulfilled this day. He told how Jesus of Nazareth had been sent by God and that they had crucified him. He pointed out that even the revered King David had looked forward to the coming of the Messiah. All of this but the people had rejected him.

(Acts 2:37-41) The message was clear and scores of people were “cut to the heart” and felt intense remorse. When they asked Peter what they should do he answered “Repent and be baptised, every one of you, in the name of Jesus Christ for the forgiveness of your sins. And you will receive the gift of the Holy Spirit.” (New International Version-NIV). Peter continued explaining the message of Christ and those that accepted him were immediately baptised. The day began with 120 believers but 3,000 were added to their number that day. This was the beginning of the church. It is more than just a group of people who believe in Jesus. The church is the body and Christ is the head (Ephesians 1:22-23). The church is part of the eternal purposes of God (Ephesians 3:10-11). As we continue reading the book of Acts we will learn more about the church and how it grew.

Baptism also took on a new and fuller meaning at Pentecost. It was now at baptism that a person showed true repentance, had their sins washed away (forgiven) by the blood of Jesus Christ and received the gift of the Holy Spirit (Acts 2:38). John the Baptist had baptised people but he preached as the prophets from the Old Testament had and he baptised to demonstrate repentance and forgiveness (Mark 1:4). Baptism now allowed a person to completely relate to Jesus Christ through dying with him (repentance), being buried with him (baptism) and being resurrected (living a Christ-centred life).
Refer to Romans 6:3-8

Peter knew what to tell the people that day because after Jesus was crucified and resurrected he had instructed his disciples. (Matthew 28:18-20, NIV). See The Great Commission and Ascension.

Teach the children the phrase “Jesus loves you” in several different languages. Example: Spanish- “Cristo te ama” French- “Jesus vous aime” German- “Christ liebt dich” You might want to invite someone who speaks another language to come to your class and teach the children. After the children have learned the phrase then explain, “In today’s bible lesson we are going to learn about a time when the apostles wanted to teach people about Jesus. Since these people knew all kinds of different languages, the Holy Spirit gave the apostles a special ability. Even though they had never studied a language, they could speak it perfectly.”
top

After living his life on earth Jesus went back to heaven. Just before he left he told the apostles that they had a very important job to do. They were to go and tell everyone in the world the good news about Jesus’ resurrection (his coming back to life). They were to baptise them and teach them how to be followers of Jesus.

The eleven apostles and other disciples went to Jerusalem just like Jesus had told them to do. Jesus’ mother and brothers and some other women joined the apostles to pray and wait in an upstairs room.

Soon they realised that there were only eleven apostles now instead of the original twelve. Judas was missing.

The other apostles remembered the sad way that Judas had betrayed Jesus when Jesus was still on earth. He had said he was Jesus’ friend but he did not act like a friend. Judas betrayed Jesus and made a deal with some leaders who wanted to hurt him. After the soldiers took Jesus away and crucified him Judas was so ashamed and guilty. But instead of doing the right thing and asking for forgiveness he did the wrong thing and killed himself instead.

Peter said, “The new apostle must be someone who has been with us from the beginning. He should have known Jesus really well and should have been following since the time Jesus was baptised.” Two men, Joseph called Barsabbas (also known as Justus) and Matthias were put forward.

The apostles prayed that God would show them the right choice and then cast lots (sort of like tossing a coin). In this way Matthias was chosen to be the new 12th apostle.

After this the apostles continued to wait for the special helper that Jesus had said would come. The apostles must have wondered how they would actually know when the helper had arrived.

The group waited forty days in all. And then a very strong wind began to blow. After the wind the apostles saw flames come down and sit above their heads. The time had come! The helper, the Holy Spirit, had arrived.
Pentecost was a special holiday and thousands of Jews had come from many other countries to worship at the temple. They came from other countries so they spoke different languages.

When they heard all of the noise they rushed over to see what was happening. The apostles went outside into the temple area where many people were gathered.

Remember how Jesus said that the Holy Spirit would help the apostles tell the good news? That is exactly what happened. The apostles began speaking in all kinds of different languages and the people from other countries could understand. This was amazing because, before that day, the apostles had never studied or learned those languages. Being able to speak in another language that you have never learned or studied is called “speaking in tongues”.

Peter explained that the Holy Spirit was from God and was making all of these amazing things happen. He told them the good news about Jesus Christ. He told them that God sent his son to earth but that the people crucified him. He told them how Jesus was resurrected and then went back to heaven to reign as King.

Many of the people felt very sad and sorry that they had not believed Jesus. They asked Peter, “What should we do?”

Peter answered them in just the way Jesus had told him to, “Repent and be baptised, every one of you, in the name of Jesus Christ for the forgiveness of your sins. And you will receive the gift of the Holy Spirit.”

About 3,000 people were baptised that day and added to the number of believers. This was the beginning of the church. In fact, you could call this the birthday of the church! If you read the bible book of Acts then you will learn about some of the exciting things that happened to the church in the years to come.

Click here to download the slideshow or the printable illustrations .
Be selective.  Each teacher is unique so only use the illustrations that best relate to the way YOU are telling the story in THIS lesson. Too many illustrations can be confusing so eliminate any that cover other stories or details you do not wish to emphasise in this lesson.
top 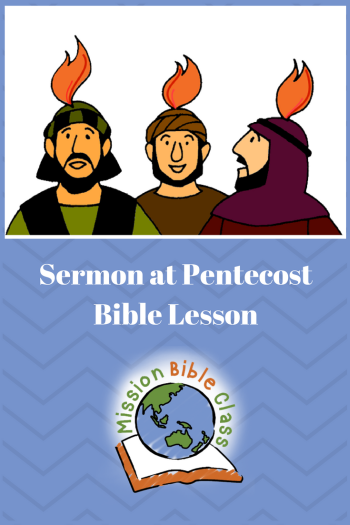