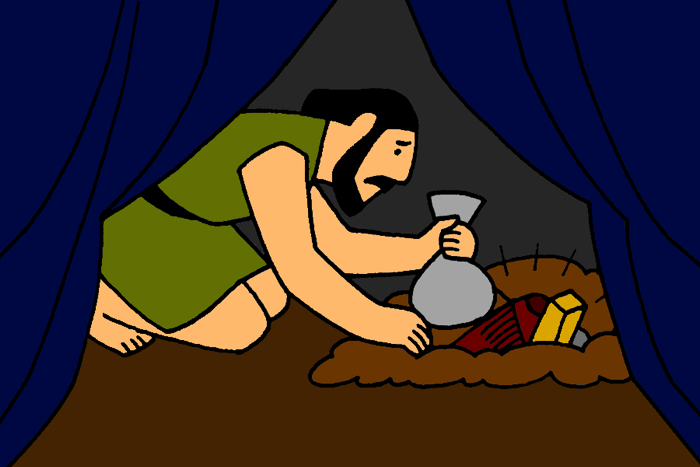 Suggested Emphasis: We cannot hide our sin from God.

Because Joshua believed the Lord would help the Israelites win another battle, he led the people in attacking the city of Ai. Israel lost miserably. The Lord told Joshua that one of the Israelites had taken things for himself during the battle of Jericho instead of devoting it to the Lord. Soldiers found a robe, silver, and gold that a man named Achan had buried and hidden inside his tent. Achan was stoned outside the city. The Lord then told Joshua to attack Ai again. This time the Israelites won the battle. Achan thought he could hide his sin from the Lord but he was wrong.

The first verse in the passage (Joshua 7:1) sums up the whole story. The rest of the passage contains the details of the situation. It is interesting that all of Israel is held accountable for one man’s sin. In modern society we often value individuality to the point that we do not feel responsible, in any way, for our fellow man. God looks at His people individually but also as a group. This becomes very clear in 1 Corinthians 12:12 and following in reference to the Church.

Not realizing that there is sin in the camp, Joshua continues to lead the campaign to claim the land for Israel. Nothing is mentioned about inquiring from the Lord before he makes plans. He sends spies to the city of Ai so he can plan a strategy. Ai would have been about fifteen miles from Jericho. It would have been a steep climb because Ai is at a higher elevation. The spies greatly underestimated the forces needed for battle. They suggested that Joshua only dispatch two or three thousand men to conquer the city. Joshua sends three thousand troops and they are soundly defeated and humiliated.

Joshua’s shock and grief are intense. He does not understand what the Lord is doing. First the seemingly impossible city of Jericho is conquered by marching, trumpets, and shouting and now a seemingly easy-to-conquer city defeats and humiliates the army of Israel.

It is not specifically stated how the guilty person was to be singled out. A process of elimination is used. Perhaps lots were drawn. First the tribe of Judah was singled out. Then it was narrowed down to clan of Zerahites from the tribe of Judah. The Zerahite family of Zimri was then brought forward. Finally, it all came down to a man named Achan.

When Joshua faced him, Achan confessed all. He tells Joshua that he stole a robe, silver, and gold when Israel conquered Jericho. The gold and silver had obvious monetary value. Babylon was a great city and a robe from there would have been considered chic. He had ignored the Lord’s command to devote everything from Jericho to the Lord. When confessing his sin he refers to the items as ‘plunder” (Joshua 7:21) which would imply that it was his right to take them. Perhaps he was trying to excuse his sin. Achan did not just steal from another man, he stole from the Lord. Achan probably thought no one would ever know but the Lord knew. We cannot hide our sin from the Lord (Ecclesiastes 12:13-14).

Achan and his children were stoned and their bodies burned. It seems a harsh punishment to us. But Achan’s sin had caused Israel to lose face before the nations and to lose faith in their cause. He was also responsible for the death of 36 soldiers. Most importantly, he directly defied the Lord’s commands. It certainly points out how serious the Lord is about sin. Since Jewish law prohibited innocent family members from being put to death for the sins of their family members (Deuteronomy 24:16), Achan’s children must have been guilty of assisting him in his sin.

After Achan was reckoned with, the Lord instructed Joshua to take the city of Ai. Jericho had been taken miraculously with no attack. Ai was won through hard fighting and total military commitment from Israel’s army. The Lord does not work the same in every situation.

Hide something in the room and let the children find it. Try to make it challenging. (Or, if you have a “Where’s Waldo” type book, you could also use that and let the children find the hidden pictures.) “In today’s story we are going to learn about someone who tried to hide something. He was not playing a game. He hid something because he had stolen it. He thought no one would ever find it. He even thought that God would never find it! Let’s see what happened.”
top

Do you remember how the Lord helped the Israelites win the battle of Jericho? The Israelites followed God’s instructions and the big walls around the city just fell down and crumbled. The Israelites rushed in and captured the city. Jericho had lots of gold and silver and riches. Joshua told the Israelites that they were not to keep any of the gold or silver or riches for themselves. They were to give it all to God for the tabernacle. Joshua thought that’s what all of the Israelites did.

After the battle of Jericho, Joshua led his people to the next city. The city of Ai (A-eye). Joshua sent spies to see how strong Ai was.

The spies saw how big the city of Ai was but they were not afraid. “Remember how we beat Jericho? The spies said, “We’re so strong, we just need a few men to conquer Ai.”

When the spies told Joshua that only a few soldiers were needed, he sent only a small army of 3000 men to fight the thousands of people in the city of Ai. When the Israelite army attacked the city, the people of Ai fought very hard and beat them. Thirty-six of God’s people died that day.

Joshua was very upset! He tore his clothes and he fell down on the ground. He prayed to the Lord and cried at the same time. “Oh Lord, why have we lost this battle? You helped us win against Jericho but now we have lost to Ai. All of our enemies will laugh at us and try to hurt us.”

“Stand up Joshua,” the Lord said, “you have lost the battle because someone in your army has disobeyed me. Remember how I told the people to put all of the riches from Jericho in the tabernacle? All of those riches were mine. Someone has kept some of the riches for themselves. They have kept them hidden. They have forgotten that I can see everything.”

Even though only one person had sinned, that person was making all of the Israelites suffer. The Lord told Joshua to gather all of the people together. The Lord would show Joshua who had sinned.

Early the next morning, Joshua called all of the people together. He told the people what the Lord said. Nothing can be hidden from God. God knows who had disobeyed Him. No one came forward and admitted that they had sinned so Joshua ordered all of the people to walk before him. Each of the twelve tribes walked before Joshua. When the tribe of Judah came before Joshua the Lord showed that the guilty person was from that tribe. Still no one confessed.

Next, each of the clans (or big families) of the tribe of Judah walked before Joshua. The clan of the Zerahites was chosen. No one came forward to admit they had sinned. They still thought they could hide their sin from God.

All of the Zerahites walked in front of Joshua and the Lord showed that the guilty person was from the family of a man named Zabdi. When no one in the family admitted their sin, finally the Lord revealed that a man from Zabdi’s family was the one who had kept some of the riches of Jericho. That man’s name was Achan.

Achan finally admitted that he had stolen some things from Jericho. He had wanted to keep them for himself instead of putting them in the tabernacle for the Lord. He thought that he could hide the things he stole and that no one would ever find out. He forgot that the Lord sees everything. Nothing can be hidden from the Lord. Achan told Joshua that the things he had stolen were buried inside his tent. Soldiers quickly went to his tent and found a beautiful robe, silver, and gold where he had hidden it.

This was a very serious thing that Achan did. Bad things were happening to all of Israel because of what Achan had done. Because he had stolen from the Lord and had tried to hide it, he was punished. He and those in his family who had helped him hide the riches were taken out of the city and stoned. 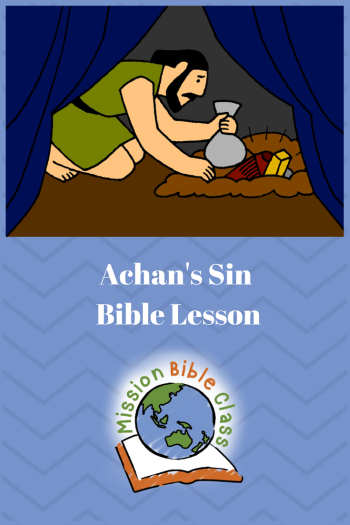