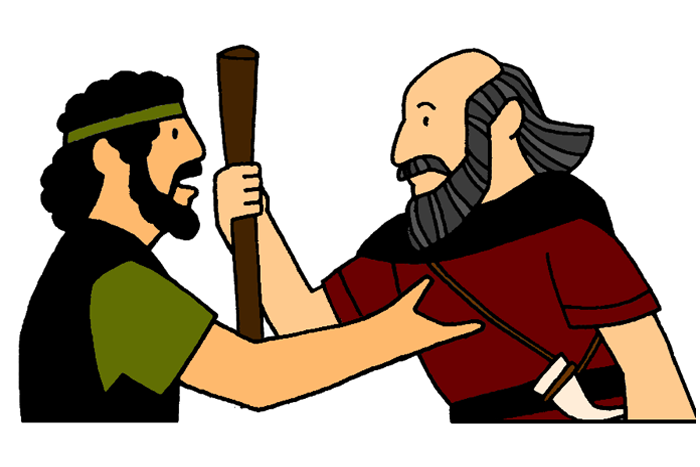 Suggested Emphasis: Moses was the great prophet of the Old Testament (Deuteronomy 34:10-12). He led God’s people out of Egypt, received the Ten Commandments (and the rest of the Law), and wrote the first five books of the bible.

As the time of Moses’ death drew near, the Lord told him to appoint Joshua as the new leader of Israel. Moses appointed Joshua and told him and all of the people to be strong and courageous because the Lord would be with them as they entered the Promised Land. Even at the age of 120, Moses was strong and had excellent vision so the Lord directed him to climb Mount Nebo and view all of Canaan, the Promised Land. After viewing the land, Moses died.

Numbers 27:12-23—The Lord reminds Moses that he will not be allowed to enter the Promised Land. This was because he did not honour the Lord when he struck the rock in Numbers 20:1-13. God always remembers his promises. In this case it was a promise of punishment.

Moses knew how much the Israelites needed leadership. He asked the Lord to appoint a new leader so the people would have one after he died. This section of scripture does not record an actual transfer of leadership. Moses was to be the leader as long as he lived. A new leader was just to be chosen and be ready to take over after Moses’ death. Moses was told to give him some of his authority so that the people will see that he is to be obeyed (Numbers 27:20).

Joshua was chosen by the Lord. The Lord remembered the devotion Joshua had shown when he was one of the twelve spies who spied out the land forty years previously (Numbers 13-14). Ten of the spies did not have faith that the land could be conquered. Only two (Joshua and Caleb) reported that the enemy was strong but that with the Lord on their side, they could conquer the land.

Joshua had worked beside Moses for a long time. He led soldiers in battle under Moses’ orders soon after leaving Egypt (Exodus 17:8-13). He accompanied Moses part way up Mount Sinai when Moses received the Ten Commandments (Exodus 24:12-14). He was with Moses when Moses threw down the tablets of stone upon finding the Israelites worshipping the golden calf (Exodus 32:15-19). Joshua had been Moses’ aid from a young age and he often took up for Moses (Numbers 11:26-30). The people would have been very familiar with Joshua but by laying hands on him, Moses showed all of those present that Joshua would be carrying on his work.

God spoke to Moses face to face (Numbers 12:6-8) but Joshua would be led in a less direct way. He would work closely with the High Priest. The Urim (Numbers 27:18-21) was one of the tools the priest used to cast lots and find out the Lord’s will.

In Deuteronomy 31:1-8 Moses publicly commissions Joshua before the people. He tells them to be strong and courageous. The Lord will go before them.

Deuteronomy 34:1-12—Even though he was 120 years old, Moses had good vision and was strong enough to climb Mount Nebo. The Lord showed him all of the Promised Land before he died. Verses 10-12 sum up the life of a great man of God. Not a perfect man, but indeed, a great man of God. This was Moses, who was born a Hebrew but raised by an Egyptian princess, who heard the voice of the Lord from a burning bush, who was the voice of God to the Pharaoh during the ten plagues, who led the people through the Red Sea, who was the Lord’s instrument in providing water and food in the wilderness, who received the Ten Commandments and the Law, who wrote the first five books of the Old Testament, who led the people to the Promised Land. “Since then, no prophet has risen in Israel like Moses, whom the Lord knew face to face” (Deuteronomy 34:10).

Help the children find the table of contents in a bible. This is a good time to review the fact that there are 39 Old Testament books and 27 New Testament books. 66 in total. Notice the first five books of the Old Testament. Tell older children that this group of five books is known as the “Pentateuch”. These are called the books of Law because they contain the Ten Commandments and other very important laws of God. Younger children could help you count to five as you point to the names. Say them together. “Does anyone know who wrote down the words of the first five books of the bible? Moses did. Moses was a very great man of the bible. He was a leader of God’s people. Moses lived to be a very old man. Today we are going to remember some of the things that Moses did in his life.”
top

Joshua was a good helper to Moses. He had been with Moses ever since God led His people out of Egypt to go to the Promised Land. He had climbed part of the way up Mount Sinai with Moses and had waited for him when God was giving the Ten Commandments. Joshua had been one of the twelve spies that Moses sent into the Land to see what it was like. Joshua always had faith that God would take care of His people.

Moses was now a very old man. He was 120 years old. Even though he was still strong he knew it was time for a new leader. He called all of the people together.

“The Lord wanted us to enter the Promised Land forty years ago but we did not have enough faith. Only Joshua and Caleb believed that the Lord would help us. The time is coming soon to enter the Land. You must all have courage because the Lord will be with you. The Lord has told me that I will not enter the land.”

(Do you remember how Moses did not honour the Lord and obey him? Remember how he hit the rock instead of speaking to it like the Lord said? That is why he would not enter the Promised Land.)

Moses continued to talk to the people, “Now is the time to appoint a new leader. He will be the one to take you into the Promised Land. Joshua will be your new leader.” Moses encouraged Joshua to also have courage and to be a good leader. Moses told the people to always obey the Lord.

After Moses talked to the people, the Lord told him to climb to the top of Mount Nebo. Mount Nebo was very high and Moses could look out and see the Jordan River. He could see the Promised Land on the other side of the river. Many old people cannot see well but Moses had very good eyesight. He must have been very happy to see the land that the Lord had promised for his people. The Lord must have loved him very much to show him the land.

Moses never went inside the Promised Land. After viewing it, he died. The bible says that the Lord buried Moses and no one knew where his grave was. The people were very sad to lose this great leader. They knew that Joshua would be a good leader but they remembered all of the wonderful things that Moses had done. Moses was a great man of God. (Read Deuteronomy 34:10-12 straight from the bible: “Since then, no prophet has risen in Israel like Moses, whom the Lord knew face to face, who did all those miraculous signs and wonders the Lord sent him to do in Egypt—to Pharaoh and to all his officials and to his whole land. For no one has ever shown the mighty power or performed the awesome deeds that Moses did in the sight of all Israel.”
top 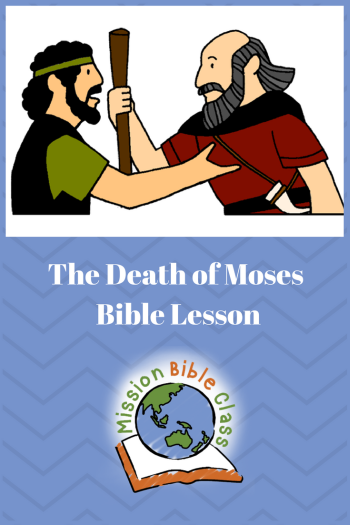