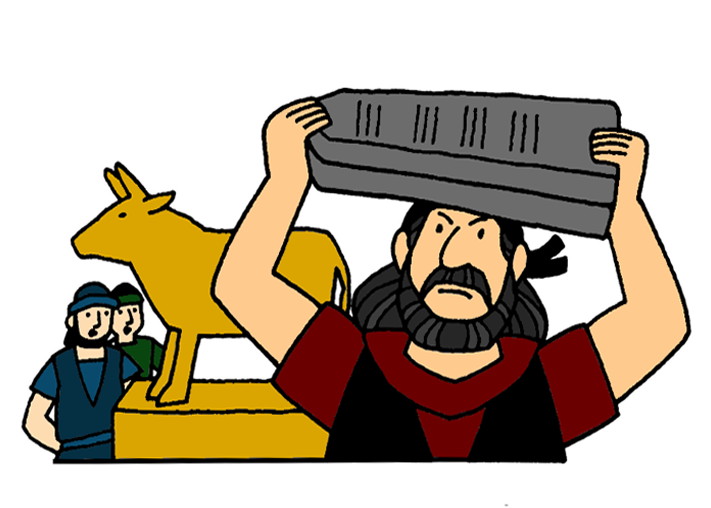 Suggested Emphasis:Obedience means doing things God’s way and not our own.

After receiving the Ten Commandments, Moses returned to Mount Sinai and spent a further forty days. God revealed more detailed laws and inscribed the commandments on stone tablets. The people, meanwhile, became anxious that Moses was gone so long. Ignoring the commandments about worshiping the Lord God only, they begged Aaron to make gods for them. He collected their gold jewellery and made a golden calf. When Moses came down from the mountain he found the whole camp partying around the idol. God wanted to destroy the people but Moses begged for mercy. Moses threw down the stone tablets and broke them. He ground up the golden calf and put the powder into the drinking water and had the people drink it. He rebuked Aaron and he had 3000 of the idolaters executed.

Although the giving of The Ten Commandments is covered in another lesson the events covered in this lesson actually happened simultaneously.  The serious nature of the people’s disobedience in these verses relates to their blatant disregard for the covenant God has just made with them.  His part of the covenant was to protect and bless them and their part was to obey.  Moses went back and forth up and down Mount Sinai a number of times in answer to God’s call.  The mountain shook and the people were witnesses to smoke and thunder and lightening.  They even clearly stated their intention before the Lord.  There was no excuse for their change of hearts.

“So Moses went back and summoned the elders of the people and set before them all the words the Lord had commanded him to speak. The people all responded together, ‘We will do everything the Lord has said.’ So Moses brought their answer back to the Lord.”  Exodus 19:7-8 (NIV)

(Exodus 32:1-6) At the very same time that Moses was up on the mountain with God everything was going terribly wrong at the base of the mountain.  Swayed by the people pointing out that Moses had been gone too long, Aaron, himself, gave into their requests and collected their gold jewelry to make an idol for them to bow before.  Although he speaks of having a festival to the Lord (Exodus 32:5-6) he pollutes everything about true worship with sacrifices and offerings before the calf idol as well as all kinds of revelry.

(Exodus 32:7-14) All of this is in stark contrast to the loyalty and devotion God is instructing Moses with on the mountain. Although Moses (and Joshua, who seems to be waiting further down the mountain) are unaware God knows exactly what is happening.  The love Moses has for his people is evident in the way he faces God’s wrath on their behalf.  God is ready to destroy his people and start over with Moses but Moses unselfishly and bravely reminds him of his promises and how far they have come.

(Exodus 32:15-33:6) When confronted by his brother, Moses, Aaron passes the blame on to the people.  Many years before when the Lord Spoke to Moses from a Burning Bush Moses expressed feeling inadequate for the task of speaking and leading the people.  God told him that his seemingly eloquent brother Aaron would help him.  Now, when comparing the leadership of Aaron and Moses it is apparent why God had chosen Moses in the first place.

Even as Moses confronts Aaron and throws down and shatters the tablets of stone the people continue in their revelry.  Moses had just witnessed the wrath of God so it is no wonder that the punishment meted out to the people was extreme, harsh and swift and about 3,000 Israelites were put to the sword that day.  Moses seems determined to cleanse the group of sin and be the people God has just revealed that they can and should be.  As the people moved on from the camp and continued on their journey God tells Moses that an angel will go before them but he (God) will not go with his people (33:2-3).

(Exodus 33:7-chapter 34) God was angry with his people but he continued to meet with Moses.  Moses spoke up for his people and eventually the Lord relented and accompanied his people.  God invited Moses back up the mountain to repeat his covenant and produce the tablets of stone once again.  It was evident to all that Moses had been in God’s presence because his face glowed so much that he had to wear a veil in front of the people.

Bring two instant pudding packets and ingredients to class today (or some other simple recipe). Have one of the students read the instructions (or you read them aloud if you have non-readers) as you follow the instructions. The first time you make the pudding follow the recipe exactly and set the mix aside. The second time you make it tell the class that you are going to do it “your way”. Put in some silly ingredients that you know will now work (soft drink instead of milk for instance). Now compare the two results. “Children, the people who made this packet of mix knew the proper ingredients to use. When I did it their way I made some very nice pudding. The one where I did it my way did not turn out very well, did it? God knows how we should behave. He knows the best way. When we follow the bible and do what it says then we are doing things God’s way. Everything will be fine. If we don’t obey God and just do things the way we want to do them then our lives will be like this pudding. It will not be a good life! The children of Israel knew what the Ten Commandments were. They knew they should do things God’s way but they chose to try things their own way.”
top

After Moses told the people all of the Commandments that God had given them, he went back up onto the mountain to hear more instructions from the Lord. While Moses listened, the Lord wrote the Ten Commandments on tablets of stone.

For weeks Moses had been away from his people. Soon they began to wonder where he was. They knew Moses had gone up on the mountain to talk to God but why had he been gone so long? Maybe he would never come down!

“Why should we worry about him? Let’s make a god we can see to worship,” the people began to say. “That’s what the Egyptians did. Let’s get Aaron to make us a god!”

Aaron believed in the Lord but he thought he could change God’s commands. He thought the people could worship God by using an idol. Aaron told the people to bring their gold earrings to him. Aaron made a gold idol in the shape of a calf. This was one of the kinds of idols they remembered from Egypt. Then Aaron built an altar and said that the next day there would be a festival to the Lord.

Aaron and the people were disobeying God. The second commandment was that they should not make any idols. Even though they said that they were worshipping God, they were not doing it God’s way! They were trying to worship God the way they wanted to. It did not matter to them what God wanted.

Even though the Lord was speaking to Moses way up on the mountain, He knew exactly what the people were doing down below. The Lord was angry and told Moses that He wanted to destroy the people.

“Oh, Lord, please forgive your people!” Moses begged. Finally God told Moses to go down to the people. He would not destroy them.

When Moses arrived in the camp he found the people partying around the idol. Moses was so angry that he threw down the stone tablets and broke them. He was very disappointed in the people. He was the leader and he knew that they must be punished. He ground up the golden calf and put the powder into the drinking water and made the people drink it.

He told Aaron that he was very wrong and that he had disobeyed God. Even then, many of the people still chose to continue their wild party instead of listening to the words of the Lord. There was nothing that would stop them.  Moses gathered men with swords and about 3,000 people were put to death that day.

Many of the people were very sorry. They knew that they had not obeyed God. They had tried to do things their own way instead of God’s way. After this, those who had disobeyed were punished by God. They got sick with a plague.

Obeying God is very important.  As time passed God called Moses back up to the mountain.  He wrote on more tablets of stone and told Moses that he would keep his covenant with his people.  When Moses came down from the mountain this time something was different.  Because Moses  had stood in the presence of God his face actually glowed.  In fact, every time he spent time in God’s presence after this his face  glowed again.  At these times he had to wear a veil over his face.
top 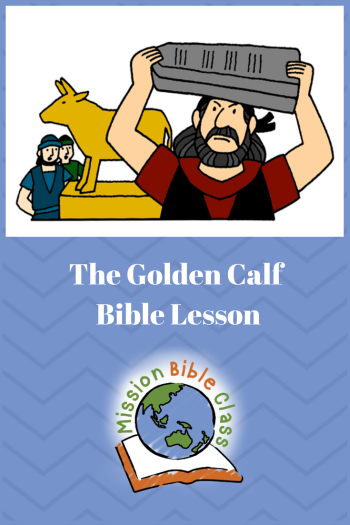