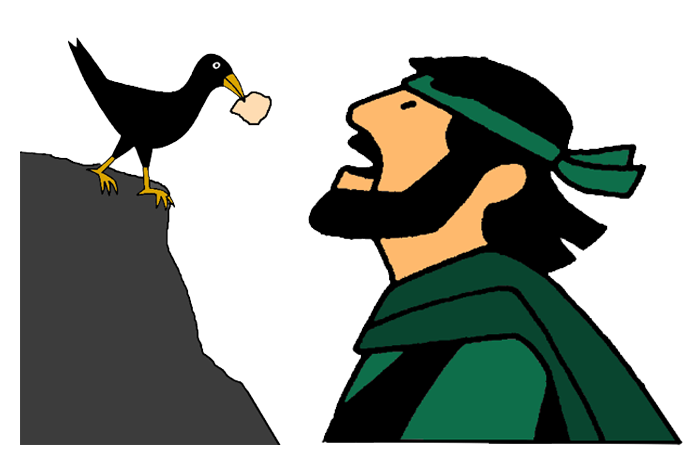 Suggested Emphasis: The Lord will provide for our needs.

God sent the prophet, Elijah, to tell King Ahab (7th king of Israel) that a terrible drought would come upon Israel because of his disobedience. Ahab’s evil wife, Jezebel, was so angry that she started having prophets of the Lord hunted down and killed. The Lord sent Elijah into hiding by a brook of water. The Lord kept Elijah safe. Twice each day the Lord had bread and meat delivered to Elijah by unusual means – ravens. When the brook dried up, the Lord sent Elijah to the home of a poor widow. Miraculously, during the time Elijah stayed at the home of the widow, she never ran out of flour or oil to make bread. When the widow’s son died, Elijah raised him from the dead. The Lord took care of Elijah.

Many years have passed since the nation of God divided into two separate kingdoms – Israel and Judah. Over the years Judah went on to be ruled by both good and bad kings. Israel, on the other hand, only ever had bad kings.

Israel’s religious decline went on for its entire history. During these times, prophets of God were abundant. They travelled among the people of Israel and Judah declaring the word of the Lord. They prophesied of the rise and fall of kings in both kingdoms. Preaching the plain truth of God could be very dangerous. Disobedient kings did not want to hear about God’s judgement on them. The prophets were often in mortal danger.
Background information on the Divided Kingdom.

At the time of this week’s story, Ahab was the king of Israel. He worshipped false gods and married an evil foreigner named Jezebel. He even built altars and places of worship to Baal and other gods. Jezebel tried to kill off the prophets of the Lord (1 Kings 18:4).

The prophet, Elijah, was from a small town in Gilead located on the eastern side of the Jordan River. God sent Elijah to King Ahab to warn him that Israel was going to experience a terrible drought. This would happen because Ahab and Jezebel did not obey God. Israel is a hot, dry country during the summer months. The people rely on the rains during the winter and spring in order to get them through these dry months. If no rain came for even one year, they would not be able to raise crops. Not even grass would grow in the open fields for the cattle to eat. In this case, the drought went on for three and a half years. The rivers would be nothing but dry earth. People, as well as crops and cattle, would die from lack of food and water. A drought in this area of the world would bring massive famine to the people.

The drought came just as Elijah had prophesied. God knew that Ahab would try to blame everything on Elijah so He sent Elijah to a safe place. The brook of Kerith is believed to be located within the territory of Gilead on the eastern side of the Jordan River. Here Elijah had plenty of water. He probably lived in a cave near the brook. Since it was best that no one know where Elijah was, God even provided the food for him to eat. Ravens brought food twice a day for Elijah. The Lord protected Elijah from both the famine and Ahab’s anger.

When the brook dried up, the Lord sent Elijah to the home of a widow in Zarephath of Sidon (right in the middle of the area where Jezebel was from!) The widow and her son had been affected by the severe drought. They had just enough flour and oil to make one last loaf of bread. The woman agreed to hide Elijah and, because of the power of the Lord, the supply of flour and oil never ran out. The woman was happy that Elijah was there because her son became ill and died and Elijah raised him from the dead.

All of God’s people used to be one country. They had had kings like Saul, David and Solomon. Now they were divided into two countries. One country was called Israel and the other Judah.

Ahab was the king of Israel and he did not obey God. He married a very bad woman named Jezebel. King Ahab and Queen Jezebel made idols to false gods and then worshipped them. They wanted everyone in the country to worship the idols.

There was a man in Israel who did not like the things that King Ahab and Queen Jezebel did. He did not worship idols. This man’s name was Elijah and he only worshipped the one true God.

Elijah was a prophet of God. A prophet is someone who has a special message from God. God would tell Elijah things and Elijah would go and tell the people. Sometimes people liked what Elijah said and they thanked him for bringing the good messages from God. Sometimes the people did not like the message. Some people did not want to be told they were wrong.

God had a special message for Elijah. He told Elijah to take the message to the King and Queen. God told Elijah to tell them that He was very angry with them because they worshipped idols. Because they kept doing these things then the Lord would send a terrible drought. That would mean that there would be no rain for a long time.

But God took care of Elijah. He made sure no one would find him. He told Elijah to go to a special place and to stay there. Even though the rest of the country was dry from the drought, Elijah was safe and always had enough water from a brook. The Lord also made sure Elijah had plenty to eat. Every morning and every evening ravens would fly in and bring Elijah bread and meat to eat.

After a while, the brook dried up and God told Elijah to go to the city of Zarephath. When Elijah travelled he must have noticed how dry everything was. Elijah wondered what he would find in Zarephath.

When Elijah got to the city he found a woman and her son collecting sticks. He asked the woman for a drink of water and she said that she would get some. Then Elijah asked the woman if she would also bring him a little bread. The woman was very sad. She was very poor. She said that she only had enough oil and flour to make one last meal for herself and her son. After that, they would not have anything to eat and they would die.

Elijah told the woman not to worry. She should go ahead and make some bread for Elijah. God would make sure that she still had enough for herself and her son.

Elijah had a special message from the Lord, “As long as the drought lasts, you will always have enough oil and flour to make bread for me and for your family.”

As time went by the woman’s son became sick and died. She brought the boy to Elijah and asked him to help her.

Elijah carried the boy upstairs to the room where he was staying. He prayed to the Lord to help the boy. Another miracle happened. The Lord made the little boy alive again! Elijah carried him back to his mother and told her how the Lord raised him from the dead.

The woman was very happy! “Now I know that you are a true prophet of God. I know that the Lord is the only true God!”

Elijah continued to stay at the woman’s house for a long time. Even though other people were hungry and the land was dry, God made sure that his prophet, Elijah, was safe. God took care of Elijah.
top 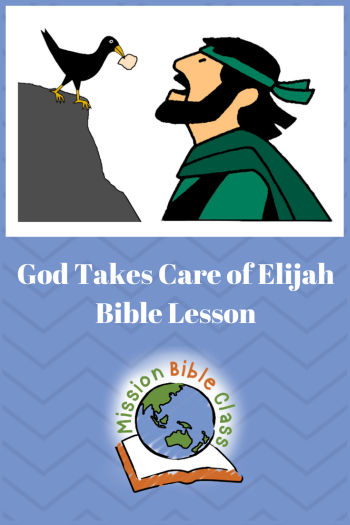