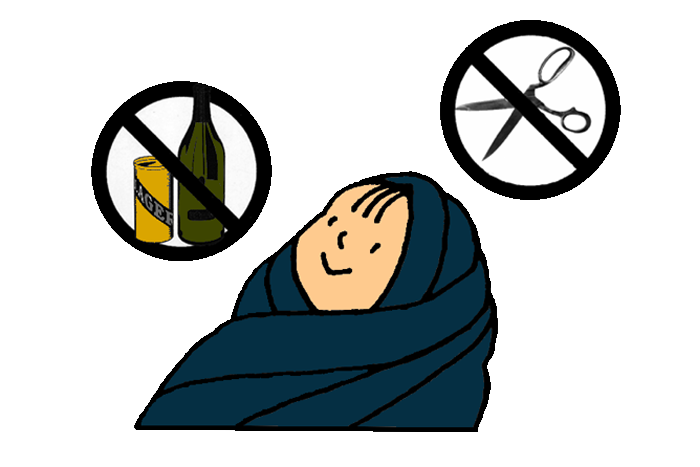 Suggested Emphasis: We should make promises carefully and then we should keep our promises.

The Israelites drifted away from the Lord again and now the Philistines began to harass and hurt them. The Lord blessed a childless couple with the birth of a son named Samson. The Lord told Samson’s parents that Samson was to live by a vow (promise) to never cut his hair or drink any alcohol. He would be a Judge of Israel and have special strength from God. Samson kept the vow and, as he grew up, his strength became well-known throughout the land.

Refer to information about the time of the judges. As soon as Gideon was dead, the Israelites once again drifted away from God. They turned to idols (Judges 8:33-35). The same cycle of the time of the Judges, continued once again. This time, Samson would be the Judge. In the years between Gideon and Samson, three other Judges came and went. They were Tola, Jair, and Jephthah. These Judges, like Samson, acted on behalf of smaller parts of Israel.

The Philistines did not present the Israelites with as acute a challenge as did other peoples, such as the Canaanites and Midianites but they presented a more chronic challenge. It was not until the reign of David that the Philistines were put down for good. The Philistines are believed to have been part of a group called the Sea Peoples. They probably were immigrants from islands in the northern Mediterranean. They occupied the coastal plain of south-western Israel, taking over land that had been allocated to the Israelite tribes of Dan and Judah. In fact, the Danites (those from the tribe of Dan) suffered so badly from the Philistines that most of the survivors moved far to the north. The Philistines were using the nonviolent means of trade and intermarriage to gain control over the Israelites. Consequently, many Israelites were not keen on antagonizing them.

One Danite who stayed in Canaan was Manoah. He and his wife were not able to have children. An angel came to Manoah’s wife and promised that she would have a son. The angel told the woman that she must make a special promise. She was to raise her son by the Nazarite Vow (Numbers 6:1-21). “Nazarite” means one specially dedicated to God’s service. One so dedicated would not cut his hair, would eat only food approved by God’s law, would never touch a dead body, and would not use alcohol. In this case, even the baby’s mother was to be dedicated in this way. The angel said her son would begin to rescue his people from the Philistines.

The angel appeared again and spoke to Manoah. He explained everything to Manoah. This was very important because the Nazarite Vow would be very difficult to keep. This was a very important promise that Manoah and his wife were making. They would have to also teach their son how to keep the vow (promise). After Manoah made a sacrifice to the Lord, the angel disappeared up into the flames above the altar (Judges 13:19-23).

Manoah and his wife raised their son according to the Nazarite Vow. As he grew, Samson developed his own personality – and it was quite a personality. He seemed to travel around showing off his strength. Samson was not a leader in the sense that he was a godly man to follow. He was a hero-Judge. He brought pride back to the Israelite people by antagonizing the Philistines.

In chapter 14 the strong-willed Samson married a Philistine girl. He tried to fool everyone at the wedding feast with a riddle but his new wife begged him until he told her the answer. She told the other Philistines. In his anger, Samson struck down 30 men. His wife was given to someone else. Later, when he found out that his wife was given to another, he caught 300 foxes and tied pairs of them together by their tails. He set the tails on fire and let them run through the Philistine grain fields, olive groves, and vineyards.

The violence continued (15:1-16:3). The Philistines killed Samson’s wife and tried to capture him. They tied him up but he saw a dried jawbone of a donkey and used it to kill 1000 Philistines. Later Samson visited yet another Philistine woman and the Philistines tried to trap him inside the city. He pushed the city gates down and carried them away.

This strong hero had a very big weakness – women.

For more about Samson see: Samson and Delilah and The Death of Samson

A good woman, who was married to an Israelite man named Manoah, was all by herself one day. She was thinking, “I wish I had children. I have prayed and prayed to God but He still hasn’t given me a baby.”

An angel of the Lord came to talk to her. “I know you have waited for a long time to have a baby. God has heard your prayers and you will soon have a son.” A baby! The lady was so excited she ran to tell her husband.

Manoah said, “That’s wonderful. God is good! But I hope the angel comes back and tells us how to raise the child.” The angel did and told them their son would be special. Manoah and his wife were to keep a special promise. This promise was called the Nazarite Vow. They must promise that the baby was to never ever cut his hair or touch a dead body or drink any alcohol. Even Manoah’s wife could not do these things when she was pregnant with the baby. They must never break the promise!

When their son was born, Manoah and his wife called him Samson. They taught Samson that he must always keep the Nazarite Vow – the promise. He must never cut his hair or drink alcohol. Samson grew up to be a strong man. Once he killed a lion with his bare hands. Israel was very proud of Samson because they knew that the Lord gave him strength.

Many days later, Samson saw the skeleton of the lion that he had killed. He noticed that bees had built a hive in the bones. Samson took some of the honeycomb and ate it. It was delicious. He even gave some to his parents to eat. They liked it too.

The Philistines had tricked Samson. The strength of the Lord came to him and he killed 30 Philistines. Later, he caught 300 foxes. He tied pairs of foxes together by their tails and then lit the tails on fire. He let the foxes go into the grain fields and vineyards of the Philistines. All of the fields caught on fire and the crops were destroyed.

The Philistines killed Samson’s wife and then tried to capture him. Samson saw an old bone from the jaw of a dead donkey. He was so strong that he was able to kill 1000 Philistines with it.

Another time, the Philistines tried to capture Samson again by trapping him inside a city. They shut the city gates with him inside. The strength of the Lord came to Samson again and he just picked up the gates and carried them away to the top of a hill.

Even though Samson was not always good, the Lord gave him strength. The Lord wanted the Philistines to know that the Israelites were His people. He wanted them to know that God is strong and He can give strength to His people. Samson kept his promise. He never cut his hair or drank any alcohol.
top

This story can be told using a variety of methods.  Always remain true to the facts found in the Bible but help children connect to its meaning by using drama, visual aids, voice inflection, student interaction and/or emotion.
Click here for visual aids and story-telling methods.
Be selective. Each teacher is unique so only use the illustrations that best relate to the way YOU are telling the story in THIS lesson. Too many illustrations can be confusing so eliminate any that cover other stories or details you do not wish to emphasise in this lesson.

Be selective. Consider the age and attention level of the children you are teaching and only select illustrations that are helpful Each teacher is unique so only use the illustrations that best relate to the way YOU are telling the story in THIS lesson. Too many illustrations can be confusing so eliminate any that cover other stories or details you do not wish to emphasise in this lesson. 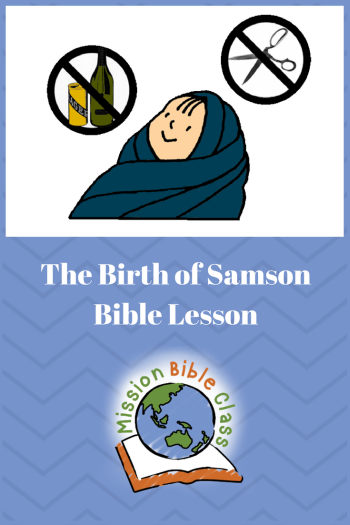