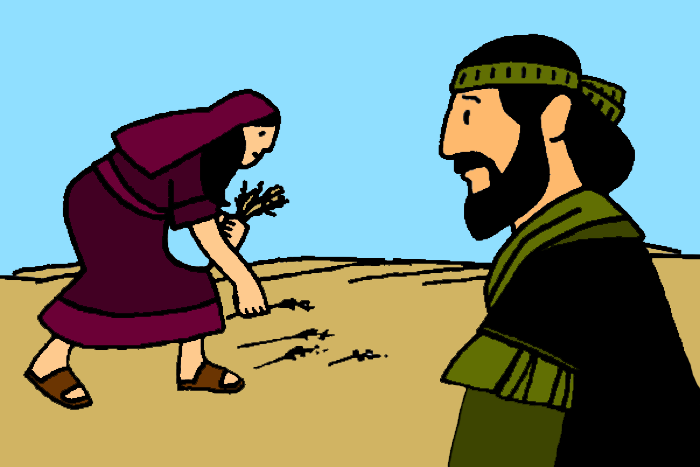 Suggested Emphasis: God continues to love us even as our family and home situations change.

Boaz was the owner of the field where Ruth gathered grain. He was also a relative of Naomi’s late husband. When Boaz took notice of Ruth and treated her with kindness, Naomi knew that he would be a good husband for Ruth. She instructed Ruth to follow the wish custom of lying at the foot of Boaz’ bed to show that she wished him to marry her. Boaz also followed tradition by gaining the permission of another relative of Naomi’s that had the right to marry her. Boaz and Ruth married and when they had a son, Naomi took care of him like her own grandchild.

Refer to information about the time of the judges. Ruth went to work in the barley fields to support her mother-in-law, Naomi. It was the custom of the day for poor people to “glean the fields”, that is, to pick up any of the grain left behind by the harvesters. While Ruth was gathering the leftover grain, she came to the attention of Boaz, the owner of the field.

The name Boaz probably referred to quickness or strength. He was a man of great wealth. But besides referring to monetary strength, the Hebrew name probably meant that he was gifted in other ways. Boaz was generous to Ruth in offering grain and water, for he had heard about Ruth’s goodness to her mother-in-law.

Naomi recognized Boaz as a relative of hers. She could see that Boaz would be a good husband for Ruth. Naomi considered Ruth as her daughter. The law of God said that when a young woman became a widow, the man who was the nearest relative of her dead husband should marry the widow and should buy back any land that had belonged to her. In this way God provided that the land would always be kept in the same family.

Naomi instructed Ruth in the customs of the day. After the harvest celebrations, all of the workers slept near the grain so that no one would steal it. Ruth waited until everyone was asleep and then lay down at Boaz’ feet. When he woke up at midnight he found Ruth at his feet. In the culture of the time, Ruth was showing Boaz that she wanted to marry him.

Boaz was an older man and was flattered that Ruth had chosen him. First he had to check with a nearer relative of Naomi’s who had a greater legal right to marry Ruth.

Under Old Testament law, a near relative was allowed to buy back, or redeem, property that had belonged to family members. Boaz offered this option to the other relative first. One big thing in Boaz’ favour was that he was wealthy. The other relative would have had to buy all of Naomi’s property to be in a position to marry Ruth.

The relative gave up his right and let Boaz be the “kinsman redeemer.” To show that this was legal, the relative followed custom and removed one of his sandals and gave it to Boaz.

Acting as a kinsman-redeemer, Boaz acquired the property that had belonged to Elimelech and his two sons (Ruth 4:9-10). In addition, he acquired Ruth to be his wife.

The marriage was blessed with the birth of a son, Obed. Obed is a shortened form of the name Obadiah, which means “servant of the Lord.” The name was a fitting choice, for Obed grew up to become the father of Jesse and the grandfather of David.

Write the word “family” on the chalk/whiteboard. Let the children list the members of a family. The traditional two parents and children will probably be mentioned but don’t be surprised with grandparents, uncles, solo parents, step-parents, or mum’s boyfriend. Children grow up in all sorts of families. They almost never have a choice in the situation. Children need to know that the Lord loves and takes care of his children. Whether children come from a non-traditional family or they know someone who does, they need to know that the Lord loves the members of that family and wants them to learn to love him. “Ruth knew what it was like to live in a family that was different. She was a widow and she lived with her mother-in-law. Let’s find out how God loved and took care of Ruth.”
top

Ruth was not from the land of Judah. She had moved there with Naomi. Ruth was from the land of Moab. Ruth was a woman who worked very hard in the barley fields of Bethlehem. She gathered grain all day. The owner of the field was called Boaz. Boaz was kind to Ruth and made sure that all of the workers treated her nicely.

Every day Ruth brought all of the grain home to her mother-in-law, Naomi. Ruth and Naomi would grind the grain into flour and then use it to make barley bread.

Naomi and Ruth were both widows. Naomi’s husband had died many years before. Ruth used to be married to Naomi’s son but Naomi’s son died. Now Ruth treated Naomi like a mother and Naomi treated Ruth like a daughter. Even though they had an unusual kind of family, the Lord loved them and always took care of them.

One day Naomi had a good idea. “Boaz has been so kind to you, Ruth. I think he would be a good husband. You do not know the customs of our country so I would be happy to tell you what to do if you would like me to.”

Ruth did want to marry Boaz. He was older than her but he was a kind man. She wanted Naomi to help her.

Naomi told Ruth to go to the fields where all of the barley was being harvested. Boaz would be sleeping near the grain to guard it. Ruth was to quietly watch until she saw Boaz go to sleep for the night. After he was asleep, Ruth was to go and lay down at Boaz’ feet.

“Don’t worry, Ruth,” said Naomi. “In our country that is a way for a woman to tell a man that she wants to marry him. Boaz will understand and he will tell you what to do.

Ruth did just as Naomi told her. That night, when Boaz was asleep, she laid down near his feet. At midnight, something woke Boaz up from his sleep. He looked down and saw Ruth. Boaz was very happy that Ruth wanted to marry him.

“I would like to marry you too, Ruth,” said Boaz. But first we must follow the custom of my country. I am Naomi’s relative so I can marry you. I will have to buy back all of the lands that Naomi’s husband used to own. There is one other relative who is closer to Naomi. If he chooses to buy back the lands and marry you then he has the first choice. I must go to him and ask him. That is the law and custom of our country.”

The very next day Boaz went to the city gates to speak to the other relative. He said that he wanted to buy back all of Naomi’s husband’s lands. That would mean that he would be called the “kinsman redeemer”. This would cost a lot of money.

The other relative thought very carefully. He did not want to buy all of the lands. He did not want to marry Ruth, either. “Boaz, I will give up my right to be the ‘kinsman redeemer’. I will follow our custom and give you my sandal. Then everyone will know that I am letting you be the ‘kinsman redeemer’. You can buy Naomi’s lands and you can marry Ruth.”

Boaz was very happy. He bought back all of Naomi’s lands and told her that he would always take care of her and Ruth. Boaz married Ruth.

Later Ruth had a baby boy. She and Boaz called him Obed. Naomi loved Obed and helped take care of him. Now Ruth and Naomi’s family was different. Now there was a father and mother, a baby, and a grandmother. God still loved them and took care of them.

Be selective. Each teacher is unique so only use the illustrations that best relate to the way YOU are telling the story in THIS lesson. Too many illustrations can be confusing so eliminate any that cover other stories or details you do not wish to emphasise in this lesson.

Note: Also see the Ruth and Naomi Story on this site. Some of these resources relate to both stories. 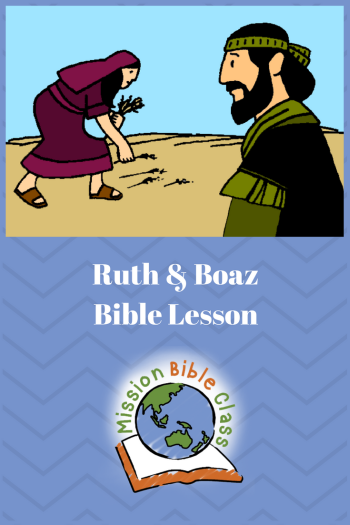