Daniel and the Lions 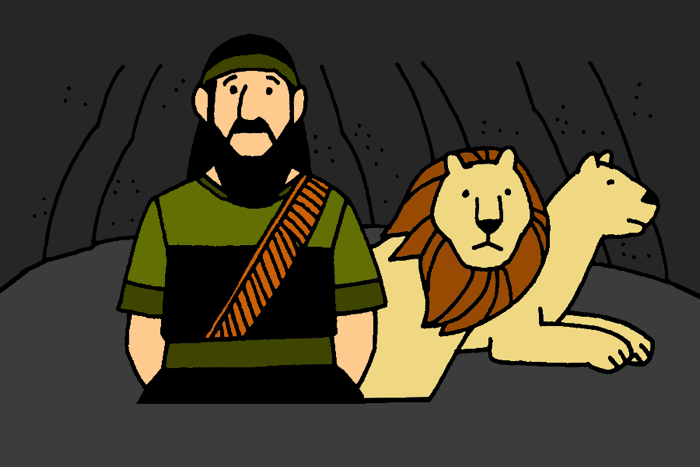 Suggested Emphasis: When doing work for someone be hardworking, honest and trustworthy.

Memory Verse: “Whatever you do, work at it with all your heart, as working for the Lord, not for human masters” Colossians 3:23, NIV

The Medo-Persian Empire conquered Babylon. Darius was the new king of Babylon. When he saw that Daniel had served Babylon well, he appointed him to be a government official for Medo-Persia. Soon he was considering putting Daniel in charge of the whole government. Other jealous officials plotted against Daniel and put Darius in a position where he was forced to have Daniel thrown to the lions. God saved Daniel from the lions and caused Darius to show respect toward the Lord.

Although many visual aids depict Daniel as a young man when he was in the lion’s den, he was actually an older man. Sixty-six years had passed since Daniel was a young man in King Nebuchadnezzar’s court.

When the Medes and Persians conquered Babylon (the night of the handwriting on the wall) a lot of things changed for the Jews. The new emperor was Cyrus. Cyrus’ policy was to let some of the Jews return to Jerusalem. This fulfilled God’s promise that the Jews would return to their land after 70 years of captivity.

Many Jews returned to Jerusalem but some, like Daniel, decided to stay in Babylon. Daniel was a well-respected elderly statesman. He had served Nebuchadnezzar and his descendants. Now he was given a place in the new Medo-Persian government.

Cyrus was emperor but Darius served under him as king of Babylon. Darius saw that Daniel was intelligent and well-respected so he gave him an official title and job as one of the three administrators over the 120 satraps that oversaw the country. His work so impressed the king that he was considering appointing him as head of the government. This made the other officials jealous. They searched for ways to ruin Daniel’s reputation before the king.

Daniel not only had a good reputation – he lived up to it. His enemies could not find anything to criticise him for. Since they could not find any fault, they focussed on something else – Daniel’s faith. Daniel had been faithful to the Lord his whole life. Using the legal system to catch Daniel seemed logical. If they could make his faith illegal, he would surely be a lawbreaker and make the king angry.

A group of administrators and satraps flattered King Darius by suggesting that everybody in the land of Babylon must bring their requests to him alone. Neither man nor god was to be asked for anything for a whole month. The plotters probably had such a law written out, and with a little persuasion, Darius signed it.

Daniel knew about the new law, but he kept on praying to God just as he had always done. His enemies easily caught him in the act. The plotters said Daniel had broken the new law.

The king saw how he had been tricked. He was about to lose his best helper because of his own foolish law. He spent the day looking for some way to evade the law and save Daniel. But there was no way. Under the law of the Medes and Persians, a law once made could not be repealed (verse 15).

The king finally ordered Daniel put into the lions’ den. Knowing Daniel’s devotion to God, Darius hoped that God could and would keep Daniel alive. The official seals were placed on the den’s entrance. It would be a crime to break the kin’s seal. So no one would dare try to rescue Daniel.

Lions disappeared from Palestine around the 14 century AD. Lion hunting was a popular royal sport and some Egyptian pharaohs were even reported to keep some as pets.

After a sleepless night, the king hurried during the early dawn to check on Daniel. Darius went to the lion’s den and called down to Daniel. Without waiting for the stone to be moved away, he shouted his question. Had Daniel’s God saved him?

Daniel was alive! God had chosen this way to let the king know that He was really alive and powerful, and that Daniel belonged to Him.

Darius ordered everyone in the kingdom to honour Daniel’s God (verses 26-27).

Ask younger children what noises that various animals make. Finally ask them what sound a lion makes. Once they have given you some good roars then tell them that some lions sound like this: mmmm (hold your lips together and try to roar). That’s how the lions in today’s story sounded.
top

Cyrus, the emperor of the great Medo-Persian Empire conquered the Babylonian Empire. He appointed a man named Darius as the new King of Babylon.

King Darius wanted to appoint the best men to be his new government leaders. He noticed a Jewish man named Daniel. Daniel was a very hard worker. He was trustworthy and he never cheated anyone. Daniel always acted responsibly. King Darius appointed Daniel as a special helper to the king.

Daniel worked very hard for the king. He was never lazy. He always tried to do his best. One of the reasons Daniel did such a good job was that he knew that God would want him to work with all of his heart. Soon, Daniel was doing such a good job that King Darius decided to make him ruler over all of the other helpers in the kingdom.

King Darius liked Daniel but the king’s other helpers did not! They thought the king favoured Daniel over them. They wanted to get Daniel in trouble. They kept trying to find Daniel doing something wrong so they could tell Darius. But they could never see Daniel doing wrong. Daniel always worked hard. He loved God and he prayed to God.

Finally the king’s helpers came up with a plan to get rid of Daniel. If they could get the king to make a law about praying to God then they could trap Daniel.

King Darius liked this idea. He felt very important. He wrote the law down and signed it. Since the king signed it everyone had to obey it. It was the law of the Medes and Persians that once a king signed a law then it could not be changed. The king could not even change it.

When Daniel heard about the new law he was very sad. He had always tried to do his best to serve the king but he knew that he could not pray to King Darius. That would be wrong. He could only ever pray to the one true God. Usually Daniel prayed to the Lord three times each day. He decided to keep praying like he always did.

But this time the king’s other helpers were ready! They had been watching Daniel and they knew when he prayed. They went straight to the king and told him about it.

King Darius was very sad. Now he knew that his helpers had tricked him but he could not change the law. He ordered Daniel thrown into a lion’s den. Before he put Daniel inside he said to Daniel, “May your God, whom you serve continually, rescue you!”

Daniel must have been very frightened when he was put with the lions. Lions could eat him up! Then it got very dark! It got dark because a stone was rolled over the entrance of the den. A seal was put on the stone and wax melted onto it. The king pressed his ring into the wax to form a seal. When anyone looked at the seal they would know that no one was allowed to move the stone and help Daniel.
During the night the king could not eat or sleep. He kept thinking about his helper, Daniel. Early the next morning the king rushed to the lion’s den. When he got near the entrance he yelled out to Daniel, “Daniel, was your God able to save you?”

Then the king heard Daniel’s voice. He was alive! Daniel said, “During the night the Lord sent an angel to come and shut the lions’ mouths. It is a miracle, I am alive!”

When Daniel was taken out of the den there was not one scratch on him. The king was so happy that Daniel was alive. He was not happy, however, at his other helpers. He did not like it because they had tried to trick him. He ordered all of the bad helpers to be thrown in the lion’s den.

Then King Darius ordered that everyone must show respect to “Daniel’s God.”
top 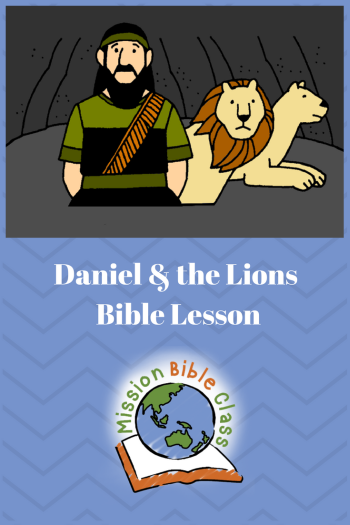