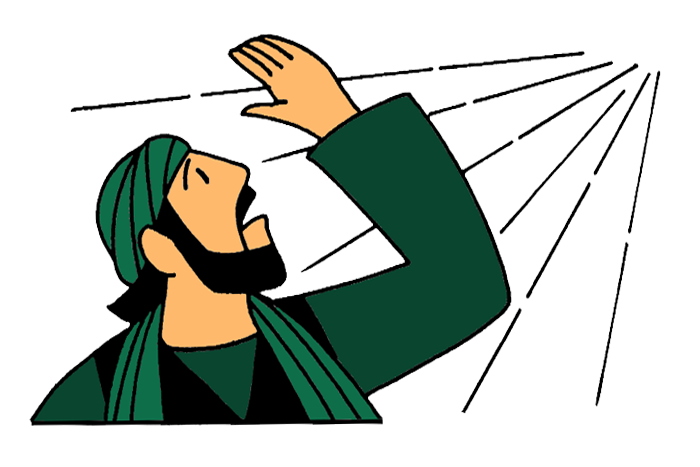 Suggested Emphasis: When we are wrong we should admit our mistakes and change to do things right now.

Saul (later known by his Roman name, Paul) was an extremely zealous Jew who believed that those who followed Jesus were blaspheming God.  He even hunted for Christians so he could arrest or kill them for what they believed. Saul had to face the fact that he had been wrong all of his life when Jesus came to him on the road to Damascus and blinded him with a bright light. Saul continued to the city of Damascus where he regained his sight and was filled with the Holy Spirit.  He was baptised by a Christian named Ananias.  Saul immediately began preaching the truth about Jesus and this made some people angry.  His friends snuck him out of Damascus in a basket.  After preaching in Jerusalem he had to escape danger there too.  Saul changed from hating Jesus to loving Jesus.

Saul will later be known by his Roman name, Paul, but he is first introduced in Acts by his Jewish name, Saul.

The New Testament contains many writings eventually produced by the man who was later known as the Apostle Paul.  Most of these writings are in the form of epistles, or letters, to churches and individuals.  Reading these letters reveals much about Saul but it is in Acts that we read how he was personally visited by Jesus and assigned the task of taking the Gospel to the Gentiles.

Saul was a zealous Jew who had been born in the city of Tarsus but grew up in Jerusalem.  He studied under the best Jewish teachers including the well-respected teacher, Gamaliel (Acts 22:3).  The first time Saul is mentioned in the New Testament is in Acts 7:58 and 8:1.  Saul stood in approval of the Stoning of Stephen and went so far as to watch after the clothes of those who threw the stones.   Following that time Saul became zealous in trying to stamp out this new group of people (called “The Way”) who were leaving the Jewish religion to follow Jesus.  But no matter how Saul and others persecuted those who followed Jesus the group kept getting bigger and bigger.

Saul’s was zealous but the type of violent religious fanaticism he practiced drove him to act beyond reason.  Understanding this gives real meaning to the drastic change that was about to take place in his life.  What happened on the Road to Damascus was a miracle of God.

Among many others there are two significant things to note.  Firstly, Jesus considers persecution of his followers as persecution of himself.   Years later Saul, himself, will explain that Christians are the “body of Christ, and each is a part of it.” (1 Corinthians 12:27).  As Christians, if someone hurts you or me then Jesus feels our pain.

Secondly, Jesus was actually with Saul on that road.  This was not simply a vision of Jesus.  It is important to note this because Saul’s legitimacy as an apostle rests on the fact that he was an actual witness of Jesus (1 Corinthians 9:1 and Galatians 1:11-16).

The opening words of this chapter “Saul was still breathing out murderous threats against the Lord’s disciples” paints a graphic picture of what Christians thought of Saul.  If Jesus had not come to Ananias in a vision in Damascus then Ananias would certainly not have risked his life to meet Saul. Jesus directed him to find Saul to a home on Straight Street.   This street still exists today in Old Damascus.

Now, the great persecutor of the church finally understood that Jesus was real and that everyone needed to hear about him.  At this point of understanding Saul regained his sight and was baptised.   This event must have remained solid in his memory in years to come when he preached and wrote reflections such as those in Titus 3:3-7.

Saul would have been a real enigma.  The synagogue leaders would have been confused by this educated Jewish leader now seeming to speak in favour of the very thing he had so recently been militant about.  And the newly converted Christians would surely have been fearful and sceptical of a man who had been terrorising their fellow believers.

Although this section reads as a continuous narrative it is most probable that during the three years following his conversion Saul left Damascus for Arabia and then came back to Damascus again before leaving for Jerusalem.  The three years in Arabia could fit between verses 22 and 23.  He later recounts the sequence of events in a letter to the churches of Galatia (Galatians 1:11-18).

Saul returned to a very angry situation after the his three years in Arabia.  We learn from one of his later letters that the governor in Damascus had the city guarded so they could arrest Saul (2 Corinthians 11:32-33).  A wall surrounded the city so Saul’s followers put him in a basket and lowered him out through a window in the wall.

Saul attempted to join the disciples of Jesus in Jerusalem but need the help of Barnabas to convince others to accept him.  Barnabas took him to the apostles and spoke on Saul’s behalf.  (Read more about Barnabas and Saul in the stories like the Antioch Church and Paul’s 1st Missionary Journey)

Saul stayed under the protection of the apostles.  His background and education allowed him to move in the more educated circles and even participate in debates about Jesus.  There was soon so much angry opposition against Saul that the Christians again had to get him out of the city.  They sent him to Tarsus.

Persecution had scattered Christians and they shared the message of Jesus wherever they went.  Now there was a period of peace.  The Way, or Christian movement, grew in numbers during this time.

“What would you do if you heard that there was someone in our town who was trying to hurt all Christians? We might have to meet in secret places. If you heard that that person was close by what would you do? You might have to use secret codes to tell other Christians where to meet. Has anyone ever seen a fish symbol like this? (Draw it on the board) Christians used to use that secret symbol to represent Jesus. That way mean people didn’t know what they were talking about. In the book of Acts we read about many people who became Christians. There were also some people who got very angry that anyone would follow Jesus. One man, Saul, got so angry that he even killed Christians.”
top

Saul was born in the city of Tarsus but he grew up in Jerusalem.  Saul was very intelligent and he had studied under a famous teacher named Gamaliel.

Saul’s other name was “Paul”.

Even though Saul believed in God he did not follow Jesus.  He was an enemy to people who followed Jesus.

Saul wanted to destroy the church.  He even dragged men and women out of their houses and put them in prison for believing in Jesus.  Christians were very afraid of Saul.

Once, Saul asked the High Priest in Jerusalem for letters so he could take them to the leaders in the city of Damascus.  The leaders would help him arrest Christians there.

But when Saul was walking along the road to Damascus something totally unexpected happened.  A bright shown down on Saul and made him blind.

Then Saul heard a voice say, “Saul, Saul, why are you persecuting me?”

Saul heard the voice but could not see.  “Who are you?” he asked.

Then he heard the answer, “I am Jesus, and you have been persecuting me.  Now get up and go into the city.”

Saul was shocked.  This was Jesus!  He had been hurting (persecuting) people that believed in Jesus.  Now Saul knew the truth.  He had been very wrong all of this time.

The other men traveling with Saul saw the light but could not hear the voice.  Since Saul was blind they led him to the city of Damascus.

Ananias was a Christian man who lived in the city of Damascus.

Jesus came to Ananias in a vision and said that Ananias should go and meet Saul.  He would be waiting in a house on the street called “Straight Street”.

Ananias was very frightened.  “But Saul has been persecuting Christians.”  Ananias must have wondered what Saul might do to him.

So Ananias went to Straight Street and found Saul.  He touched Saul and said, “Brother Saul, Jesus, the one who appeared to you on the road, has sent me so you can see again and be filled with the Holy Spirit.”

As soon as Ananias said this something like scales fell from Saul’s eyes and he could see again.  Then he got up and was baptised.

Now that Saul knew the truth about Jesus he wanted to tell everyone.  He preached to the people in Damascus and even travelled to Arabia to tell the people there.

But not everyone was happy Saul was preaching about Jesus.  They began guarding the city gates so they could catch and kill Saul if he tried to leave the city.

But Saul’s friends had a great idea.  Late one night they put Saul in a basket and lowered him over the wall.  Saul escaped!

Even though Saul had changed there were still many Christians that remembered how he had once been their enemy.  In Jerusalem the Christians did not trust Saul and did not want him to be with them.

But a Christian named Barnabas believed Saul had changed.  He asked the Apostles and the other Christians to accept Saul.

So Saul continued to do what Jesus had told him to do.  When he used to live in Jerusalem he told people NOT to follow Jesus.  Now he told them that they SHOULD follow Jesus.

Soon Saul was in trouble again.  The other Christians took Saul to the port of Caesarea and put him on a ship heading to Tarsus.

After this time there was a time of peace for the churches.  Many more people began to follow Jesus.

When Saul met Jesus he stopped doing bad things and began to follow Jesus.  What do you think Jesus wants you to do?
top

©2011-2020 Mission Bible Class. Permission to use for personal or ministry purposes only. Not to be resold. www.missionbibleclass.org