Balaam and His Donkey 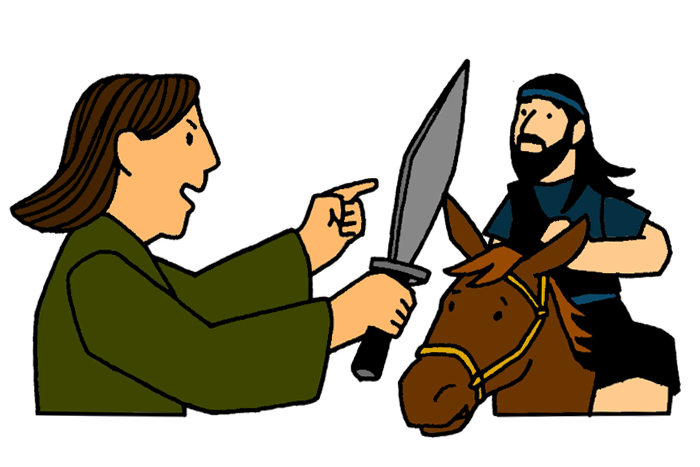 Suggested Emphasis: God does not want us to say bad things about His people but to say things that build them up.

Memory Verse: “Do not let any unwholesome talk come out of your mouths, but only what is helpful for building others up according to their needs, that it may benefit those who listen”. Ephesians 4:29

Enemies of the Israelites paid money to a sorcerer named Balaam so that he would call a curse on God’s people. The Lord spoke to Balaam but Balaam did not listen very well. As Balaam and his donkey travelled along a road, an angel of the Lord blocked the path of the donkey. When Balaam beat the donkey, God miraculously caused the donkey to talk to her owner. Finally, Balaam saw the angel and realized what had happened. He ended up blessing the Israelites instead of cursing them.

Unfortunately, children in Christian families are sometimes familiar with unwholesome talk. It is sometimes tempting for adults to speak negatively about the church or our fellow Christians. Too many times, children are listening while negative things are being said. We must remember that the things we say help shape our children’s view of the church and people. We can help our children grow up seeing the positive things about the church—no matter what difficulties the adults face. In today’s story we will learn about Balaam and how he was paid money to curse the people of God. Balaam finally learned how to say good things about God’s people.

Balaam is a complex character. Micah (Micah 6:5) later looks back at today’s incident and writes that Balaam stopped King Balak from doing evil. On the other hand, Balaam is portrayed negatively in Deuteronomy 23:3-6. Balaam’s life certainly ended in disobedience. He was killed in battle after somehow being involved in advising people who turn away from the Lord (Numbers 25; 31:8-16). Nevertheless, in today’s story he seems to learn a lesson and do what the Lord commands.

In Numbers 21:10-35 we read about how the Israelites were unfairly attacked by the Amorite king. The Lord helped his people defeat the Amorites and conquer other kingdoms in the area. Balak (king of Moab) witnessed the Israelites defeating his neighbours and he became so nervous that He decided to hire a professional seer to curse the Israelites (Numbers 22). Balaam had a reputation for bringing down curses or blessings on armies. Whether there was some supernatural power involved or not, Balaam was accurate in his predictions. Perhaps this could have partly been due to a careful selection of “customers”. He might have only chosen to work for those whose future seemed apparent. He did not immediately agree to accept money from King Balak. Perhaps he wanted to do a little investigation of the situation.

Until the time of this incident, any god would do for Balaam. Surely Balaam was shocked to hear the Lord speaking to him (22:9-12). The Lord tells Balaam not to go with king Barak’s men (22:12-14). After Balaam sends them away, they return with more money. Balaam refuses to go with them but then the Lord tells him to go (22:15-20).

(22:21-39) Balaam saddled his donkey and began the journey. It is not clear why the Lord was angry about the way Balaam carried out his instructions, but he blocks Balaam’s progress. He sends an angel to stand in the path of Balaam and his donkey. Three different times the donkey refuses to go past the angel. Each time she is beaten. Finally, on the third beating, the Lord miraculously caused the donkey to speak. Balaam had claimed to hear voices before but never had he expected to hear his donkey!

The Lord then tells Balaam that the donkey saved his life. If the donkey would not have stopped, then the angel would have struck Balaam dead. Balaam is instructed to carry on and only say good things when he gets to Moab. Perhaps this man who makes predictions is learning that only God really knows what is going on.

(23:1-12) Balaam has King Barak build seven altars and sacrifice animals on each. Barak then asked Balaam to curse the Israelites. The Lord put words in Balaam’s mouth and caused him to bless them instead.

(23:27-24:14) In this third speech the Lord does not have to put words in Balaam’s mouth. He renounces the sorcery that he has always used (24:1) and freely blesses the people of the Lord. Barak refuses to pay him and sends him home.

(24:15-25) Before leaving, Balaam prophesies that the Israelites will crush their enemies. He even prophesies doom to individual kings who were there.

Draw a very simple donkey outline on large paper (or chalk/white board). Provide “tails” and a piece of blue tac for each child. Blindfold the children one at a time and let them tac the tail on the donkey. See who gets the closest. “In today’s story we are going to learn about a man who had a donkey. Who knows what sound a donkey makes? (Let the children answer) The donkey was able to do something no other donkey has ever done.”
top

The children of Israel were a mighty nation. As they wandered through the wilderness and the desert, many other nations came to fear them. They fought and won many battles. They captured cities and conquered the enemies of God who attacked them. One of the nations who wanted to hurt Israel was known as Moab. When the Moabites saw the great number of people and heard of the victories they had won, they became very worried. The Moabite King was named Balak. He decided to do something about the Israelites.

In those days, people believed in magic and evil spirits and curses. King Balak believed in these things. He knew of a sorcerer, named Balaam, who cursed people. That meant that he would say bad things and wish for bad things to happen to them. Many people believed that terrible things happened when Balaam cursed anyone.

King Balak sent men to ask Balaam to curse God’s people. The king’s men offered Balaam lots of money to come with them to the Israelite camp and curse them. Balaam really wanted the money so he told the king’s men that he would ask the Lord. Balaam probably did not really believe in the Lord but he wanted the men to believe that his curses really worked. Balaam must have been very surprised when the Lord really did answer him! The Lord told Balaam not to take the money from King Balak. He did not want Balaam to ever say bad things about the Israelites. Balaam did not take the money and he did not go with the king’s men.

When the King heard about this, he told the men to go back to Balaam and offer him even more money. This time the Lord told Balaam to go with the men. The king’s men thought Balaam would curse the Israelites but God had a special plan for Balaam. He wanted to show Balaam that the Lord is more awesome than magic or the evil spirits that Balaam said he believed in.

Balaam put a saddle on his donkey and began riding toward the Israelite camp. As Balaam and his donkey were travelling along, an angel stood in front of the donkey. Balaam could not see the angel but the donkey did. The donkey walked off of the path so she would not run into the angel. Balaam became angry so he beat the donkey with a stick.

After that Balaam got back on his donkey and started riding again. Balaam’s donkey saw the angel again but Balaam still could not see it. The angel had a sword in his hand and the donkey pressed against a wall to try to get out of the way. Balaam’s foot got caught against the wall and was crushed. He was even angrier at the donkey so he beat her again.

Then Balaam got back on his donkey and rode on until they came to a narrow place in the road. The angel appeared to the donkey again. This time there was not room to go anywhere so the donkey just sat down in the middle of the path. Balaam could not believe it! What was wrong with his donkey? He was just about to hit the donkey again when an amazing thing happened. His donkey began to talk to him!

“What have I done to make you beat me three times?”

Now the angel appeared to Balaam too and said, “Why do you keep beating your donkey? If she would not have kept stopping, I would have killed you by now.”

Only God could make a donkey talk and an angel appear! Balaam realized that the Lord was angry with him. Now he would do exactly what the Lord said to do.

When Balaam met King Balak at the Israelite camp he did not curse the Israelites. He only said good things about them. He blessed them and talked about how good the Lord was. He did not say one bad thing. He even had alters built so he could worship the Lord. King Balak was angry. This is not what he had planned at all! He wanted Balaam to say bad things but Balaam only said good things.

King Balak was unhappy but the Lord was pleased. He loves His people and he wants everyone to say good things about them.
top 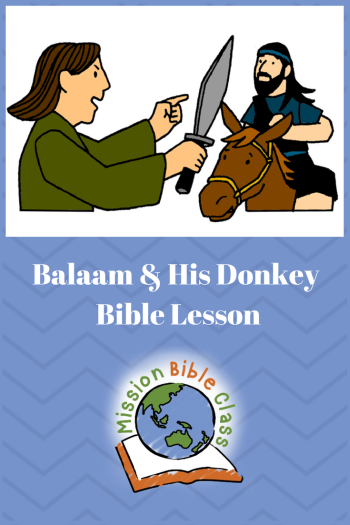