Conquering the Land and Fighting Giants 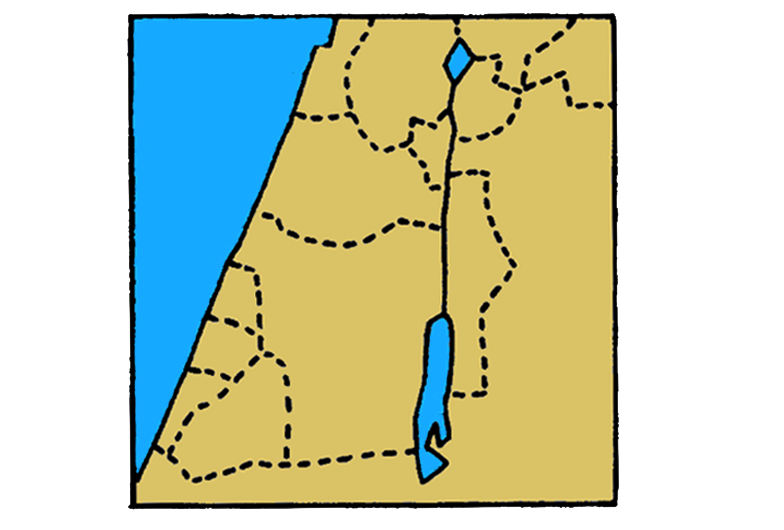 The Lord had promised Abraham, long ago, that He would make Abraham’s descendants into a great nation (Genesis 12:1-3). The promise had passed down through many generations. Now the people possessed all of the Promised Land. When the Lord told the Israelites to divide the land, Caleb had a special request of Joshua. Caleb was an old man, but he still remembered forty-five years before when he was one of the twelve spies who had spied out Canaan. Because Caleb had had faith that God would help Israel conquer the land (even though the enemy seemed liked giants), Moses had promised him land. Although he was old, Caleb still believed that the Lord could help him fight the enemy. The Lord told Joshua to give the land of Hebron to Caleb. Caleb did indeed overtake the enemy and occupy Hebron.

Even though the Lord had given the new land to His people, they were still required to physically possess it. This meant that they had to conquer the nations that were living there. Israel gained control through two primary campaigns, the first one to the south and the second through the north. The southern campaign dragged on. In all, it took nearly seven years for the land to be subdued.

The tribe of Levi received no land inheritance. Their inheritance was a share of the sacrifices (portions not consumed by fire in the actual sacrifice act—Joshua 13:14). They were to live in assigned cities within the lands of the other tribes (Numbers 35:1-8;   Joshua 21).

Joshua chapters thirteen through nineteen record how the land was divided. We will highlight Caleb’s story in today’s lesson but the following is a list of chapters concerning the other tribes:

Caleb had been about forty when he first entered Canaan as a spy. Because of his good report, Caleb was promised the land of Hebron as his reward.

Forty-five years had passed since the spies returned, and it was now time to divide up the land. Joshua and Caleb were the oldest Israelites. All Israelites who had been over the age of twenty when the people refused to enter the land died during the wilderness wanderings. Only Joshua and Caleb had been exempt from that punishment (Numbers 13-14). A leader as old and highly respected as Caleb could have left it to the younger men to conquer the country where the giants lived, but not Caleb. He knew that God could and would help him even though, by human standards, he was a very old man at eighty-five.

Caleb must have remembered the Anakites  from the days when he was a spy (See 12 Tribes and 12 Spies).  The other spies reported on the strength of the Anakites and that the Israelites were like “grasshoppers” in comparison (Numbers 13:31-33).   Whether they were physically big or “giants” through their power, Caleb is not afraid to go and take the land from them (Joshua 14:10-12).

Joshua granted his request, and Caleb drove the giants out. Caleb wasn’t afraid of anything the Anakites could do, because he knew what God could do. He did not use his age as an excuse to stop working for God. He trusted in God, and God gave him victory. Caleb had trusted in God as a young man and he continued throughout his whole life.

Children need to see examples of elderly people who still live a full life for the Lord.

Find out the ages of some of the elderly people in your congregation. Find newspaper articles about elderly people. Let the children share the ages of some of the oldest people they know. Spend a little time discussing the way things must have been when these people were the ages of the children in your class. “The oldest two people in Israel at the time of today’s story were Joshua and Caleb. They didn’t say, ‘I’m old now, I think I will stop loving God and doing things for Him.’ Joshua and Caleb kept doing things for God even though they were very old!”
top

Long, long ago the Lord promised to give His people their own land. He made the promise to Abraham, Isaac, Jacob, Jacob’s 12 sons, Moses, and to Joshua. After all of those years, the Israelite people were in their own land. They fought many battles but the Lord helped them.

There was one man in Israel who remembered a very special promise that Moses had made to him. Caleb came up to Joshua and said, “Joshua, do you remember a long time ago when Moses sent you and me into Canaan as spies? Do you remember how we came back and told Moses all about how good the land was?”

“Even though all of the other spies did not have enough faith to conquer the land. Only you and I did. Do you remember how I told Moses I knew we could take over the new land because God would help us?”

“And do you remember how Moses said that I could have part of the new land, because I always follow God and do what He says?”

“That was forty-five years ago,” said Caleb. “Now I am eighty-five years old. But look at me, Joshua I am as well and strong now as I was back then. And I can do all the things now that I could do back then, because I always follow god and do what He says!”

I know I am old but I still want to follow God. I don’t want something easy to do, Joshua; I want something hard! Do you know that mountain near Hebron? It has people living on it who are as big as giants! But I know it is the land God wants me to have, and I know He will help me against those giants!”

“Yes,” Joshua said to Caleb, “God will help you, because you always follow Him. Go and take the land, Caleb. You can fight the giants and then you can have the land.”

God did help Caleb send away those giants and take over the mountain. Then Caleb took all his family to live with him there for the rest of his life. He kept following God and doing what God said, and God was always with him.

Joshua was happy that he had been able to lead the people of God into their own land. Now Israel possessed all of the land that the Lord had promised. He hoped that the people would always remember to follow God. If they followed the Lord then the Lord would always protect them and take care of them.
top 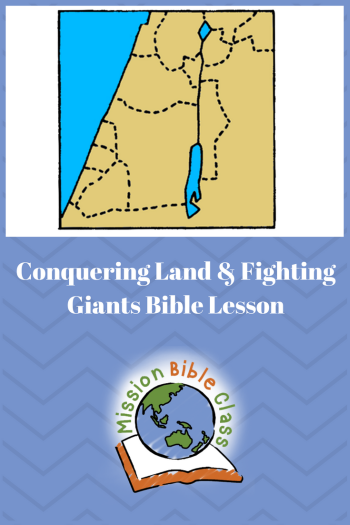