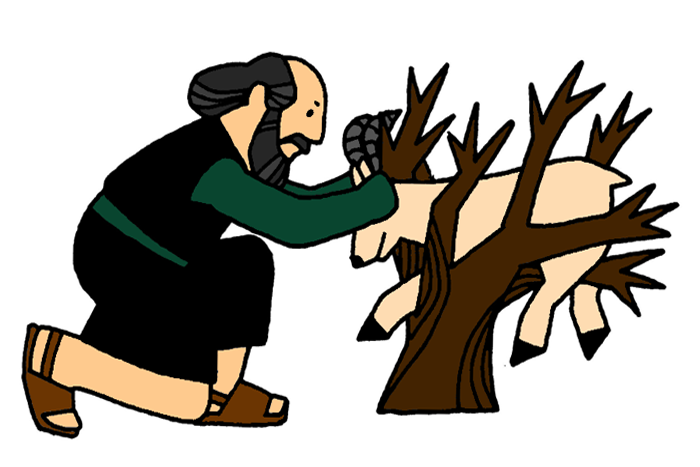 Suggested Emphasis or Theme: We should be willing to give up (sacrifice) anything if it will help us to serve God better.

Abraham’s faith was tested when the Lord asked him to sacrifice Isaac on an altar.  Abraham had strong faith in God’s earlier promise that he would have many descendants so he set out to prepare an altar and kill his only son.  At the last moment, when Abraham displayed this willingness to unconditionally obey God, an angel stopped the sacrifice.

If you have set out to teach the Bible to children then you will probably find this story difficult to tell.  That a father would kill his own son is beyond belief.  This, in fact, is what faith is.  It is beyond belief.  Faith looks beyond the present situation and looks toward something that is not seen. (Hebrews 11:1)

The intense emotional drama of this Biblical event displays exactly how far Abraham had come in his absolute trust in God.  He trusted God so much he knew that, if he killed his son, God would raise him from the dead.

“By faith Abraham, when God tested him, offered Isaac as a sacrifice. He who had embraced the promises was about to sacrifice his one and only son, even though God had said to him, “It is through Isaac that your offspring will be reckoned.” Abraham reasoned that God could even raise the dead, and so in a manner of speaking he did receive Isaac back from death.”  Hebrews 11:17-19, NIV

Believing through faith that God would raise his son from the dead was one thing but Abraham takes this to the ultimate level by actually lifting up that knife to plunge it into his son’s body.  No wonder James will later uses this event as an example of how faith and action go hand-in-hand and how action makes faith complete.  (James 2:20-24)

God led Abraham from Beersheba to the “region of Moriah” and to the “Mount of the Lord” (Genesis 22:14) to perform this sacrifice.  This is where the city of Jerusalem would later emerge.  King Solomon also built the temple here (2 Chronicles 3:1).

Today both Jews and Muslims mark the traditional specific location as the Foundation Stone in what is now the Dome of the Rock in Jerusalem.  Jewish tradition is that this was where Abraham sacrificed Isaac and where the “Holy of Holies” portion of the temple originally stood.

This was to be a burnt offering as later described in Leviticus chapter 1.  When an animal was offered by burning it on an altar the sacrifice “represented complete dedication and surrender to God.”  The animal was killed and then burnt until nothing was left. (As described in “The Tabernacle”, Rose book of Bible charts, maps, and time lines. (2015). Torrance, CA: Rose Publishing.)

Once it was clear to Abraham that he would not be sacrificing Isaac on the altar the Lord provided a ram for him to substitute and show his complete dedication and surrender to God.

In today’s lesson talk about how our faith is demonstrated in our willingness to surrender everything to God.  For a child this is best understood in terms of what things are important to us in life and comparing those to the importance of obeying God.

Ask for volunteers to be blindfolded. Tell them to open their mouth because you are going to give them something to eat. “Do you trust me? What if I am giving you a yucky worm or a rotten apple to eat?” Continue in this train of thought for a little while and then put something VERY tasty in their mouth (lolly-pop, biscuit, etc.) Discuss what it felt like to trust someone when you did not know what they were going to do. “Abraham trusted God even when he did not understand what God was going to do.”
top

Many, many years ago God decided to build a great nation so that this nation could follow him and bless the world. God chose Abraham as the man that would begin this nation.

Abraham believed God but, as the years went by, he and his wife, Sarah wondered how God would make this happen. They were getting older and older and they still had no children together.

But, of course, God kept his promise!

Finally, when Abraham was 100 years old and Sarah was 90 years old they had a baby. They named their son Isaac.

Abraham loved his son and loved God. Even though Abraham loved God and believed what God said a day came when Abraham was tested. The testing day was the day God asked Abraham to do a very difficult thing.

During the time of Abraham people showed their devotion to God by placing food or sometimes an animal they had killed on an altar and burning it up. This was called a “sacrifice”.

God said, “Take your only son, Isaac, the son you love. Go to the land of Moriah. There kill him and offer him as a whole burnt offering. Do this on one of the mountains there. I will tell you which one.”

And that is when Abraham realised something very important. God would always do the right thing. If he obeyed God, even in this very hard thing, God would make it all right in the end. He thought that maybe God would let Isaac die but then he would bring him back to life.

Abraham did not understand exactly what would happen but he had faith in God. He would do what God said.

When Abraham and his son got to the top of the mountain they stacked stones on top of stones to build an altar. Isaac asked his father what animal they would put on the altar. Only Abraham knew that Isaac would be the one on the altar instead of an animal.

And then the time came for Abraham to do what God said and kill his son. But do you think Abraham actually killed his son? No, he did not. At the last minute an angel called out in a loud voice and told Abraham to stop. Even though God knew that Abraham had enough faith to obey him God did not want him to actually kill Isaac.

What a relief! God would never want a person to be killed and burned on an altar. Abraham looked up and saw a ram caught in some bushes. He and Isaac offered the ram as a sacrifice on the altar.

On that day Abraham learned that he loved God more than anything else. He would always have faith in God.

As years passed the number of Abraham’s descendants became so many that they were as difficult to count as the number of stars in the sky.
top 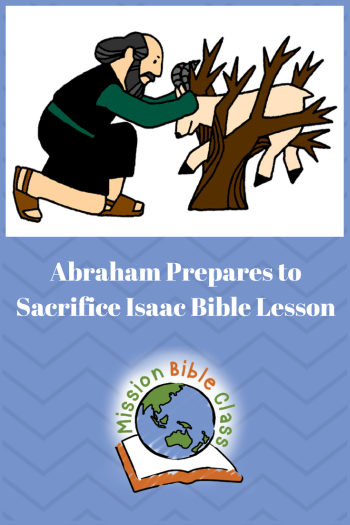