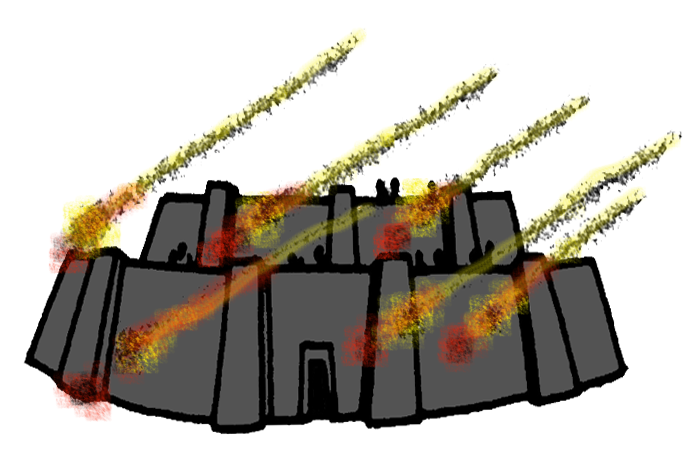 Suggested Emphasis or Theme: Sin is a word, thought, or act against God.

Memory Verse: “Trust in the Lord with all your heart and lean not on your own understanding.” Proverbs 3:5

Upon learning  that the Lord was about to destroy the wicked cities of Sodom and Gomorrah Abraham bargains with God to spare the city if he could find just ten righteous people.  But only one man, Lot, was found righteous and the cities were destroyed.  As Lot and his family fled the city Lot’s wife turned and looked back at the city despite being warned not to.  She turned into a pillar of salt.

Abraham, the courteous host, accompanies his guests for part of the way on the road toward Sodom. Because of his special relationship with Abraham, the Lord decides to allow him a special glimpse of His plans to destroy Sodom and Gomorrah. The sinful reputation is well known to the people of the area. Sin has become so rampant that the Lord knows that there is no hope that the people will repent.

Abraham must have heard about the sin in the two cities. Years before, when Abraham’s nephew, Lot, moved to the area near Sodom, we first heard about the reputation of the men of Sodom. “The people of Sodom were wicked and were sinning greatly against the Lord.” (Genesis 13:13) Years after Lot moved Abraham and his men had to rescue him from one of Sodom’s enemies. When the King of Sodom wanted to reward Abraham, Abraham refused to take money from the wicked king.

Despite all of this, Abraham knew that the Lord was about to destroy his nephew’s city. Abraham tries to bargain with the Lord. The Lord agreed to spare Sodom if He found fifty righteous people there. Abraham kept lowering the number until the Lord finally agreed to spare Sodom if there were ten righteous people residing there. This seemed like so few people that Abraham must have felt secure that he had saved Lot’s city from being destroyed. The truth was that only Lot and his immediate family were righteous.

When the two angels arrived in Sodom they planned to sleep in the city square. The men of the city were so perverted that Lot knew that the angels would not be safe. He took them into his own home. In Jewish custom, taking someone into your home meant that you were vowing your complete protection. It seems incredible to us that Lot would have offered his two daughters to the men who begged him to send the two “men” (angels) out so that they could have sex with them. Such was the commitment of protection that Lot was offering the strangers. When the men of Sodom attacked Lot and tried to break down his door, the angels pulled Lot inside and struck the men blind.

Obviously, there are not ten righteous people in Sodom. The angels told Lot to gather his family and leave the city. The fact that even the men engaged to Lot’s daughters did not take Lot seriously, shows that Lot had no influence in the city. The people there were so tangled in sin that they would not even listen to Lot.

Lot, his wife and two daughters hesitated. Perhaps they had trouble believing this was actually going to happen. Perhaps they were tied to Sodom and found it difficult to leave their home. The angels grasped their hands and led them away. One of them told them, “Flee for your lives! Don’t look back and don’t stop anywhere on the plain! Flee to the mountains or you will be swept away!” (19:17) Lot begged to be allowed to stop in the nearby city of Zoar. He was afraid that they could not make it to the mountains in time. The angels agreed to the plan.

When Lot and his family arrived in Zoar, Sodom and Gomorrah were destroyed by burning sulphur which “rained” down from the sky. Lot and his daughters believed what the angels had said. They understood that Sodom and Gomorrah would be destroyed and that they should not look back. They accepted the will of God. Lot’s wife must have been sad that Sodom was being destroyed. By looking back, she revealed that she did not want to leave the sin of the city. When she looked back, she became a pillar (column) of salt (19:26). Hundreds of years later, Jesus uses Lot’s wife as an example of one who tries to keep their old life instead of accepting God’s judgment and will (Luke 17:32-33).

This story underlines the horrible nature of sin. Children in your classes will be too young to discuss the more graphic mention of acts of homosexuality in the story. They can, however, understand that the people of Sodom and Gomorrah sinned. Your students need to know that sin is a word, thought, or act against God. The people in these cities were so entrapped in sin that they would not even listen to Lot when he told about God. The Lord knew their hearts and that they would not change.

And God also punished the evil cities of Sodom and Gomorrah. He burned those cities until there was nothing left but ashes. He made those cities an example to show what will happen to those who are against God.

But God saved Lot from those cities. Lot, a good man, was troubled because of the sinful behavior of evil people.  (Lot was a good man, but he lived with evil people every day. His good heart was hurt by the evil things that he saw and heard.) 2 Peter 2:6-8 (ICB)

In 2 Peter 2:6-10a Peter uses Lot and Sodom and Gomorrah as an example of how God is able to discern good people living among the bad.  But still, living among evil causes much pain and sorrow.  The International Children’s Bible translation is that Lot’s “good heart was hurt by the evil things he saw and heard.” (2 Peter 2:8)

Bring fishing line or thin string to class today. Unwind it and let the children “tangle” it all up. When it seems to be a hopeless mess then ask them to untangle it. Ask them how long it would take to untangle the string before it could be used for fishing. Discuss the option of just buying new string. “In today’s bible story we are going to learn about two cities whose people kept sinning over and over again so much that they became tangled in sin just like this string. They were so tangled up in sin that they would not even listen when people talked about God. Guess which city that was? It was the city where Lot had moved to. In this story we are going to learn how Lot was very sorry he had ever chosen to live in a place where there was so much sin.
top

The three visitors who came to Abraham with such good news also had other news. It was not so good. One of the three visitors was the Lord. As the men turned to go to Sodom, the Lord stayed to talk to Abraham. He told Abraham that the people in Sodom were so wicked and evil that He had come to see for Himself if what they were doing was really true. God hates sin very much. Sin is what it means when a person does, says, or thinks something that is against God. The sins of the people in Sodom made God very sad and unhappy.

Abraham did not want the Lord to destroy the city where his nephew, Lot, lived. There must be some good people in the large city. “If there are fifty good people in Sodom, would you please let everyone live?” Abraham asked the Lord.

The Lord said, “Yes, Abraham, if there are fifty good people in Sodom, I will not destroy it.”

“Will you keep Sodom safe if there are only forty-five good people?” Abraham begged.

“Yes,” said the Lord, “if I find just ten good people, I will not destroy Sodom.”

The Lord stopped but the two angels continued on to the city. As the two angels came to Sodom they saw Lot, Abraham’s nephew, sitting by the gate. When he saw the two men approaching, he jumped up and asked them to come to his house for tea. The men went with him and rested at his house. Lot was kind to them. The men realized that Lot was not wicked like the other people living in the city. Since he was Abraham’s nephew, they told him of their plans. The men told him to take his family and leave Sodom, because they were going to send fire and destroy the city.

When it was close to morning, the men told Lot and his family to leave the city as quickly as they could. Lot tried to get others to stop being wicked. He wanted to save them, too, but they just laughed at him. They did not believe anything would happen to them.

The angels took Lot, his wife, and two daughters by the hand and led them from Sodom. The angels told them they MUST NOT look back to see what was happening to the city. They must run and run as fast as they could to get away. Lot and his family hurried away from the wicked city. They ran to a small city named Zoar. As the sun rose over the land, the Lord sent burning fire over Sodom. It came down like rain on the city. He destroyed all the cities of the plain because He hated the sin of the people. Even the city next to Sodom was destroyed. That city was called Gomorrah. As the fire rose and smoke filled the air, Lot’s wife looked back toward Sodom. She did not listen to the words of the angels. She disobeyed and was turned into a pillar of salt.

God destroyed the wicked cities because He hates sin so much. When people do or say or think bad things, it makes the Lord sad and angry. He wants people to be sorry when they do bad things. He wants to forgive people when they sin. The people of Sodom and Gomorrah sinned so much that they stopped listening to good people like Lot. They did not trust in God. They only wanted to do things their own way.

God will help us do good if we listen to Him. We should read our bibles and learn more and more about Him. The bible tells us how to do good things and make God happy.
top 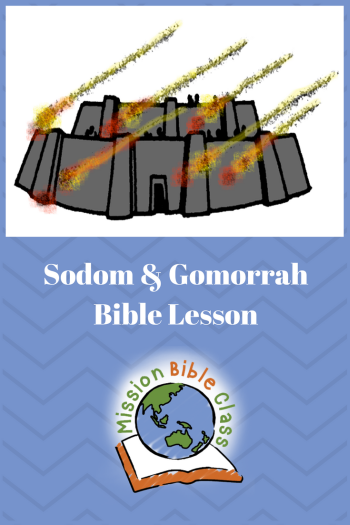